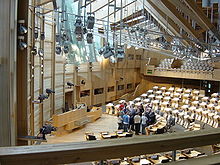 Interior view of the Scottish Parliament

As devolution describe British policy and constitutional theory a shift of political powers of the Houses of Parliament away to elected representatives in Scotland , Northern Ireland and Wales . These decide on health policy , schools , housing policy , agricultural policy and fisheries , environmental protection , tourism , sport , cultural goods and economic development . England does not have its own regional parliament.

The devolution culminated for the time being with the establishment of Scottish , Welsh and Northern Irish parliaments in 1998. These new foundations followed referendums held by the newly elected Labor government under Prime Minister Tony Blair as a result of an identical election promise. The constitutional start of this process, however, marked parliamentary disputes over Irish autonomy within the United Kingdom of Great Britain and Ireland towards the end of the 19th century. Further devolution efforts are conceivable as part of a Scottish independence referendum or a solution to the West Lothian Question .

“How long will English constituencies and English [MPs] tolerate at least 119 [MPs] from Scotland, Wales and Northern Ireland having a tangible and often decisive impact on English politics while not having a say in Scottish, Welsh and Northern Irish affairs to have?"