The Aztec Stadium ( Spanish Estadio Azteca ) is a football stadium in the Coyoacán district of the Mexican capital Mexico City . The venue, which opened on May 29, 1966, currently offers 81,070 covered seats. The stadium has been home to the Club América football club since it opened . The CD Cruz Azul has been using the system again since 2018. It is one of the world's largest stadiums for football matches. The sports facility was the only one to host the opening and final of the soccer World Cup twice (1970 with a maximum of 107,494 spectators at the time and in 1986 with 114,464 seats) and is the most frequent venue for World Cup games with 19 games. Michael Jackson filled it with 100,000 spectators five times in a row during concert appearances in 1993. 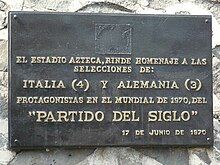 The semi-finals between Italy and Germany also took place in the Aztec Stadium. 107,000 spectators saw one of the biggest games in the history of the football World Cup. Italy took the lead after seven minutes through Roberto Boninsegna and wanted to defend their lead using the tried and tested catenaccio tactic, but the Germans struck England in the last minute, as they had in the final four years earlier. Karl-Heinz Schnellinger , active as a club player at AC Milan , scored the 1-1 after the German team had climbed the Italian goal for 80 minutes and missed numerous great chances. An extension had to bring the decision. The later top scorer of this World Cup, Gerd Müller , put Germany in the lead in the 95th minute, but Tarcisio Burgnich was able to equalize just four minutes later. In the 104th minute, Luigi Riva gave the Italians a 3-2 lead, which was destroyed by another goal from Müller in the 110th minute. Gianni Rivera ended this incredible extra time with a 4: 3 in the 111th minute. That put Italy in the final against Brazil , but what people remember most was the semi-final between Italy and Germany. Today it is known as the “ Century Game ”, although the German press had already described the quarter-finals against old rivals England, won 3-2 after extra time after 0-2 deficit, as the game of the century.

The final between Brazil and Italy turned out to be a one-sided game from the start. The Italians, who were still tired from the difficult semi-final match against Germany, fell behind after 19 minutes with a goal from Pelé . But they got up and scored the 1-1 with Boninsegna, who had already scored in the semifinals. So it was at the break, before the South Americans really turned up in the second half. First Gérson in the 65th minute, then Jairzinho after 70 minutes and captain Carlos Alberto Torres four minutes before the end made the 4-1 final score perfect. Brazil were world champions for the third time, Italy second. In the game for 3rd place the day before, also in Azteca, Germany, Uruguay had defeated 1-0.

At the place where the German national team had failed to Italy 16 years earlier , the 1986 World Cup should, despite all efforts, come to an end in the Aztec Stadium. Although Karl-Heinz Rummenigge and Rudi Völler were able to compensate for a 2-0 deficit in the final phase of the final against Argentina, the German team conceded the goal to make the final score 2-3 in the 84th minute.

The English have no less bad memories of the Mexican venue where they ended in the quarter-finals after Diego Maradona scored an irregular goal with the hand of God . That Skandaltor to 1: 0 (Result 2: 1) the English have never forgiven the former football star. Diego Maradona's second goal in that game was later named Goal of the Century by FIFA .

A total of 1,917,550 spectators in the Aztec Stadium saw the 19 games (100,924 on average per game). In no World Cup stadium were there more spectators and in none a higher average. 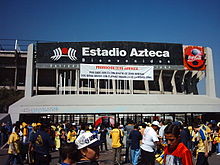 Today the stadium is mainly used by Club América, whose supporters fill the stadium with an average of around 65,000 people during the championship games. On July 27, 2003, the final of the CONCACAF Gold Cup (the North and Central American championship, comparable to the European Football Championship, etc.) took place in the Aztec Stadium , which the Mexicans won 1-0 against Brazil in extra time.

Occasionally the stadium is used for other mass events such as religious gatherings. On January 25, 1999, Pope John Paul II was visiting the Aztec Stadium during a pastoral trip to America and gave a speech. In the same year, more than 100,000 people gathered there for a solemn hour of prayer to honor Jesus . Concerts like those of the Mexican rock singer Benjamin Anaya (2003), on the other hand, are rather rare at this location. In 2004 the stadium was the setting for the film Matando Cabos .

On October 2, 2005, the first regular game of the National Football League (NFL) outside the United States took place in the Aztec Stadium with the American football game between the Arizona Cardinals and the San Francisco 49ers . The game called Fútbol Americano ended with 31:14 for the Cardinals , who moved a home game. The crowd of 103,467 is the largest crowd at a season game of the NFL outside of the United States to date. A game of the preseason of the NFL in 1994 between the Houston Oilers and the Dallas Cowboys (6-0) even gathered 112,376 spectators in the wide circle. On February 20, 1993, the WBO semi-welterweight World Cup boxing match between the Mexican Julio César Chavez and the American Greg Haugen attracted about 130,000 spectators to the football arena.

The Aztec Stadium underwent extensive renovations from 2016. It was the largest construction work since the stadium was roofed in 1967. The first step in the project was to replace the seating in the stands, which initially reduced the available space from 105,000 to 95,500. Further modifications to the grandstands then reduced the capacity to around 87,000.

From the beginning of February 2016, the lower standing section of the east stand became a large hospitality area. The second phase began at the end of March 2016 when the western upper tier was converted into a press area in accordance with the requirements of FIFA and the NFL . The stadium also received private boxes .

To the west of the stadium, construction began on a complex called Foro Azteca with 130,000 square meters of retail space , an office building of 20,000 square meters and two hotels . The creation of 2,500 additional parking spaces is also planned. The shopping center next to the stadium should be completed by 2019 ..

Competition venues for the 1968 Summer Olympics