Olimpijskyj is a redirect to this article. For the stadium in Donetsk see RSK Olimpijskyj .

The stadium began in 1914 when the first plans for an event location were made. This project was not implemented for the time being because of the First World War . On August 12, 1923, the " Leon Trotsky Red Stadium " was opened. Due to construction errors, it was decided to build a new stadium, for which construction work began in 1936 on the site of the old sports facility. The 50,000-seat complex designed by Mykhailo Hrechyna was scheduled to open on June 22, 1941. This was prevented by the German-Soviet War , which began on the same day. The stadium opened in 1948, seven years late.

From 1966 to 1968 the sports facility was expanded to include a second grandstand to 100,000 seats and tennis, volleyball, handball and soccer fields were created. There was even a ski jumping hill in the sports complex for training purposes . This was dilapidated in the 1990s and demolished in 2004. The stadium was modernized for the soccer tournament of the 1980 Summer Olympics in Moscow. In 1997, a further refurbishment of the facility began in accordance with FIFA guidelines, including renewing the athletics facility and replacing the benches in the stands with individual plastic seats. This reduced the stadium's capacity to around 83,000 seats.

Before the renovation for the 2012 European Football Championship, the sports facility was mostly used for football. This is how the Ukrainian national soccer team received their opponents in the Kiev Olympic Stadium. From 1992 to 2007 and from 2012 the Ukrainian cup final takes place there every year. The Dynamo Kiev soccer team moved from the Valery Lobanovsky Stadium with around 16,000 seats to the large arena for games with great public interest such as Champions League games . Arsenal Kiev's footballers also used the stadium.

On December 5, 2011, Dynamo Kiev signed a five-year contract with the operators of the Olimpijskyj for the use of the renovated arena. Dynamo will play its national and international competitive games in the country's largest stadium until at least 2016. During the Soviet era , Dynamo celebrated in the Olympic Stadium a. a. 13 championship titles and two successes in the European Cup Winners' Cup (1975, 1986).

After being awarded to Ukraine in 2006, the stadium was intended as the final venue for the 2012 European Football Championship . However, when UEFA complained about the stadium in 2008, the architects' office von Gerkan, Marg and Partner was awarded the contract for the complete renovation in December 2008. According to the plans, the new stadium, which is located in the center of Kiev, was given a complete roofing over the grandstands with an integrated floodlight system . There are 70,050 seats available for visitors to football matches. Due to the increased demand for journalists and reporters, only 65,720 seats will be made available to viewers for EM 2012. The filigree upper tier of the stadium from 1967 was to be retained, so a roof structure detached from the grandstand was necessary. The membrane roof consists of 80 individual areas of around 600 m² each. These are carried by a cable structure based on the storage wheel principle. The area of ​​50,000 m² of a PTFE-coated glass fabric is supported with its 80 axes by 800 tons of rope and 200 tons of cast parts. The individual segments were cut to size in Thailand and assembled on site ready for installation. 640 ETFE light domes with diameters of 2.5 to 3.2 meters provide the lighting . The covering with 44,500 m² of transparent ETFE film and the 6,500 m² with these light points results in a "translucent roof landscape", with the high points enabling the membrane support and the roof drainage.

A total of three quarters of the old stadium were replaced. A team of 60 Ukrainian and 40 German engineers fulfilled the requirements of the client, the city of Kiev. In addition to the highly qualified engineers, difficulties and reworking resulted from the lack of qualifications of the construction workers. In 2009, construction began on a three-story shopping center in front of the stadium, where space should remain for visitors to the stadium. It was only after pressure from UEFA that the city planners waived this. Nevertheless, there is now a 12-story residential building at the stadium, which was planned with four floors. The completion of the most important renovation work was planned for autumn 2011 and it should be playable by November of that year at the latest. The building handover took place in August 2011, on October 8, 2011 the venue was officially inaugurated eight months before Euro 2012. The entire renovation project resulted in costs of over 585 million euros. On November 11, 2011, the national soccer teams of Ukraine and Germany played the first international match after the reopening, which ended 3: 3. 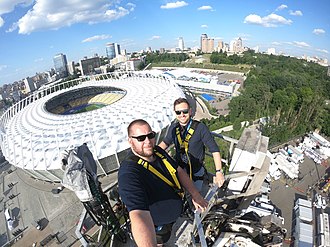 The Olympiastadion (2018) from a bird's eye view with photo reporters.

During the European Championship, a total of five games were played in Kiev with three preliminary round matches, a quarter-final match and the final.

Stadiums of the Ukrainian Premjer-Liha in the 2019/20 season

Due to the conflict in eastern Ukraine , the clubs Shakhtar Donetsk, Olimpik Donetsk and Zorya Luhansk are moving to foreign stadiums.

Competition venues for the 1980 Summer Olympics