The 2005/06 UEFA Champions League was the 14th season of the most important European competition for club teams in football under this name and the 51st overall. 73 clubs from 49 national associations took part in the competition this year. The season began on July 12, 2005 with the first leg of the first qualifying round and ended on May 17, 2006 with the final at the Stade de France in Saint-Denis near Paris, which FC Barcelona won 2-1 against Arsenal .

There were no changes to the game mode compared to the previous season. In the group stage, as before, if two teams were tied, the following applies:

Since defending champion Liverpool FC was fifth in the English Premier League and did not qualify for the Champions League, and the English FA refused to withdraw the CL start right from fourth Everton in favor of Liverpool, UEFA decreed an exception with Liverpool FC was also allowed to compete in qualifying round 1 to get the opportunity to defend the title. Thus, for the first time in the history of the Champions League, a nation provided a total of five participants. It was not until the 2015/16 UEFA Champions League that there were again five participants from a nation, after the winners of the UEFA Europa League, Sevilla FC, were allowed to take part in the competition for the first time alongside the four teams qualified via the Primera División .

The same situation had already happened in Spain six years earlier: Real Madrid won the Champions League, only came fifth in the Spanish league, and should therefore only have played in the UEFA Cup. The Spanish association RFEF , however, withdrew the CL start right from fourth in the table, Real Saragossa, clearing the way for Real Madrid to take the place of the defending champions in the Champions League. Zaragoza, on the other hand, had to make do with the UEFA Cup.

Since the statutes already provided for no more than four participants per nation in the Champions League, Liverpool FC was not called an English but a "European" club, which means that two teams from one nation do not meet before the round of 16 should, was canceled. Nevertheless, the game results were included in the five-year rating for England. Liverpool FC was promptly drawn into a group with league rivals Chelsea FC at the group draw, both comparisons ended goalless.

This exception rule was not free from controversy. Both the fact that England now had five teams in the top European league and the decision to let Liverpool play through the qualification, one saw a distortion of competition. The qualifying opponents of the English had no chance against the strong defending champion, whereas normally one would have had more equal opponents and thus more the opportunity to qualify for the next rounds. For the following period, UEFA clarified its regulations so that a defending champion is always seeded for the main round, regardless of how he performs in his league.

Defending champions Liverpool FC and 23 other champions of the European leagues, who were placed under 27th in the 2004 UEFA ranking , were drawn here and played one home and one away game against each other. The respective winners advanced to the second qualifying round.

The 16 winners of the third qualifying round were drawn together with the champions of the ten highest-ranking national associations and the second-placed clubs from the countries 1 to 6 in the UEFA five-year ranking in eight groups of four teams each. In each group, the first and second-placed teams advance to the round of 16, while the third-placed teams continued to play in the round of 32 of the 2005/06 UEFA Cup . The last group dropped out of the European competitions. 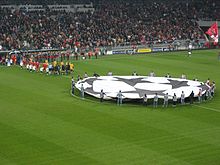