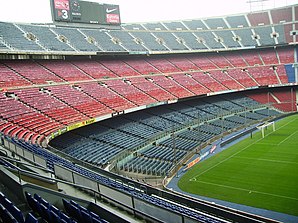 The Camp Nou in Barcelona

The 1998/99 UEFA Champions League was the 7th season of the most important European competition for club teams in football under this name and the 44th overall and was won by Manchester United against Bayern Munich. Manchester United was the fourth team in Europe to win the triple . The Camp Nou in Barcelona hosted the final on May 26, 1999.

A record number of 56 teams from 47 national associations took part in the competition, with the countries that were ranked 1 - 8 in the UEFA five-year rankings each being allowed to send their runner-up as a second representative. After a long break, Albania had its champions back at the start.

There were no changes compared to the previous season. As usual, the champions from the countries ranked 1 - 7 in the UEFA five-year ranking (Germany, England, France, Italy, the Netherlands, Portugal and Spain) were seeded for the group stage. Greece, this time 8th in this ranking, also had to send their champions Olympiacos Piraeus into the second qualifying round, as defending champion Real Madrid was also set for the group stage as the third representative of Spain. The six group winners and the two group runners-up with the best points then each reached the quarter-finals.

The Bayern Munich went through a free kick from Mario Basler early lead in the 6th minute. The German representative was able to control the game to a large extent in the following period and had several opportunities to expand the lead; Carsten Jancker, for example, only hit the crossbar with an overhead kick from five meters. However, Manchester United managed in stoppage time to turn the game sensationally with two goals from Teddy Sheringham and Ole Gunnar Solskjær . Both hits came from left corners brought in by David Beckham .