The Camp Nou [ came nɔu̯ ] ( Catalan for new field ), also Nou Camp , is a pure football stadium in the Spanish metropolis of Barcelona , Catalonia . It was inaugurated in 1957 and has since been used as the home stadium by FC Barcelona , which previously played at Camp de Les Corts . The venue is classified by UEFA in stadium category 4 and, with a capacity of 99,354 spectators, is the largest pure football stadium in the world and the largest football stadium in Europe . The stadium was opened during the Franco dictatorship under the Spanish name Estadio del Club de Fútbol Barcelona - from 1973 in Catalan Estadi del Futbol Club Barcelona - but has always been known as Camp Nou , as it has been officially called since 2001.

The Spanish league titles of 1948 and 1949 and the commitment of László Kubala prompted the club's management to plan the construction of a new stadium. The capacity of the old stadium, Les Corts , was no longer large enough with 60,000 seats. After more than three years of construction, Camp Nou was officially opened on September 24, 1957. The opening ceremony began with a mass in which George Frideric Handel's Hallelujah was sung in the choir. The stadium was blessed in the name of Saint Mary of Montserrat and the stadium was opened with a game between FC Barcelona and the Polish top club Legia Warsaw . Around 90,000 fans saw the Catalans win 4-2. On the occasion of the stadium opening, the Catalan poet Josep Maria de Sagarra wrote a sonnet called “Blau Grana”, from which Josep Badia and Adolf Cabané composed a stadium anthem. During the opening day performance, 10,000 pigeons were released and 1,800 fans formed a circle to dance the Catalan national dance Sardana . At that time the stadium was also financed by the fan clubs, the so-called " Penyes ". As early as the 1940s, former FC Barcelona players and supporters were organizing these groups, and as the cost of the Nou Camp stadium continued to rise, the Penyes helped fund it.

On the occasion of the soccer world championship held in Spain in 1982 , it was expanded again by an upper tier in 1980 and held 119,000 spectators at that time. However, UEFA safety regulations have reduced the capacity to the current official capacity. In 1994 the lower ranks were expanded.

In addition to the 1982 World Cup, Camp Nou was also the venue for the 1999 Champions League final , in which Manchester United defeated Bayern Munich 2-1 with two goals in stoppage time.

As FC Barcelona reported on its website on September 18, 2007, the Camp Nou is to be rebuilt according to plans by the British star architect Norman Foster . The modernization of the arena, which was built in 1957, includes all-round roofing and an increase in capacity from 99,000 to 105,000 spectators and is expected to cost around 600 million euros. The stadium comfort is to be increased and the overall picture beautified. The project has been on hold since 2010 due to the high costs. Club President Sandro Rosell , who included the renovation of the Camp Nou in his election manifesto, declared in December 2010 that the renovation of the Palau Blaugrana sports arena would initially have priority. The project was resumed in January 2014. The renovation work should start in summer 2020 and be completed in 2024.

The plan was to name the stadium after the club's founder, Joan Gamper . However, since he was a supporter of Catalanism , the name was banned by the Franco dictatorship . When it opened in 1957, the club therefore chose the descriptive name “Estadio del Club de Fútbol Barcelona” (Spanish for CF Barcelona stadium ). In the language of the Catalans , however, the Catalan name "Camp Nou" ( new field ) established itself , as the stadium had replaced the Camp de Les Corts as a venue. However, the Catalan language was suppressed and forbidden by the regime. Catalan terms, place names, or even personal names have been Hispanized . In 1941, FC Barcelona had to change its Catalan suffix “Futbol Club” (FC) to the Spanish variant “Club de Fútbol” (CF) and stadiums with the name “Estadi” were renamed “Estadio”.

In 1965, the then Barça President Enric Llaudet let the members vote on the official name - during the dictatorship - with the following result:

Despite the election, the stadium continued to be called "Camp Nou". After the club was allowed to use the Catalan addition "Futbol Club" (FC) again from November 8, 1973, the official name of the stadium was also changed to the Catalan version "Estadi del Futbol Club Barcelona".

In July 2001, under President Joan Gaspart , the official name was voted again. This time the club members voted with 68.25 percent for "Camp Nou", whereupon the stadium officially adopted this name.

In April 2020, during the COVID-19 pandemic, FC Barcelona gave up the stadium's naming rights to its own foundation . The foundation aims to find a name sponsor for the 2020/21 season in order to use the proceeds to support research projects against the virus infection COVID-19 worldwide . 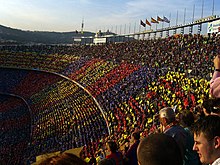 Near the Camp Nou was the Mini Estadi , which was demolished in 2019 and was built in 1982 and served as the home stadium for the reserve team until the Estadi was built by Johan Cruyff . The area also includes a ball game hall, the Palau Blaugrana , for the basketball , handball , futsal and roller hockey sections , as well as an ice rink.

The so-called La Masia , an 18th century farmhouse, is right next to the stadium. Between 1979 and 2011 it hosted the FC Barcelona's youth academy.

The FC Barcelona Museum is integrated in the stadium . The museum is visited by over 1.2 million visitors annually. There is also a Catholic chapel in the stadium , in which the players can pray in front of a black Madonna on match days.

To get a season ticket for Camp Nou, you have to be a member of the association and put on a waiting list. FC Barcelona has over 170,000 paying members, 9,500 of which were on this list in October 2010. Since approx. 225 places become free every year, the estimated waiting time is 42 years.

The stadium can be visited. The stadium tour, the so-called "Camp Nou Experience", begins in the club museum and then leads through different areas of the stadium.

Barcelona's ultras, the Boixos Nois (' Boxwood Boys'), have been officially banned from the stadium since 2003.

On November 17, 1982 Pope John Paul II visited the Camp Nou and preached to 120,000 believers. He was offered a membership in FC Barcelona.

Stadiums of the Spanish Primera División in the 2019/20 season

Competition venues for the 1992 Summer Olympics