The Müggelberge (formerly also called Müggelsberge ) are a wooded range of hills with heights of up to 114.7  m above sea level. NHN in the southeast of Berlin in the Treptow-Köpenick district . They are dominated by the Kleiner Müggelberg (88.3 m) and the Großer Müggelberg (114.7 m). The Müggelberge cover an area of ​​around seven square kilometers. The ridge was created in the Ice Age .

View from the Großer Müggelberg to the Müggelsee

The Müggelberge, like all of Berlin and Brandenburg , were formed by the glaciers advancing from Scandinavia during the Ice Age. They therefore mostly consist of meltwater sand and occasional marl boulder . The Müggelberge are made up of deposits from the penultimate Saale and the most recent Vistula ice age. The deposits that make up the Müggelberg Mountains were in some cases intensely disturbed ( compressed ) by the pressure of the ice . Nevertheless, the Müggelberge cannot be called terminal moraine , as they are completely isolated like an island in the Berlin glacial valley and have no sand . The Müggelberg Mountains in their current form were probably formed when the youngest inland ice advances and not when it melted back.

Summit cross on the Great Müggelberg

The Great Müggelberg is the highest natural elevation in Berlin. The first height measurement was carried out in September 1846 by Johann Jacob Baeyer . Using trigonometric leveling, he determined a height of 58.748 in the Toise du Pérou unit he used above the Swinoujscie level (mean level in the Baltic Sea near Swinoujscie ); this corresponds to 114.51 meters. In 1901 the height was measured at 114.7 meters above sea ​​level . In the GDR the height was given as 115.4 meters, although it is not known when this measurement was made and which reference system it was based on. In 2006, the Treptow-Köpenick surveying office carried out a new survey and determined a height of 114.7 meters above sea ​​level , the reference height that has been applicable in Germany since 2000.

The stump of the unfinished Müggelberge television tower and a mast for broadcasting purposes are located on the Großer Müggelberg . 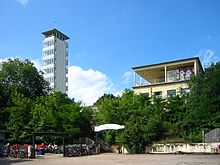 On the Kleiner Müggelberg there is the Müggelturm observation tower (panoramic view of up to 50 kilometers) and the building of a restaurant that used to be well frequented.

Baeyer determined in 1846 a height of 47.202 Toises or 92.00 meters for the highest point. The height of the Kleiner Müggelberg officially stated today is 88.3  m above sea level. NHN .

The sand chute in the Cannon Mountains

As a cannon mountains a maximum of 70.1  m above sea level. NHN high elevation, originally called Kleiner Müggelberg , in the northwestern foothills of the Müggelberg. In 1884 a building contractor was given permission to mine sand there as building material for Berlin. This permit expired on his death in 1902 and was not renewed for the heirs. From this time on the name cannon mountains appeared for the first time . During sand mining, this area was known as a sand chute . The sand was transported by cable car to the bank of the Dahme and loaded into barges, where the restaurant “ Schmetterlinghorst” is today. During the First World War , the AEG and the military shot steel cartridges from their armaments production in the remaining sand pit, which was around 250 meters long and almost 80 meters wide . This great noise, which could be heard as far as Köpenick , subsequently led the population to believe that this was the reason for the naming. However, this refers to artillery exercises in the 18th century in this area. In the period after 1939, the sand chute is said to have been used again as a training and testing area. In the meantime, in the 1930s, it was transformed into a hiking and recreational area. After 1945 there was no more shooting in the cannon mountains, but the name was retained.

The hole in the sand chute is still there today and is less than 300 meters from the road to the Müggelturm. The slopes are now densely overgrown with trees, the area is largely tree-free. A few camp fires are visible there and drive on the slopes downhill - mountain bikers over jumps .

On the mountain west above the sand chute, a viewing platform was built in the 1930s, which was overgrown by plants from 1990 onwards. It was uncovered and repaired in 2006.

The man-made toboggan run in the Müggelberg Mountains was called the death run. It led from the ridge between the large and small Müggelberg to the foot of the Teufelssee and is crossed in the middle by a wooden bridge. Since there are only a few large elevations in the Berlin area, the Death Railway was a popular toboggan meeting point in the Müggelberge recreation area. The railway was closed in 1992. Today it is the official driving area of ​​a Köpenick downhill club and a popular meeting place for young people from the scene.

The Bismarckwarte 1905 shortly after it was built

On October 16, 1904, the 40-meter-high Bismarckwarte was inaugurated on the Großer Müggelberg by the Bismarck-Warte zu Cöpenick eV association founded on January 25, 1900 . The architect was Otto Rietz from Schöneberg . The foundation stone was laid on May 23, 1903 and the total construction costs were 120,000  marks (adjusted for purchasing power in today's currency: around 813,000 euros). The tower and the sculptures were made of Rüdersdorfer limestone with brick backing.

The viewing platform at a height of 29 meters could be reached via two opposite entrances on the sides of the tower via two stairs with 166 steps each. A spiral staircase, not open to the public, led from the viewing platform to the top of the control room, on which a fire bowl was attached. A special system was used to generate a flame up to 18 meters high. During the entire 1936 Summer Olympics , a fire brought to the Müggelberge by Berlin schoolchildren burned in the fire bowl.

Shortly before the end of the Second World War , the Bismarckwarte was blown up on April 22, 1945 by a German Volkssturm unit in order not to give the advancing Soviet troops any visible points for orientation when marching on Berlin. Today the remains of the tower lie on the northern slope of the mountain.

Today the unfinished Müggelberge TV tower is located on the site .

In Wilhelm Grothes version of the Schildhornsage , the conversion of the Slav prince Jaxa von Köpenick took place in the Müggelberg Mountains in 1157, the year the Mark Brandenburg was founded , after Jaxa had been able to save himself from Albrecht the Bear with God's help while fleeing through the Havel . The popular versions of the folk tale name the Schildhorn as the place of Jaxa's conversion. Even Theodor Fontane in his describes walking tour through Mark Brandenburg from 1880, the Müggelsberge with epic power: "They are there like the hull of a fabulous aquatic animal, which remained here in marshy depth than the great floods of the past ran".

“ Müggelberge , in the Teltowschen Kreis, 1 ⁄ 2  mile east of Koepenick, located on the lake of the same name, and washed south by the Wendish Spree, are the highest heights near Berlin, 350  feet high, form a chain of wooded heights, which allow a surprising view of the area and are therefore worth a visit from every stranger. "

Highest mountains in the German states

See also : List of the highest mountains in the German federal states  and List of mountains and ridges in Germany