This article deals with the King Baudouin Stadium in Belgium, for the Stade Roi Baudouin in the Congo, which bears the same name from 1952 to 1967, see Stade Tata Raphaël .

The King Baudouin Stadium ( French Stade Roi-Baudouin ; Dutch Koning Boudewijnstadion ) is a football stadium with an athletics facility in the Belgian capital, Brussels . It was called Heysel Stadium until 1995 and was converted into a multifunctional arena in the mid-1990s. The largest stadium in Belgium with around 50,000 seats was one of the eight venues of the European Football Championship 2000 until the semi -finals . The Memorial Van Damme , one of the most renowned athletics meetings in the world and part of the IAAF Diamond League series , has also been held here since 1977 .

History of construction and use 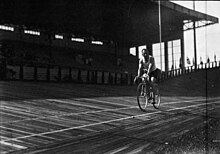 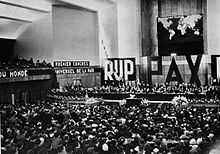 In 1936 a universal peace congress was held in the Heysel Stadium.

A world exhibition was planned on the Heysel Plateau for the centenary of Belgium's independence , but it did not take place until 1935 due to the global economic crisis . As part of the planning, the city ​​of Brussels decided in 1927 to also build a universally usable stadium, and Mayor Adolphe Max laid the foundation stone for it on October 4, 1929. The stadium was built on the western edge of the Heysel plateau just north of the former Ossegem / Osseghem pond . The architect was Joseph van Neck, who also planned the exhibition palace. In less than a year, over 600 workers had worked day and night to build the stadium. Initially it had 75,000 seats, including 9,000 seats on a grandstand.

The first competition was held from August 24th to 30th, 1930 in this Stade du Centenaire / Eeuwfeest stadium, a world championship for track cyclists . The official inauguration took place on September 14, 1930 by Prince Leopold, the future King Leopold III. , as part of an international soccer match , then called "Interland", which Belgium won 4-1 against the Netherlands .

The Heysel Stadium developed into a legendary sports facility with many international soccer matches in the following decades. First and foremost, it was a home for the Belgian national football team . From 1958 to 1985, however, it was also the venue for the finals for the European Championships and Cup winners seven times . If you add in the replay that became necessary in 1974, in which FC Bayern Munich finally beat Atlético Madrid 4-0 (two days earlier 1: 1) , there were even eight games.

In 1972 the Kingdom of Belgium hosted the European Football Championship and Brussels hosted the final between Germany and the Soviet Union . In front of around 43,000 spectators, the DFB-Elf secured their first European championship title in the Heysel Stadium - two years before they won the World Cup in their own country.

On May 29, 1985, the Heysel Stadium was struck by a disaster. Immediately before the start of the European Cup final between Juventus Turin and Liverpool FC , there was a confrontation between drunken British hooligans and Italian supporters in Block Z. There should have been “neutral” Belgian spectators. Finally, the English thugs stormed the block, which was mostly occupied by Italians, triggering a mass panic in which numerous people were trampled to death and crushed on the fences and walls. One of the walls of the now dilapidated Heysel Stadium collapsed under this pressure. During the entire event, the Belgian security forces were overwhelmed because they had not provided enough police officers.

The game between the two teams, which was kicked off despite the events - also for safety reasons - ended 1-0 for Juventus Turin with a penalty converted by Michel Platini after a foul on Zbigniew Boniek . Platini later commented on the game with the words: "When the tightrope walker falls in the circus, the hour of the clowns strikes" . The television broadcast planned on ZDF was canceled before the game started. Reporter Eberhard Figgemeier commented on the riots (still broadcast live).

In the end, 39 people were dead and over 400, some seriously injured. English clubs were subsequently banned from international cup competitions for five years, and Liverpool FC was not allowed to play internationally for six years. Dozens of hooligans and, among other things, a number of officials, some years later, were tried and convicted, including a corrupt official. He had not sold tickets for Block Z to neutral viewers, but to Italian travel agencies.

The stadium was used as an athletics arena for the Van Damme Memorial for a few years before it was fundamentally rebuilt in 1994. To commemorate May 29, 1985, a memorial site was inaugurated on the site of the event on the twentieth anniversary: ​​a sixty-square-meter sundial that includes the names of the 39 dead from that time. 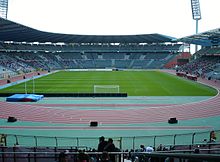 The King Baudouin Stadium was officially inaugurated on 23 August 1995 with a friendly between Belgium and Germany (1: 2) and named after King Baudouin, who had died two years earlier . Contrary to the current trend, the completely redesigned stadium was again provided with an athletics track and is therefore not a pure football stadium.

In 1996 the stadium hosted a European Cup final for the first time since the disaster. In the final of the European Cup Winners' Cup , the French capital club Paris Saint-Germain defeated the Austrian representative Rapid Wien 1-0.

In 2000 Belgium hosted the European Football Championship together with the Netherlands ; All three Belgian group games - including the opening game against Sweden - were played in the King Baudouin Stadium, a quarter-final and a semi-final. The stadium no longer meets the very highest requirements of UEFA.

On March 19, 2019, the Royal Belgian Football Association presented plans for the renovation and modernization of the national stadium. The partner will be the sports organizer Golazo. After the construction of the Euro Stadium for the 2021 European Football Championship failed, 150 to 200 million euros will be invested in the King Baudouin Stadium . The athletics facility for the Van Damme Memorial will be retained. The available space will be reduced from currently around 50,000 to 40,000. From 2022, the Belgian national football team should be able to compete in their converted home stadium again. With the redesign, the name of the event arena will also change. After the reopening, it will be named Golden Generation Arena .

At the end of September 2019, the Brussels City Council announced that there would be no major changes to the national stadium for at least a year. Only minor work on the parking lots, changing rooms, press and security facilities as well as the logistics areas and emergency exits for 1.5 million euros should be done. At the end of November that year, Jean-Luc Crucke, Regional Minister for Sports Infrastructure, brought the municipality of Tubize into play as a new location for a stadium. Tubize is located about 25 km south of the capital. The Brussels airports Charleroi and Zaventem are in the vicinity . Several highways run around the city on the border of Dutch- speaking Wallonia and French Flanders, and there is an area of ​​several hectares that would be suitable for construction. The headquarters of the Belgian Football Association and the training center for the national team are already in Tubize. Accordingly, the construction of the national stadium would also make sense in this regard. Crucke told the newspaper La Dernière Heure that the subject had to be brought to an end. The current stadium with athletics facility no longer meets the modern requirements of football.