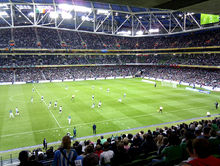 The 2010/11 UEFA Europa League was the 40th edition of the second most important competition for European football clubs , which was held under the name of the UEFA Cup until the 2008/09 season. 194 clubs from all 53 national associations of UEFA participated in the competition this season.

The season began with the first leg of the first qualifying round on July 1, 2010 and ended with the final on May 18, 2011 at the Aviva Stadium in Dublin (because of the sponsor name for the Dublin Arena final ), which FC Porto won 1-0 Falcao's goal against Sporting Braga won.

The top scorer of the competition was the Colombian Falcao from the winners FC Porto with the European Cup season record of 17 goals.

With this victory, FC Porto qualified for the 2011 UEFA Super Cup .

The participants qualified through the national championships and cup competitions of the UEFA member associations. Only the previous year's title holder was automatically eligible to start in the main competition, provided that he did not compete in the higher-quality Champions League. All other participants were determined through the qualifying rounds, or entered the competition as losers in the Champions League qualification. Three qualifying rounds took place between early July and early August 2010. The fourth and final qualifying round was called the “play-off round” for better marketing. These games took place at the end of August 2010. When a team went into qualification depended on the club's position in the national championship and the position of the home association in the 2009 UEFA five-year ranking . In each qualifying round, the participants were divided into seeded and un seeded clubs based on their club coefficient (KK); purely national pairings were excluded.

In the subsequent group stage, 48 teams were divided into four pots based on the club coefficient, and then divided into twelve groups of four teams each using a lottery procedure. As in the UEFA Champions League, each group played a full series of home and away games, so the group stage comprised six match days.

The first and second in the group stage reached the final rounds, third and fourth placed teams were eliminated. These 24 teams were joined by the eight third-placed teams from the group stage of the UEFA Champions League. Thus 32 teams reached the knockout phase , in which the opponents were drawn separately for each round, who competed against each other in the two-legged game until the two finalists were determined. Two representatives of one nation were allowed to meet at the earliest in the round of 16. The final was decided in a single game in May 2011 at the Aviva Stadium in Dublin.

In the competition it was possible that, according to the framework schedule and the draw, two games should take place at the same time and location. For security and economic considerations, in such cases, in consultation with the clubs involved, the home rights were swapped, or a different game date was switched to.

There was a small change compared to the previous year. The special rules for Andorra and San Marino have been dropped and the field of participants has been expanded by two places. From now on, the cup winners of the nations started on ranks 52 and 53 in round Q1, regardless of which nation it was. In addition, the runners-up in the last two ranks were allowed to take part for the first time. The runners-up in ranks 33 and 34 fell back from round Q2 and round Q1, so that 54 teams competed in round Q1 if there were no substitutes. Since defending champions Atlético Madrid had also qualified as a national cup finalist, the cup winners from Malta and San Marino advanced to the second qualifying round, and the Finnish cup winner to the third qualifying round.

For the group draw, the 48 participants were divided into four pots of twelve teams each according to their club coefficients. Pot one contained the defending champion and the eleven teams with the highest coefficients, pot four the twelve weakest representatives. No two teams from one nation were drawn into one group, as purely national matches are only allowed from the round of 16.

If two or more teams are tied, the placement will be determined according to the following criteria:

Falcao has escaped Tanju Kayhan and scores with his third goal to make it 1: 3. Goalkeepers Raimund Hedl and Mario Sonnleitner are too late.

The first and second in the group stage progressed, third and fourth placed teams were eliminated. The eight third-placed teams from the group stage of the UEFA Champions League joined these 24 teams . These were Spartak Moscow , Sporting Braga , Ajax Amsterdam , FC Twente Enschede , Rubin Kazan , FC Basel , Glasgow Rangers and Benfica Lisbon . Thus 32 teams reached the knockout phase. The twelve group winners as well as the four best group thirds from the Champions League were set for the sixteenth-finals, with the group first and second in a group not meeting again. In addition, two representatives of a national association were allowed to meet in the round of 16 at the earliest. The draw took place in Nyon on December 17, 2010, and the game was played on February 17 and 24, 2011.

Below are the top scorers of the Europa League season (without qualification). The sorting was carried out in the same way as the UEFA goalscorer list according to the number of goals and, if the number of hits was the same, based on the game minutes.