This article deals with the former Düsseldorf Rheinstadion, for the stadium of the same name in Kehl, Baden-Württemberg, see Rheinstadion (Kehl) .

The Rheinstadion was a football stadium with an athletics facility in the Stockum district of the North Rhine-Westphalian state capital Düsseldorf . The main users were the football club Fortuna Düsseldorf and from 1995 also the American football team of the Rhein Fire . The facility directly on the Rhine was demolished in 2002 and replaced by a stadium with a roof that can be closed, which is now called the Merkur Spiel-Arena . The arena sports park encompasses the entire area of ​​the former Rheinstadion area that can be used for sports.

Play media file
Dutch film footage of the friendly match between the Federal Republic of Germany and the Netherlands on March 14, 1956 in the old Rheinstadion

The planning for the construction of a large sports venue in the north of Düsseldorf began before the First World War . At that time, the Berlin architect Johannes Seiffert delivered a design in the form of a horseshoe with an attached swimming pool. However, it was not until the 1920s that the plans, now drawn up by the Düsseldorf city planning officer Hans Freese , were implemented. The total cost was 1,240,000 Reichsmarks . The stadium was surrounded by an ensemble of other sports facilities, including a swimming stadium and a cycling track . The operational and sanitary facilities, the routing and the transport connections were considered exemplary at the time. The architectural harmony of the combination of stadium and swimming pool and the successful embedding of the facilities in the Lower Rhine landscape were also praised. A stadium with 42,500 seats was created.

The entire area was put into operation in 1925. In September of this year, President Paul von Hindenburg visited the Rhineland, which had been liberated a month earlier, and gave a patriotic speech in front of 50,000 listeners in the Rheinstadion on the occasion of the end of the French occupation . These celebrations for the "thousand years that the Rhineland belonged to the German Empire" can be seen as the unofficial inauguration of the Rheinstadion. The soccer match between Germany and the Netherlands on April 18, 1926 is considered the official opening of the Rheinstadion. Due to the large number of spectators, the situation in front of and in the stadium was chaotic. The German national team won 4-2 in front of an estimated 60,000 spectators in the crowded stadium. In a friendly game on March 14, 1956, the Dutch national team was able to return the favor with a 1: 2 win at the Rheinstadion.

In 1974 the Rheinstadion was one of the nine venues for the soccer World Cup in Germany. On the occasion of the World Cup, the stadium was extensively rebuilt and modernized between 1968 and 1975 for 46.3 million DM. The audience capacity has been expanded from 40,000 to 68,400.

The design for the new stadium came from Friedrich Tamms and Erwin Beyer.

The highlights of the stadium, which was basically completely rebuilt, were the modern floodlights with its four 48-meter-high masts and the lawn , which thanks to an effective drainage system remained easy to play on even when it rained. The exterior was shaped by the 62 angled trusses.

For the first athletics World Cup in 1977, the athletics surfaces were redesigned and provided with plastic sheeting . In addition, an athletics hall was built on the north-western edge of the stadium for around eleven million Deutschmarks.

As a result of various conversions, primarily converting standing room into seating, the capacity fell to 55,850 seats.

The decision about the future

In the course of Germany's application for the 2006 World Cup , the city planned to apply to the DFB as a venue. For this purpose, conversion plans were drawn up for the Rheinstadion. These provided for the closure of the south stand, which was open to the lower tier, and the roof. In addition, the roof inside the stadium should be expanded to make a larger number of seats rainproof.

After the bid for Germany, Düsseldorf then changed strategy in the internal application phase in Germany for the location as a World Cup stadium. This happened even though there had already been a study for a multifunctional arena , which the Düsseldorf Mayor Joachim Erwin described as not feasible.

After an architectural competition, the city of Düsseldorf decided to design a very large multi-purpose hall and prepared to demolish the Rheinstadion. 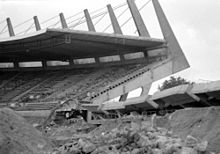 The last football game in the Rheinstadion was on March 3, 2002 the game between Fortuna Düsseldorf and Rot-Weiss Essen , in which Ganiyu Shittu scored the last goal in the history of the stadium with the 1-1 equalizer. The last sporting event took place on June 22, 2002: the World Bowl in the NFL Europe between Berlin Thunder and the local Rhein-Fire team. 53,109 spectators attended the game and the spectacular show program (including with the rock band Status Quo ). Berlin Thunder defended its title and defeated Rhein Fire with 26:20.

On September 12, 2002 and November 6, 2002, the demolition of the stadium was initiated with a total of two explosions. However, many parts of the former Rheinstadion were previously expanded and used for other purposes. Today, seat shells from the Rheinstadion can be found on many sports facilities in Düsseldorf and two block signs in the Paul-Janes-Stadion remind of the former family blocks of Fortuna fans.

Recordings of the explosions were used in the episode "Explosiv" of the RTL series Alarm for Cobra 11 .

The stadium, initially named LTU arena , was built at roughly the same point, slightly shifted to the north .

During the soccer world championship 1974 the following games took place in the stadium:

During the European Football Championship in 1988 the following games took place in the stadium:

In addition to the soccer world and European championships, there were also other outstanding sporting events in the Rheinstadion. After the Second World War in 1945, the first post-war football match between the British Army and Arsenal London took place here.

In 1970 the construction site of the Rheinstadion was the venue for the Davis Cup semi -final between Germany and Spain, which ended 4-1 for Germany. The game was played on an asphalt court specially created for this event . The spectators watched the encounter from an already completed section of the grandstand.

In the last few years of its existence, the Rheinstadion was also a stage for concerts. Bon Jovi and Metallica made guest appearances in 1993, Marius Müller-Westernhagen and Pur 1996 in front of sold-out stands. At the anniversary concert of the Toten Hosen in 1997 there was an accident in which a sixteen-year-old spectator (Rieke Lax from the Netherlands) was crushed by the crowds at a barrier and suffocated.