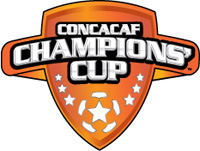 The logo of the Champions' Cup

The CONCACAF Champions League (also Scotiabank Champions League ) is a football competition for club teams in North and Central America and the Caribbean that has been held under this name since the 2008/2009 season and is organized by CONCACAF. It is the direct successor to the CONCACAF Champions' Cup , which was played from 1962 to 2008. The respective winner is qualified for the FIFA Club World Cup.

The forerunner of the competition was the CONCACAF Champions' Cup , which has been held annually in spring since 1962. The CONCACAF Champions 'Cup was comparable to the European Champion Clubs ' Cup or the South American Copa Libertadores , but it did not have the same status for the clubs. The competition offered comparatively little financial incentive for the clubs, and the dominance of teams from Costa Rica and Mexico resulted in less public interest in the other countries. Since Mexican clubs were able to take part in the Copa Libertadores, the Champions Cup has also lost importance in the Primera División of Mexico. The Mexican teams were more interested in getting a place in the Copa Libertadores through the InterLiga than in participating in the Champions Cup.

Since 2005, the winner of the CONCACAF Champions Cup has participated in the FIFA Club World Cup, and the runner-up received one of the three CONCACAF starting places in the Copa Sudamericana , which was not restricted to South American teams until 2008. These changes had led to increased interest in the Champions Cup from both the club and the fans.

In 2001, instead of the Champions Cup, the CONCACAF Giants Cup was organized, in which the teams with the highest number of visitors from their respective national leagues played against each other. The 2001 Giants Cup was won by Club América from Mexico.

Parts of this article seem out of date as of 2017 .
Please help to research and insert the missing information .

All games in the tournament will be played in the evenings of the week Tuesday through Thursday, following the European model. The qualifying matches are played from July to the beginning of August, the group stage runs from August to the end of October. The knockout round begins in March and ends with the final at the end of April.

A total of 24 teams take part in the tournament. The previous year's winner is not automatically qualified.

If a team that is actually qualified does not meet the license conditions or does not compete, the free space will be reassigned by Concacaf. This can change the number of teams per national or regional association.

The qualified teams are drawn into 8 groups of 3 teams each, whereby two or more teams from the same national association cannot normally be drawn into the same group.

The group stage consists of four game days, with each team playing once at home and once away against the other two teams. The three-point rule is used here. The eight group winners qualify for the quarter-finals. In the event of a tie at the end of the group stage, the following rules are used to determine the group winner:

The knockout rounds, including the finals, will be played in the home and away leg. The pairings are determined by a seeding list based on the results of the group phase, with the strongest team in the group phase meeting the weakest in the quarter-finals, etc. The seeded team has home rights in the second leg. The away goals rule also applies here (with the exception of extra time ) . The winner will qualify for the FIFA Club World Cup .

The finals and winners

The “Golden Shoe” has been awarded since 2008. Since 2011, the best player has also been selected for each tournament.