The Club Atlético Osasuna , CA Osasuna for short and also Osasuna Pamplona in the German-speaking area , is a Spanish football club based in Pamplona (Basque Iruñea or Iruña) in Navarra . It was created on October 24, 1920 from the merger of the two clubs in the city, Sportiva and New Club. The Basque word Osasuna means "health" or "strength". The players wear red home shirts with blue pants and black socks. Like Real Madrid , FC Barcelona and Athletic Bilbao , CA Osasuna has never been converted into a public company and is therefore owned equally by the club members.

The club plays its home games in Estadio El Sadar , which opened in 1967 and now has 17,286 seats. In December 2005, the stadium was renamed based on the regional tourism slogan "Reyno de Navarra", " Kingdom of Navarra ". Osasuna was the first Spanish soccer club to change the name of its stadium due to a sponsorship deal. The venue has had its old name again since 2012.

In 1982, in Tajonar, five kilometers away, the Escuela de Fútbol de Tajonar football school was opened, where young players are trained for Osasuna. The sports facilities of Tajonar ( Instalaciones Deportivas de Tajonar ) cover an area of ​​more than 300,000 m 2 and, in addition to the school, include two playing fields each with natural and artificial turf, office buildings and a lake.

In the 1934/35 season Osasuna played for the first time in the Primera División . The club has spent a total of 27 seasons in the highest Spanish league so far, the best placings are two fourth places in 1990/91 and 2005/06 . December 30, 1990 went down in club history. On that day Osasuna beat Real Madrid 4-0 at the Estadio Santiago Bernabéu . Polish striker Jan Urban scored three goals and became a legend. 1994 to 2000 was relegated to the second division. After six seasons in the Segunda División, Osasuna returned in 2000 to the top division . The team finished 17th in the 2007/08 season at the end of the season and secured relegation with just a single point ahead of Real Saragossa . In 2014 there was another relegation. While relegation to Segunda División B could only just be avoided in 2015 , at the end of the 2015/16 season he was promoted again to the Primera División 2016/17 . 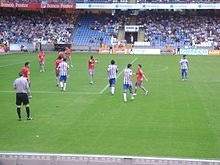 In the 2006/07 season , the club failed in the UEFA Champions League qualification against Hamburger SV 0-0 and 1-1 and started in the UEFA Cup. There he met Bayer 04 Leverkusen in the quarter-finals . The first leg in Leverkusen was won 3-0 by the Spaniards, the second leg 1-0. It was not until the semi-finals that the eventual winner, Sevilla FC , was eliminated.

Clubs of the Spanish Primera División in the 2019/20 season