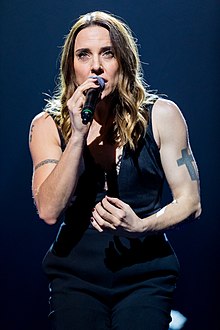 Melanie C at Night of the Proms 2017 in Mannheim

Melanie Jayne Chisholm (born January 12, 1974 in Whiston near Liverpool , Merseyside ), also known as Melanie C or Mel C , is a British singer and songwriter who became famous for her membership in the girl group Spice Girls . There she was known both as "Mel C" and "Sporty Spice", as she often wore sports suits , especially in the early days , and also did flick-flicks . In 1998 she began a successful solo career as Melanie C. Melanie C has sold more than 105 million records, including 20 million as a solo artist and more than 85 million with the Spice Girls.

From 1994 to 2001 she was a member of the Spice Girls as "Sporty Spice" , one of the most famous girl groups of the 1990s. After the group broke up, her solo career was the most successful to date, although she also failed to build on the previous successes of the Spice Girls.

Chisholm is also successful with her albums in German-speaking countries. The best known songs here are Never Be the Same Again and I Turn to You from their debut album Northern Star (the dance version of I Turn to You was their biggest hit so far). Chisholm began producing rock music with empathetic lyrics after the Spice Girls ended.

Since the second album Reason did not sell well, the record company Virgin Records broke Chisholm's contract. In 2005 she founded her own label Red Girl Records and produced her third album Beautiful Intentions herself, which cost her around one million euros.

Despite good reviews and the successful first single Next Best Superstar , the album initially did not sell as well as expected. In the British album charts, Beautiful Intentions only made it to number 24 in the first week of sales.

Soon after, a new single was released in Germany, First Day of My Life . This by Guy Chambers and Enrique Iglesias written song is the theme song for the ZDF - Telenovela Path to Happiness (then Julia - Wege zum Glück ). The music video was shot on August 26, 2005 in downtown Hanover . On October 1, 2005, Chisholm performed First Day of My Life at Wetten, dass ..? on. Shortly thereafter, she was number 1 in the German music charts , which is her greatest success in Germany to date. The single became one of the most successful singles of 2005. The song was added to the German version of the album. In December 2005 she went on a tour through Germany. Two months later, Beautiful Intentions was re-released and was now significantly more commercially successful. It reached the top 20 again in Germany after its first entry into the top 15. In Portugal, the album took the top spot for ten weeks. The album has significantly outbid her second work Reason in sales; the follow-up single Better Alone reached number 51 in Germany.

On December 8, 2006, Chisholm's first live DVD was released with the title Live Hits . The DVD contains recordings of a concert that took place in camera on August 31st in London (The Bridge) .

On March 16, 2007, The Moment You Believe was released in German-speaking countries as a pre- single for the album This Time , while a cover version of The Strangeloves' 1960s song I Want Candy was released in Great Britain on March 26 . This song was also the theme song of the film of the same name with Tom Riley , Tom Burke and Carmen Electra . The Moment You Believe entered the German single charts at number 15; I Want Candy reached number 24 on the UK singles chart. The album This Time reached number 15 in Germany and number 8 in Switzerland. In England, the record was only number 57, which, according to some critics, was due to the fact that the preliminary single I Want Candy did not reproduce the sound of the album accordingly. On June 8, 2007, the third single from This Time, Carolyna, was released, which reached number 28 in Germany and number 49 in England.

Six years after their separation, the Spice Girls announced in June 2007 a world tour with twelve concerts in eleven cities for late 2007 / early 2008 with the original cast. Earlier attempts at reunion had failed because Melanie C was not ready for it for a long time: “The Spice Girls were incredible and I am proud to have been a part of them. But now we are all older and have changed so much that I think it was a very nice part in my life, but in the past. "

Before the reunion tour with the Spice Girls, the title track from This Time was released as the fourth single in October 2007 . The version available in Germany contained the title track of the ProSieben advertising campaign We love to entertain you as a bonus title . The highest position in the German single charts was position 69.

In April 2008, Chisholm released both her single Carolyna and the album This Time for the first time in Canada, which was accompanied by a tour of Canada in May.

In the musical Blood Brothers by Willy Russell, she played the leading role of "Mrs. Johnstone ”, for which she was nominated for two prestigious musical awards, including a. for the Olivier Award as Best Actress in a Musical .

In September 2011 their fifth album The Sea was released . The first German single was the song Rock Me, which was used by ZDF as the title song for the women's soccer World Cup . This was followed by the hits Think About It and Let There Be Love (an English version of the Rosenstolz hit love is everything ). In England she also released the song Weak as a single. In November and December she presented her album to audiences in Germany, Austria, Switzerland and England as part of the The Sea Live 2011 tour. At a concert in London Brian May came on stage with her and played the Queen's hit One Vision with her , and when she performed in Munich, X-Factor Germany winner David Pfeffer visited her for the First Day of My Life with her as well as singing his single I'm Here .

Her sixth studio album, Stages , was released in September 2012 .

In 2012 Chisholm was a member of the jury for the British talent show "Superstar". The show was looking for the actor of "Jesus" for the "Jesus Christ Superstar Arena Tour" together with Andrew Lloyd Webber. In the extraordinarily successful tour of the musical, Chisholm plays the character "Mary Magdalene". Due to the sold out arenas, another tour for Australia and new British dates have now been announced. Chisholm also received the “Whats On Stage Award 2013” ​​for best musical actress for her interpretation of “Mary Magdalene”.

In December 2012, Chisholm and her Spice Girls colleagues opened the musical “Viva Forever”, which is based on the songs of the girl band, but does not tell their story.

In 2014 she also appeared in the music video Word Up! the British girl group Little Mix to support the charity campaign Sport-Relief .

In November 2015 she interpreted the classic For Your Eyes Only by Sheena Easton on German television for the premiere of the new James Bond film Specter .

In October 2016, Chisholm's seventh studio album Version of Me was released .

Chisholm was in a relationship with the contractor Thomas Starr from 2002 to July 2012 ; their daughter was born on February 22, 2009.