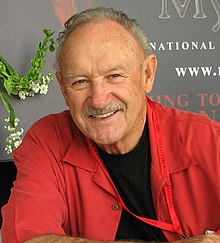 Eugene "Gene" Allen Hackman (born January 30, 1930 in San Bernardino , California ) is an American actor and multiple Golden Globe and two-time Oscar winner. Hackman was one of the leading American character actors and achieved, among other things, in 1971 with the role of the unconventional drug investigator Jimmy "Popeye" Doyle in French Connection - hot spot Brooklyn great fame.

Hackman grew up with his grandmother in Danville in the US state of Illinois on. His parents divorced when he was a child. Hackman dropped out of school in 1947 and joined the military despite being a minor. He served as a radio operator in the Marine Corps for several years.

After his release, Hackman studied journalism in New York and worked for numerous radio stations across the country. In the early 1950s, he decided to become an actor. He attended the Playhouse Acting School in Los Angeles and made his stage debut in The Curious Miss Caraway . He dropped out of training there after three months.

Back in New York, Hackman shared a one-room apartment with his former fellow students Dustin Hoffman and Robert Duvall , with whom he later remained friends. All three actors lived in very modest circumstances for years. It wasn't until the late 1960s and early 1970s that the three actors made their breakthrough in Hollywood .

After several appearances on Broadway (including Any Wednesday ) and on television (The United States Steel Hour) , Gene Hackman starred in his first feature film, The Rabid , in 1961 . In 1964 he met Warren Beatty while filming Lilith , who three years later gave him a role in the criminal drama Bonnie and Clyde . The great success of the film pushed Hackman's career further. He was also nominated for an Oscar for Best Supporting Actor for his portrayal of the gangster Buck Barrow . In 1970 he received another nomination for his role in the family drama No Song for My Father .

Gene Hackman was already over 40 when he made his international breakthrough in 1971 with the New Hollywood classic French Connection - Focal Point Brooklyn . With a low budget of 1.8 million US dollars realized and without Stars film became a huge box office success and played more than 50 million dollars. Hackman (who got the role after it had been rejected by numerous other actors) appeared as a fanatical drug investigator "Popeye" Doyle and was awarded an Oscar for his performance.

Hackman had now finally established himself as one of the leading character actors in Hollywood and was able to maintain this status for a good three decades. His fee rose from $ 100,000 (French Connection) to $ 2 million ( Superman ) in the 1970s .

After the French Connection, there followed appearances in Die Höllenfahrt der Poseidon , Asphalt-Blossom with Al Pacino and The Dialogue by Francis Ford Coppola . In 1975 he starred in one of the most important neo noir films, The Hot Trail, directed by Arthur Penn . In 1978, 1980 and 1987 he played the villain and Superman antagonist Lex Luthor in the Superman films with Christopher Reeve . In 1983 he starred in Ted Kotcheff 's war film The Daring Seven with Fred Ward . For his role as FBI agent Anderson in the southern drama Mississippi Burning , he was again nominated for an Oscar for Best Actor in 1988 .

In the late 1980s and early 1990s, Hackman appeared to be less demanding in choosing roles and, apparently for purely financial reasons, starred in numerous films that received little response from critics and audiences. Between 1988 and 1991 alone, the actor was seen in eleven films. He declined the offer as director and actor (of Hannibal Lecter ) to realize the psychological thriller The Silence of the Lambs , because he did not like the dark material.

Gene Hackman succeeded from 1992 to stabilize his career through a careful selection of roles. He reduced his workload and usually made one or two films a year. He celebrated some of his greatest commercial successes in the 1990s. Among other things, he was in Clint Eastwood's Late West Merciless with, for which he received an Oscar for Best Supporting Actor. He was also in the Grisham film adaptation of The Company , in the western Faster Than Death and as a submarine commander in the mutiny film Crimson Tide . In Der Staatsfeind Nr. 1 he took up the role profile of a wiretapping specialist again, which was intended as a homage to the character he portrayed in the psychodrama Der Dialog . In the film comedies Snap Shorty , The Birdcage - A Paradise for Shrill Birds , The Royal Tenenbaums and Heartbreakers - Warning: Sharp curves! he showed his comic talent.

In 2003 he stood in the court drama The Judgment , again based on a novel by John Grisham , for the only time with his friend Dustin Hoffman in front of the camera. His last film so far was the comedy Willkommen in Mooseport (2004) with Ray Romano . Until 2004 he worked in over 80 film productions.

On July 7, 2004, Hackman announced in an interview with talk show host Larry King that he had no further film offers and that he assumed that his film career was over. In fact, Hackman has not appeared in any film since. In 2008 he confirmed in an interview that he no longer wanted to act as an actor. Beginning with television appearances in 1959, his work includes participation in 100 film and television productions.

Gene Hackman worked as a writer in addition to his acting career. He wrote in collaboration with Daniel Lenihan u. a. the novels Wake of the Perdido Star , Payback at Morning Peak and (German) Jacks Rache.

Hackman has been married to Betsy Arakawa since 1991 and lives in Santa Fe , New Mexico . He has three children from his first marriage to Faye Maltese.

His voice actors changed over the decades. Most often Hackman was dubbed by Horst Niendorf , who spoke to him nineteen times between 1971 and 1990. Since 1993, Klaus Sonnenschein has lent him his voice eleven times. Hackman was also dubbed by Hartmut Neugebauer , Engelbert von Nordhausen , Rolf Schult , Michael Chevalier and Wolfgang Kieling .

Gene Hackman was also active as an amateur racing driver in sports car races for several years between 1978 and 1984 . He competed in the Daytona 24-hour race and the Sebring 12-hour race , among others .