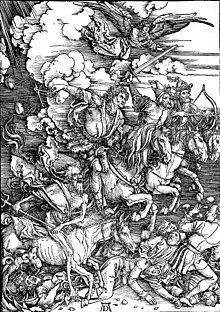 Apocalyptic is an art term derived from apocalypse (Greek: ἀποκάλυψις apokálypsis, "revelation", "revelation"), which is applied to phenomena that produce ideas similar to those found in the Jewish and Christian apocalypses of antiquity . The focus is mostly on ideas about the end of the world . There is no clear definition of apocalyptic that is undisputed in science.

Friedrich Lücke defined the term “apocalyptic” for the first time in 1832 as end-time prophecy. Apocalyptic is defined in terms of the similarities between the Jewish and Christian apocalypses. In addition to a specific, periodic understanding of history, a visionary form and imagery language, pseudonymity, an educated and artistic style as well as the appearance of an angelus interpreter who conveys and explains the divine revelation are characteristic. This definition is still effective today as apocalyptic, doomsday mood in the background.

Based on this popularized definition, the term was transferred to phenomena of other religions that came into question as the origin of the Judeo-Christian tradition ( Persia , Mesopotamia , Egypt ) or were influenced by it. In a further step, the transfer to phenomena that had no (direct) connection to Christianity and e.g. Some of them weren't even religious in nature. However, many of these phenomena are incompatible with the original definition.

In research, Lücke's definition also turned out to be inadequate. In particular, the distinction between apocalyptic and eschatological phenomena was hardly possible. In addition, it was also unclear whether apocalyptic only served as a generic term for apocalypses or had a meaning beyond that.

Because of this ambiguity, a conference was held in Uppsala in 1979 to clarify the problems. The representatives of very different humanities only agreed that the previous use of the term was inadequate. However, they could not agree on a definition.

In essence, there is now agreement that apocalyptic cannot be just a generic term. Apocalypse itself is the genus to which the apocalypses belong. Apocalyptic, on the other hand, is an underlying phenomenon. Furthermore, messianism and chiliasm should be distinguished from apocalyptic.

However, there is disagreement as to whether a definition of apocalypse must precede a definition of apocalypse. The apocalypse group of the Society of Biblical Literature's Genres Project around Old Testament scholar John J. Collins and New Testament scholar Hartmut Stegemann answered this question in the affirmative . However, both are based on fundamentally different ideas of apocalypses. While Collins defines the external form (narrative report of a revelation of transcendent reality), Stegemann understands apocalypses as literature of order and compares them with today's natural science: Apocalypses arose due to sociological circumstances that required new (scientific) knowledge (especially in astronomy ) had to claim a divine origin in order to assert itself.

Some characteristics of apocalyptic phenomena

Although apocalyptic is a sociological phenomenon, it begins in the individual who feels fundamentally threatened in the very core of his identity. At first it does not matter whether this threat is real or imagined, it is only relevant that the individual feels threatened . The individual is confronted with demands that he cannot justify himself to fulfill. At the same time, it is aware that non-fulfillment leads to social self-exclusion. This situation becomes a sociological phenomenon when different individuals with a similar feeling of threat come together and a kind of movement forms.

This movement is mainly characterized by a negative worldview. The threat experienced in concrete situations is traced back to principles that work in the world without the apocalyptic believing that he can influence them. From this common worldview, however, the most varied of consequences can be drawn, which can lead from flight to activist world change, from pacifism to terrorism.

Due to the various possible consequences and the internal differences that result from the individual roots of apocalyptic, an apocalyptic movement appears very heterogeneous from the outside. Although the common focus is initially on the inside perspective, the apocalyptists are well aware of the differences between them. There can also be arguments and mutual hostility, but if there is a threat from outside, people usually stick together.

However, many apocalyptic phenomena do not reach the size and lifespan that is necessary to develop this heterogeneity. At its core, however, it is always pre-trained.

Relevance to the present

From the common negative worldview that connects the heterogeneous groups of an apocalyptic current, the relevance to the present of apocalyptic thinking can be derived. Contrary to the outward impression that the biblical apocalypses in particular create, the subject of an apocalyptist's interest is not in the distant future, but in the present. He is concerned with their interpretation.

Interestingly, the apocalyptic's interest in the present does not consist in a mere defense of the tradition that originally established their identity. Rather, the question arises as to what actually constitutes their identity. On the basis of this reflection, they form a resistant subculture from traditional and new elements, which helps them to withstand the current threatening situation as a retreat.

As can be seen from the previous characteristics, apocalyptic does not necessarily have to be a religious phenomenon. However, it is always a phenomenon that expresses the “world” in a special way. The apocalyptic does not only want to criticize a social or systemic aspect, he claims to have recognized the way "the world" works. A distinction must be made between language and what is meant. Because “the world” usually stands for a reality that is interpreted as (self-) destructive. Above all, it is the unquestioned basic assumptions of a society that are called into question by apocalyptic, not the physical existence of the world.

As a result, apocalyptic phenomena are often ethically charged. They claim to have discovered the right world, the actually important good. It is precisely this ethical claim of apocalyptic that drives the apocalyptic out of society, since the apocalyptic ethos contains only a few demands for action that are considered sensible in the majority society - and vice versa.

In fact, only the “last battle” remains: the existence of the existing society and the apocalyptic are mutually exclusive. Usually it is the established worldview that prevails, the apocalyptic, however, rub themselves up or withdraw. Sometimes such groups can survive a long time before they perish. But there is also the (seldom realized) possibility that the apocalyptics themselves will become the majority society in the course of time.