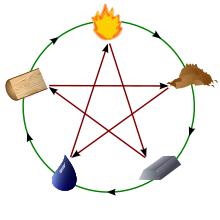 Fēng Shuǐ , also Fēngshuǐ  [ fɤŋ ʂu̯eɪ̯ ] ( Chinese 風水  /  风水  - "wind and water") is a Taoist theory of harmony from China . The aim of Feng Shui is to harmonize people with their surroundings, which is to be achieved through a special design of living spaces. The historically older term for Fengshui is Kanyu ( 堪輿  /  堪舆 , kānyú , Jyutping ham 1 jyu 4

), a short form for the term "look at the mountain and the land and evaluate" or "watch the sky and the earth". According to the mystical idea, Feng Shui should be able to "make the spirits of air and water inclined".

One of the traditional areas of application of Feng Shui in China is the planning of tombs ( ancestral cult ). Feng Shui has also had a significant impact on Chinese gardening . The principles of Feng Shui can also be taken into account in room furnishings, house architecture , landscaping and urban planning . The room design and building design are based on various rules that are intended to ensure that so-called “stubborn energies” cannot settle in these rooms and that Qi ( Wade-Giles : Chi ) can flow freely.

Feng Shui is based on Chinese philosophical systems such as the yin and yang doctrine, the eight trigrams oriented towards the cardinal points and the five-element theory . For some years now, the teachings of Feng Shui have also experienced increasing interest in Western architecture and interior design - there is also a merging of Western ideas of esotericism with Feng Shui.

The term "Feng Shui" is an abbreviation for a sentence from the book of rites by Guo Po (around 300 AD): "Qi is dispersed by the wind and stops at the border of the water." The terms wind and water have since been used for used the art of protecting the qi from the wind and influencing it with water.

The teaching of Qi forms the basis for developing Feng Shui. In Daoism, Qi is the invisible life energy that flows all around us, in every being and every cell and animates and shapes everything. According to the teachings of Feng Shui, Qi can now be accumulated and directed through planned intervention in the architecture. The task of a Feng Shui consultant is therefore to recognize, harmonize and increase the movement of Qi in the environment and in the house. A high accumulation of favorable Qi can lead to positive results in health, harmony and success of the person.

The teaching of Yin and Yang: Yang is the Qi of mountains and roads, Yin is the Qi of calm and water. The teaching, which comes from Daoism, promotes the balance between all opposites. In New Age Feng Shui, the teaching of Yin and Yang is only applied to the apartment, such as the Yang areas, i.e. the active areas such as the study and living room, and the Yin areas, the relaxation areas such as the bedroom and the living room Meditation room. Each area is tailored to its functionality and the arrangement of the rooms is designed harmoniously.

The teaching of the five elements : The energy is analyzed and balanced not only on two, but on five levels, namely earth, metal, water, wood and fire. Fire counts as big, wood as small yang, metal as small, water as big yin, and the earth as neutral . Knowledge of the effects of color, shape, dimensions and sound on people is very important here. The compensation of the location can be done by arranging and attaching objects, colors or remedies.

The Luan Tou , the landscape school, is the oldest school in Feng Shui and is still largely unknown in the West. The positioning of the house in relation to the landscape formation is evaluated.

The compass theory (Li Qi Pai): The Luopan (Lopan), the geomancer's compass, symbolizes the connection between heaven and earth through its shape (a circle in a square). According to the teaching, the influence of the stars manifests itself in certain formations of nature. By measuring the direction of the compass, the energetic quality of the house to be examined can be determined.

The teaching of the flying stars (also called flying stars ) is part of the Li Qi Pai . She analyzes the influences of nine “stars” and their temporal influences on people in relation to the landscape, house or apartment. The nine "stars" correspond in characteristics and properties to the eight trigrams on which the I Ching is based, plus another "star" that symbolizes the middle. The change in time also changes the optimal positioning of Yin and Yang around a house. As a result, there are favorable and unfavorable influences that can be taken into account through the correct use of the rooms in the house.

The oldest school in classical Feng Shui is Luan Tou , known in the west as the "school of forms". It is about the optimal selection of a building site that is protected by the natural landscape formation. Luan Tou was used for residential houses as well as for tombs, whereby in Chinese history sometimes one, sometimes the other application dominated over time. Li Qi Pai , the "formula school", works with the cardinal points, which are measured on the house with the Luopan (Lopan), a compass, and transferred to the house floor plan, as well as the temporal influences. The two most popular directions of this school, the "Flying Star Method" and the "Eight House Method", can both look back on long traditions. The “secrets” of the flying star method were first presented to the Chinese public in a book at the beginning of the 20th century, after having been in use for centuries.

Feng Shui is traditionally viewed as a philosophy that combines artistic as well as science-like and administrative elements. The current separation of art and science therefore creates difficulties in understanding the philosophical background. The universal approach focuses on people themselves and avoids any abstraction of the object. Up until the 19th century there were no written instructions, only rules of experience that were passed on and applied individually. In this way, the transmission also served as an instrument of power for the imperial elite.

In classical Feng Shui only very few objects are used as aids to harmonize rooms, such as amulets , landscape paintings and calabashes .

Feng Shui was banned in China by Mao Zedong after the communist revolution . Many Feng Shui scriptures were destroyed and practitioners were forced to give up teaching. Due to the repression in the Chinese homeland, many masters of the Feng Shui disciplines were forced to emigrate. After the ban and the expulsion from communist China, classical Feng Shui has developed differently depending on its origin. Feng Shui from Hong Kong differs from Feng Shui from Malaysia or Taiwan. However, there is an increased trend towards the Chinese classics.

In the People's Republic of China, Taiwan and Hong Kong, new buildings (sometimes complex construction projects such as high-rise buildings) are sometimes built according to the rules of classic Feng Shui.

In the West, the mixing of some traditional Chinese Feng Shui basic ideas with ideas of the New Age and Esoteric movement has resulted in a new system that mainly uses Feng Shui as a method for harmonizing living spaces. The common practice in China of taking Feng Shui into account when planning building objects is only used sporadically in the West. The Neo Feng Shui system practiced in the West has its origins in the "Church of Black (Hat) Sect Tantric Buddhism" founded by Lin Yun in 1986 in California.

For example, theories of color design and the energetic influence of crystals and scents are included. With the use of numerous aids such as wind chimes, crystals, indoor fountains, gold stones, colored fabrics or water posters, the flow of the life energy Qi in living spaces should be adjustable.

The Neo-Feng-Shui or New-Age-Feng-Shui ignores the cardinal points and aligns measures to the house entrance or the apartment door, while classical Feng Shui in China tries to exert influence as early as the construction work. One of the most popular methods in Neo Feng Shui, the so-called three-door bagua, can only be traced back to a very limited extent to classical sources: In the Shuo Gua , one of the ten wings of the I Ching , there are descriptions of the eight trigrams that can be found reinterpret the meanings used by neo-feng shui practitioners with a lot of imagination. In Shuo Gua, however, each trigram is assigned a direction, but this direction assignment was dropped by Lin Yun.

The classical teaching of Feng Shui avoids any universal definition of the meaning . This applies to both the elements and the “modes of action”. In the modern context of application in the West, a model representation of Qi similar to a scientific model is occasionally discussed.

“Feng Shui is part of a system of philosophical thinking from ancient China. Some elements of Feng Shui as well as other Asian teachings have been integrated into Western popular culture in recent years. These elements have become a kind of cultural fast food - easily accessible, even without detailed knowledge of the underlying ideas. [...] What we market as Feng Shui today often has little or nothing to do with the original ideas. "

The theologian Rüdiger Hauth, former representative for sects and ideology issues of the Westphalian regional church , objected that Feng Shui is not scientifically founded; He also pointed out that the belief on which it is based is incompatible with the Christian one.

An organization of the skeptics movement criticized the fact that Feng Shui in service offers is often associated with other concepts that are doubted from a scientific point of view, such as electrosmog , radiesthesia or earth radiation .