The title of this article is ambiguous. Further meanings are listed under Cyberpunk (disambiguation) .

Cyberpunk , formed from the terms cyber (from ancient Greek κυβερνάω for control or direct ) and punk , is a dystopian branch of science fiction literature that emerged in the 1980s. The term first appeared in 1980 in a short story of the same name by Bruce Bethke and was eventually coined by Gardner Dozois to describe the works of William Gibson (specifically the Neuromancer trilogy ). Cyberpunk is considered the film noir among the science fiction genres. 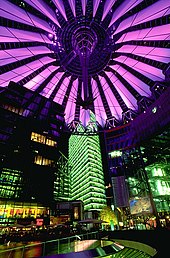 In contrast to the classic utopias of many other science fiction genres, the world of cyberpunk is not shiny and sterile-clean, but gloomy and characterized by violence and pessimism . Originated in the 1980s, it reflects the emerging criticism of the increasingly felt commercialization and urbanization . In this dystopia, the states are controlled by large corporations who abuse the state monopoly power for their own purposes, whereby the physical and economic security of the individual (previously existing in developed countries) has been lost. The promise of a better world through technological progress has not been kept. The high technology does not serve the well-being of the people, it is used for general monitoring and tuning of living organisms by means of cyberware .

Some readers and critics see influences of the criticism of capitalism in this scenario : The corporations have taken power, governments no longer exist or play a very subordinate role. Private, paramilitary security services ensure “order” . The boundaries between reality and fiction are often blurred with technology, such as with the concept of cyberspace coined by William Gibson - a similar technology is called Metaverse by Neal Stephenson - or SimStim.

Against this background, cyberpunk often paints the picture of a subculture that emerged as a counterpoint to a new world order without social and personal security; Hackers are popular in this role . The main characters are usually the losers in this development. They are adventurers and adventurers who - often involuntarily - lead a life away from the large corporations "in the shadow" of society. Many narratives oppose them as protagonists of the power and ruthlessness of the unleashed corporations.

In the 1960s, Philip K. Dick , who took androids with dreams of electric sheep? (1968) provided the novel for the film Blade Runner , anticipating many important topics of the later cyberpunk, although he was not a protagonist of cyberpunk (due to his much earlier work) . John Brunner was also pioneering , especially with his novels Morgenwelt (1968) and Der Schockwellenreiter (1975). Thematic ancestors of cyberpunk are also Daniel F. Galouye , especially his novel Simulacron-3 (1964), David R. Bunch with Moderan (1972) and John Shirley with Transmaniacon (1979). Harlan Ellison and Harry Harrison also provided important influences .

Cyberpunk in the narrower sense can initially only be described as films and novels from around 1980 to around 1994, as the term was later expanded significantly. The first works for which the term cyberpunk was used are probably the film Blade Runner (1982) by Ridley Scott and the novels Neuromancer (1984) by William Gibson and Software (1982) by Rudy Rucker . Also the mangas Akira (1982) by Katsuhiro Otomo and Ghost in the Shell (1989) by Masamune Shirow , the anime Bubblegum Crisis (1987) by Hiroshi Ishiodori and Hiroyuki Fukushima, the television series Max Headroom and the radio play series The Last Detective (both 1984) can be considered early examples. The collaboration and joint appearance (with mirrored sunglasses and black leather jackets) of John Shirley, Bruce Sterling and William Gibson as the Mirrorshades group at the beginning of the 1980s contributed decisively to the genre's breakthrough . From 1983 they published the fanzine Cheap Truth .

Around 1985 a real boom set in in the science fiction sector, as a result more and more authors and also works by "classic" science fiction authors were assigned to cyberpunk, such as Greg Bear's Blood Music (1985). If the authors were rather unhappy with the cyberpunk drawer before, a real countermovement set in: Once again the "death of science fiction" was announced, cyberpunk should be its last expression. In the meantime, the writers turned to new fields, William Gibson and Bruce Sterling first switched to steampunk with The Difference Machine (1990) , then moved more and more towards contemporary literature , other authors such as Michael Swanwick increasingly integrated fantasy elements into their novels, as in The Daughter of the Steel Dragon (1993).

The first wave of cyberpunk can be declared over in 1994, although with Neal Stephenson in 1992 a new author brought a breath of fresh air to the genre. In the manga and anime area, Blame! (1997) Cyberpunk influences in connection with newer motifs of transhumanism and borrowings from space operas like the Ringwelt the genre in a different direction. During the boom period, one of the first PC adventure games, Neuromancer , appeared in 1988, which was to influence many later cyberpunk role-playing games on the PC.

Meanwhile, cyberpunk themes were about to go through music, role-playing games , comic books and computer games ever further into the mainstream - pop culture penetrated. Shadowrun (1989) can be regarded as the most popular cyberpunk role-playing game , whereby the PC game classic Deus Ex (2000) should also be mentioned, which so far represents cyberpunk on the PC most plausibly. With the release of Billy Idol's album Cyberpunk (1993), but at the latest with the film Matrix (1999), cyberpunk had become common property and thus more difficult to define as an independent sub-genre of science fiction. Typical cyberpunk technology topics such as nanotechnology , genetic engineering and virtual reality are now also dealt with by mainstream authors such as Frank Schätzing , Michael Crichton and Stephen King .

“I have my doubts that the Cyberpunk label is more than a sales aid. I don't know what the common denominator between Greg Bear, Lucius Shepherd, Norman Spinrad, William Gibson and Bruce Sterling ... I would be very concerned about evaluating cyberpunk as a literary movement or literary school. It is more about a circle of friends whose members praise each other. The best of these authors, for example Gibson, actually have something new to say ... "

- Darko Suvin : in an interview with Horst Pukallus

Digitization is used as a source of literary motivation. Stylistically, the genre consists of a mixture of characteristics of the hard-boiled-style crime novels and the literature of magical realism . The human ego that connects with technology appears as the central motif. It becomes a memory and processor issue. The biological structure of humans is increasingly linked to the functioning of the computer (brain = memory, processor). The medium of the computer and the Internet become a parallel world in which the individual (re) constructs himself. The dissolution of the ego in the data world can be accompanied by a loss of identity. The desire for eternal life can resonate in cyberpunk. The human ego is reproduced in or through the computer and thus made independent of the original connection to the body. The individual can be deeply interwoven with the data world, so that this state is interpreted as natural. In the 1980s the genre experienced a boom, which also led to the development of a proper inventory of characteristics. These features include:

The world of data is increasingly appearing as a black, romantic universe that has been transfigured by technology. In this context, the genre also sees itself as a revived neo-romanticism . The most famous novel of the genre Neuromancer coined the term as a word formation from Neuro , Romancer ("Fantast") and Necromancer .

List of well-known works in cyberpunk literature and those that are significantly influenced by it:

The quota machine is considered the first cyberpunk hypertext novel in German, published around 1995. In 2015, the quota machine 2.0 was created as a reconstruction in collaboration with Steffen Fritz at the German Literature Archive in Marbach

Cyberpunk can be classified with other genres under the umbrella term Dark Future . The genre is thematically related to film noir and science fiction , which is why cyberpunk can also be referred to as SF noir.

Typical scene in a cyberpunk game

In the 1980s and 1990s, there were several bands dealing with cyberpunk, particularly in the field of electronic music, including Manufacture , Skinny Puppy , Severed Heads , Front 242 , Front Line Assembly , Revolting Cocks , The Beatnigs , Haujobb and Clock DVA .

Individual albums that are thematically dedicated to cyberpunk are: