Furtwangen in the Black Forest

Furtwangen from the north

Furtwangen in the Black Forest is a town in the Schwarzwald-Baar district in Baden-Württemberg . The local companies , the Furtwangen University and, from a historical point of view, the watch industry are characteristic of the small town .

Furtwangen (bottom right) and the Kandel

Furtwangen taken from the Meisterberg

The city is between 850 and 1150 m above sea level. NN and describes itself as the "highest town in Baden-Württemberg". The city of Meßstetten on the Swabian Alb , which is between 737 and 989 m above sea level. NN is, measured by the altitude of the respective parish churches, is higher than Furtwangen. However, Meßstetten only claims to be "one of the highest cities in the Federal Republic of Germany". The Brend is at 1149 m above sea level. NN highest point in Furtwangen and is located northwest of the city. The city is beautifully situated at the intersection of three valleys and is surrounded by densely forested mountains.

The European watershed runs on the Black Forest ridge through Furtwangen . The district of Neukirch drains towards the Rhine and the North Sea, the urban area and the other districts drain towards the Danube and the Black Sea.

The “state-approved climatic health resort ” (the seal actually only applies to the Neukirch suburb ) is industrial, but also plays a role as a hiking and winter sports area for tourists. The Furtwangen University is also of great importance with around 6400 students, 3470 of them at the Furtwangen location.

In addition to the town itself, the municipality of Furtwangen also includes 4 other districts and 151 other villages, hamlets, Zinken, farms and houses.

With around 1870 liters of precipitation per square meter (average 1979 to 2006), Furtwangen is one of the rainiest and snowiest places in Germany. On the other hand, the city is located in one of the sunniest regions of the country with an annual solar radiation of 1110 kilowatt hours per square meter. The mean temperature is 5.7 degrees Celsius. Since the beginning of 1979, the data has been recorded by a private weather station that was set up on the Kussenhof at 956 meters above sea level.

The first mention is in a bull by Pope Alexander III. in the year 1179. Here the ownership of the municipality of Furtwangen including the church is confirmed to the St. Georgen monastery . The place must have been of considerable size (because of its own church) even then, but was probably founded only a few years earlier.

Furtwangen around 1900 in the same direction of view

The economic importance of Furtwangen increased. Markets have been held regularly in Furtwangen since at least the beginning of the 17th century , to the annoyance of neighboring towns. Only Empress Maria Theresia gave Furtwangen an official market right in 1761 (at the time when Furtwangen belonged to Upper Austria ).

The historical development differs significantly from the history of Furtwangen itself in many respects (e.g. rule and ownership relationships).

The city charter was Furtwangen until the year 1873. Earlier attempts to get the municipal law failed because Furtwangen time no town hall had.

After a series of fires in 1857, including a particularly devastating fire, citizens of the city founded the Furtwangen volunteer fire brigade (Pompier Corps) based on the Villinger model in August of the same year .

The Bregtalbahn (since 1892, closed in 1972) from Donaueschingen to Furtwangen was important for the economic development . Watchmaking shaped the artisanal and industrial history of the city. The Baden state government founded the first German watchmaking school here in 1850 . The first headmaster was the well-known engineer Robert Gerwig . A vocational school and the Furtwangen University developed from the watchmaking school . This made watchmaking in Furtwangen and the surrounding area more professional. Numerous watch factories were founded. However, watch production declined continuously after the First World War. Only companies that have developed further from the watchmaking and supply industry have survived. The result was a modern industry of metal processing , precision engineering and electronics , whose companies have a worldwide reputation. 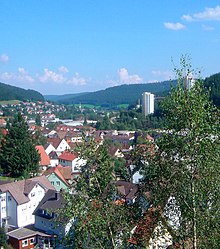 View over the city center

In 1806 the city became part of the Grand Duchy of Baden . The oldest seal of the city, which simply showed the coat of arms of Baden, dates from this time. From 1821 the seal showed the ruins of the Heidenschloss surrounded by pine trees. This arrangement has also been used in the coat of arms in a somewhat simplified manner since 1873.

Furtwangen was on the Bregtalbahn , which connected the city with Donaueschingen until 1972 . The line is now closed and completely dismantled between Furtwangen and Bräunlingen , so that Furtwangen no longer has a rail connection. The closest train station is Triberg on the Black Forest Railway .

Furtwangen is connected to various cities via several bus routes, the Südbadenbus, as part of the Schwarzwald-Baar transport association. In the urban area of ​​Furtwangen (excluding the districts) there is a volunteer-run citizens' bus to connect the residential areas on weekdays .

Furtwangen has one of the lowest unemployment rates in Germany.

In 2005, the then Federal Chancellor Schröder coined the term “Modell Furtwangen” for the unusual success of the Furtwangen companies, which was coined by many “ hidden champions ”: “This is because the narrow valley in the Black Forest is literally crammed with whatever we call them "hidden champions" who offer world-class products in many industries, from control technology to precision mechanics. Many of these companies are spin-offs from students from Furtwangen University . "

The tourist road B 500 and the German Clock Road lead through Furtwangen .

Furtwangen is predominantly Roman Catholic . Furtwangen was probably founded from the neighboring St. Georgen monastery . The town of Furtwangen was first mentioned in a papal document for the monastery in 1179. Today Furtwangen and its districts have a total of four parishes , which are combined with the parish of Gütenbach and the three parishes of Vöhrenbach to form the “ pastoral care unit Bregtal” and are looked after by a pastoral care team ( pastor , cooperator , parish officers ):

Until August 15, 2010 there was a branch of the Salesians Don Bosco in Furtwangen , who ran a youth hostel (especially for schoolchildren and trainees) with a youth hostel and got involved in school pastoral work and by helping out in the surrounding parishes. The Furtwangen ski boarding school was also integrated into the youth hostel .

The Protestant parish of Furtwangen came into being at the end of the 19th century, after the number of Protestants in the city had risen to almost 100 , mainly due to the watchmaking school . In 1901 the Protestant church was built. The Protestant pastor also looked after the parishes in Vöhrenbach and Gütenbach . In 2013 the three congregations merged to form the “Evangelical Church Community Furtwangen-Gütenbach-Vöhrenbach”.

Furtwangen, along with Gütenbach and Neukirch, was an important place for the founding of the old Catholic church in the 1870s. Up until the beginning of the 20th century there were strong conflicts with the Roman Catholic Church here. Today the area of ​​the old Catholic parish extends from Furtwangen to Villingen-Schwenningen and the Rottweil district. In addition, the independent parish of Gütenbach is also supplied. Your parish church is named Christ Resurrection .

A few years ago a small, free evangelical church was founded here.

A congregation of the Bund Freikirchlicher Pfingstgemeinden with a full-time pastor and its own parish hall at Baumannstraße 19.

The New Apostolic parish, founded in 1905, is relatively well represented and has its own church in Furtwangen on Geschwister-Scholl-Weg 5.

The Islamic community in Furtwangen has its own mosque, which has since been expanded.

A farm in Furtwangen- Neukirch has been the location for the exterior shots of the TV series “ Die Fallers ” by Südwestrundfunk since 1994 , and other scenes are regularly filmed in and around Furtwangen.

In 2007, a Ludwigsburg film and television production company wanted to produce a black comedy based on the urban legend that Furtwangen is the place with the highest suicide rate in Germany . The then mayor Richard Krieg threatened with an injunction, whereupon the company announced that there was no filming in Furtwangen, nor would the name of the city appear in production.

“ When I look back at this time, I can see that neither he nor, presumably, the rest of us would have survived without the integrity of the people of Rohrbach to whom this book is dedicated. "

Cities and communities in the Schwarzwald-Baar district

Districts of Furtwangen in the Black Forest