Königsfeld in the Black Forest

Königsfeld in the Black Forest is a municipality in the Schwarzwald-Baar district in Baden-Württemberg . The health resort is one of the centers of the Moravian Brethren .

Königsfeld in the Black Forest is located on the hilly eastern edge of the Black Forest on the border with the shell limestone landscape of the Baar . About 10 km northwest of Villingen not far from the federal highway 33 , Königsfeld is located on a slight slope above the Hörnlebach, which borders the town to the south and east and flows northeast of the town into the Sägeweiher, which once functioned as a reservoir for a sawmill.

Königsfeld is located at the intersection of two highways that lead on the one hand in a north-south direction from Schramberg to Villingen-Schwenningen and on the other hand in an east-west direction from Rottweil to St. Georgen .

The high altitude health resort of Königsfeld is shaped by the forest areas around the village. Agriculturally used areas are only found sporadically and mostly at a somewhat greater distance from the village itself. The red sandstone and granite found here were primarily used as local building materials for the historical buildings . In the district atlas of 1889, the quarry and the sand pit in the Kohlwald northeast of the village can still be seen clearly. In addition, the softwood that is abundantly available here was used.

The community borders in the north on Hardt and Eschbronn , in the east on Zimmer ob Rottweil , all in the Rottweil district . Furthermore in the east to Niedereschach , in the south to Villingen-Schwenningen and Mönchweiler and in the west to the city of St. Georgen , all in the Schwarzwald-Baar district. 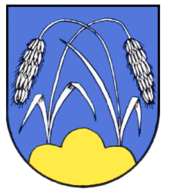 Königsfeld in the Black Forest (old coat of arms)

Zinzendorfplatz from the east (around 1814)

The remains of Bärenberg Castle from the 11th century are located on a spur of the Hutzelberg .

Königsfeld in the Black Forest is a planned settlement of the Moravian Brethren from 1806. In search of a suitable settlement location for the Brethren, the diaspora keeper Lorenz Nagel wrote in August 1804 about the Hörnlishof located here, on whose area of ​​only 150 hectares the later colony should arise:

Königsfeld thus became the first settlement to be established in the area of ​​today's Baden-Württemberg of the Brethren founded in 1727 in Herrnhut by Nikolaus Ludwig Graf von Zinzendorf .

The founding document of King Frederick I of Württemberg dates to August 12, 1806. The actual colonization began on April 21, 1807 with the surveying of the area, whereupon an overall plan as well as detailed plans were made by the Moravian brother Johann Gottfried Schulz in Niesky . The houses around Zinzendorfplatz were gradually built in the following years.

The first beginnings of tourism appeared very early. These were initially in close context with the religious life of the Moravian Brethren. This exercised a great attraction for Christians living in the diaspora from pietistic circles in Württemberg, the Palatinate and Switzerland. In addition, there was the visitor traffic of the educational institutions of the Brethren, which were established as early as 1809 for girls and 1813 for boys. Königsfeld's first building, the “Gemeinlogis” (from 1880 “Gasthof”, today “Herrnhuter Haus”) is symbolic of tourism, which was promoted early on. The first spa guests from Basel arrived there as early as July 1809.

The establishment of a doctor and the establishment of a pharmacy in 1815 were just as important for the care of the guests. Both were extremely unusual for a place of this size and ultimately part of the special rights granted to the colony in the charter of 1806. This achievement was to be reflected in a number of well-known doctors who had a significant influence on the development of the spa.

The implementation of the original planning was progressed step by step until the 1860s. A further development can only be determined after 1880, when the restructuring from the school location of the Brethren to the mountain health resort of Königsfeld began. This development - initially only to be observed in Wilhelminian style building in the action on Zinzendorfplatz and at Tannenhof in Friedrichstrasse - led to the town expanding westward across the border to the neighboring village of Buchenberg. Typical buildings of a health resort were built here and characterize the Hermann-Voland-Straße, which was later incorporated into Königsfeld. Large and small private pensions as well as hotels and sanatoriums are lined up here in loose buildings along the street, a small spa park has been created.

The administration, school and church of the Brethren were previously one unit, but after the turn of the century the political community of Königsfeld was created, which manifested itself in its own town hall and school building, with the change from the school location of the Brethren to the high altitude health resort Königsfeld finally being completed.

The municipality of Königsfeld in the Black Forest includes five districts in addition to the core town.

With the exception of the Königsfeld district, localities are set up in the districts within the meaning of the Baden-Württemberg municipal code. They each have their own local council and a local mayor as its chairman.

The Hörnlishof farm, which opened in Königsfeld in the Black Forest, was located in the Königsfeld district.

Königsfeld is located on the Swabian Dichterstrasse , the Ostweg , the Black Forest crossroad Rottweil-Lahr and the German Clock Route , which leads past many sights.

In Königsfeld there is the Albert Schweitzer Museum in Schweitzer's former home and a museum in the church building that deals with the history of the place and the Moravian Brethren. There is a village museum in the Buchenberg district.

The Evangelical Brethren has a very extensive tradition of blazes and the wind choir of the Evangelical Community as a whole plays regularly at church festivals in the main town in the church, on the square, in the streets and also at funerals. The brass ensemble Eurobrass comes from Königsfeld . There are also 2 music associations in the community: The Neuhausen Music and Costume Association and the Buchenberg Association for Trachtenkapelle Both have a long tradition. They accompany church and secular festivals with their brass music in their districts. In addition, the community's musical program has been greatly expanded to include music from the Zinzendorf Schools in Königsfeld. This offer consists of various choirs and orchestras, as well as theater groups, which are formed by students, teachers and former students.

Start of the Buchenberg trail

Start of the Enzianwiese trail

With the overall community consisting of the cooperation of the Moravian Brethren and the parish of the Baden regional church , Königsfeld is predominantly evangelical . In addition to the three regional Evangelical parishes, the Methodist Church , the Roman Catholic Church and the New Apostolic Church are also represented in Königsfeld.

The community is served by several regional bus routes and belongs to the Schwarzwald-Baar transport association. The nearest train stations are in Sankt Georgen (8 km) and Villingen (11 km), both of which are located on the Black Forest Railway . Up until 1981 Brigach also had the Peterzell -Königsfeld train station . The next motorway connections are AS Rottweil ( A 81 Stuttgart - Singen ) and AS Donaueschingen ( A 864 ) or the Bad Dürrheim motorway triangle ( A 81 ). The B 33 also passes in the immediate vicinity .

The Albert Schweitzer House in Königsfeld

Albert Schweitzer ; In 1923 he built a house in the Königsfeld district that his wife and their daughter lived in until 1933 during his stays in Lambaréné . In 1949, on the occasion of his 65th birthday, Albert Schweitzer was made an honorary citizen of Königsfeld. The Albert Schweitzer House has been a forum for information and communication since 2001.

Cities and communities in the Schwarzwald-Baar district

Districts of Königsfeld in the Black Forest