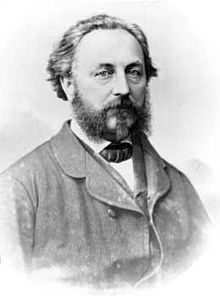 Robert Gerwig (born May 2, 1820 in Karlsruhe , † December 6, 1885 ibid) was a German civil engineer and national liberal politician in Baden .

The civil servant's son Gerwig grew up in Karlsruhe and attended the Lyceum until 1834. After his engineering examination in 1841 at the Grand Ducal Polytechnic School , later the Technical University, in his hometown, he joined the Higher Directorate for Hydraulic Engineering and Road Construction and was involved in the construction of railways and roads his entire professional life .

In July 1846 he married Lina Beger (1827–1895), the daughter of the Grand Ducal Baden domain director Beger; The couple spent their three-week wedding vacation in Baden-Baden .

In 1850 the Baden Ministry of the Interior appointed him provisional director of the new watchmaking school in Furtwangen . It was founded to promote the distressed watchmaking trade in the Black Forest . In this position he called on the "patriotic artists" to design a new clock case, from which the "train house shape" emerged as the epitome of the Black Forest cuckoo clock . Gerwig left his post in Furtwangen in 1857 at his own request. 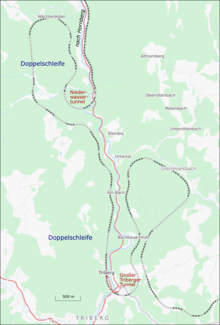 Gerwig also remained active as director in Furtwangen for the senior management and designed a. a. the Albtalstraße (L 154) from Albbruck to St. Blasien (from 1853), the Obersimonswald –Furtwangen connection (1855–1857) and the Reichenaudamm (1856–1858). In 1859 he planned the railway bridge over the Rhine between Waldshut and Koblenz in Aargau , and from 1860 to 1863 he planned the continuation of the Hochrheinbahn from Waldshut to Konstanz . At the same time, the road from Vöhrenbach via Friedrichshöhe to Villingen was built under his leadership from 1859 to 1863 . His main work is the planning and construction of the Black Forest Railway Offenburg - Singen from 1863 to 1873. To overcome the slope of the Gutach Valley , Gerwig created two double loops between Hornberg and Triberg , in which helical tunnels were used for the first time . From 1872 to 1875 he took a leave of absence in order to be able to work as a senior engineer in the construction of the north ramp of the Gotthard Railway , where a roundabout tunnel and a double loop were built according to his plans at Wassen . In 1875 he returned to the Baden state service as head of the technical department of the General Directorate of the State Railways . His last project was the Höllentalbahn from 1884 to 1887, the completion of which he did not live to see.

Gerwig was also politically active for almost thirty years. Between 1855 and 1878, with several years of interruption, he sat as a national liberal member of parliament for the constituencies of Wolfach -Furtwangen and Pforzheim in the second chamber of the Baden state parliament . In a replacement election at the end of 1875 and again in 1877, 1878 and 1881 he was elected to the Reichstag in the constituency of Donaueschingen -Villingen . There he emerged as a specialist in infrastructure issues, for example the correction of the Rhine and, above all, rail operations, and advocated protective tariffs for the watch industry. As a member of the building commission, he worked to ensure that Paul Wallot's design for the new Reichstag building was implemented from 1884. In the elections of autumn 1884, Gerwig decided not to run again.

Robert Gerwig died on December 6, 1885 in Karlsruhe from a stroke . His grave is there in the courtyard of the main cemetery (crypt no.86). 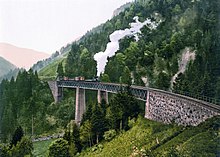 Viaduct over the Ravennaschlucht around 1900

As director of the watchmaking school in Furtwangen, Gerwig helped the Black Forest “Bahnhäusleuhr” break through, and from 1852 laid the foundation for the German watch museum in Furtwangen with a watch collection .

Memorial stone in Triberg in the Black Forest

In 1859 he was awarded the Knight's Cross 1st Class of the Zähringer Lion Order, followed by its Commander's Cross in 1872 . In addition, six orders from other countries adorned his chest. Gerwig was made an extraordinary member of the Royal Prussian Academy of Building in Berlin in 1880 .

Friends and colleagues donated a memorial to him in Triberg in the Black Forest , which was unveiled in autumn 1889. Almost a century later, in 1987, the Achern sculptor Walter Gerteis (1921–1999) erected a further monument to him in the form of the Karlsruhe Gerwig Fountain.

Robert Gerwig became an honorary citizen of the city of Radolfzell on Lake Constance . The Gerwig-Platz in front of the Freiburg Wiehre train station was named after him, as was Robert-Gerwig-Platz in Furtwangen , where the clock museum he founded is located. Also in Furtwangen, the vocational schools that emerged from his watchmaking school were named Robert-Gerwig-School. The commercial schools in Singen (Hohentwiel) , the grammar school in Hausach and the elementary and technical secondary school in St. Georgen in the Black Forest also bear his name.

In 2009 and 2010, Gerwig - the musical of the Black Forest Railway was performed in Triberg . The authors of the music and text are the journalist Peter Bruker and his friend, the musician and educator Rolf Langenbach .

In the computer game " Railroad Tycoon II" he is one of the characters that can be selected by the player.