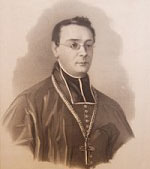 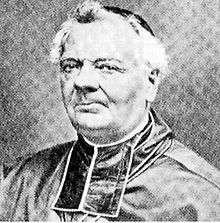 Blum was born the son of a shoemaker in Geisenheim and received on 28 March 1832 after his in Bonn and Würzburg completed studying the priesthood . He became cathedral chaplain and later taught at the Limburg seminary . After a short activity as a pastor in Oberbruch, he was in 1842 by Pope Gregory XVI. appointed Bishop of Limburg . He was elected on January 20 and received on October 2 by Johann Leonhard Pfaff , Bishop of Fulda , the episcopal ordination ; Co- consecrators were Peter Leopold Kaiser , Bishop of Mainz , and Georg Anton von Stahl , Bishop of Würzburg .

A special focus of his long tenure as bishop was the improvement of medical care for the population. This was a clear identity of interests with the Duchy of Nassau and its exemplary health system. Blum promoted the establishment, settlement and expansion of nursing communities, exemplified by the poor servants of Jesus Christ (ADJC; "Dernbacher Sisters"). They developed into the main congregation of the young diocese. Taking up the educational impetus of Blum and the century, a medically-led, nursing training (also far from bed, i.e. theoretical teaching) took place at an early stage, instead of the usual patient maintenance. In addition, all sisters went through a "basic training" and, depending on their use, training and further education up to and including teacher training. Blum's work and his solidarity with the founder of the community Maria Katharina Kasper created a community with a model character. Their work was state-of-the-art, which was documented in the rapid expansion of the community - also against competitors. Blum promoted its expansion in other dioceses, abroad and even as far as the USA . Against the background of the developing dissent between religions and the state, in which Blum was heavily involved, the nursing and teaching activities of his specially funded community knew no religious barriers. For example, Blum promoted the settlement of a Catholic girls' school of the ADJC in Montabaur , according to the door sign, whose women were Catholic, Protestant and Jewish, and also led to a teacher training institute. An active collaborator of the bishop in the development of the order of sisters was (temporarily) the later Limburg cathedral capitular and Frankfurt city pastor Ernst Franz August Münzenberger (1833–1890), who also set his own priorities.

By virtue of his office, Peter Joseph Blum had been a member of the first chamber of the estates of the Duchy of Nassau since November 1851 . However, he did not take part in the parliamentary sessions, but was represented. His representatives were: Philipp Schütz (1852); Johann Baptist Diehl (1854 and 1865–1866) and Wilhelm Jost (1862–1863).

Document as a commitment to Bishop Blum of the "Seven Boys of Obertiefenbach" from June 16, 1874

Blum repeatedly found himself in controversies and disputes with the Nassau and later the Prussian state. The climax here was the Prussian-dominated Kulturkampf from 1871 onwards. H. after defeating France . Under Bismarck's leadership, the interests of the Catholic Church and the Prussian state were defined as opposites. For his critical stance he received a lot of sympathy and solidarity from the church people, for example through the confession in the document of the "Seven Boys of Obertiefenbach " of June 16, 1874. On June 13, 1877 he was ruled by the state court for church affairs for alleged exceedance the May Law deposed. After Blum had settled his absence obligations, he traveled to the Dernbach sisters in Dernbach in full regalia and his own coach . After spending the night there with deliberations, he changed to “normal priestly costume” and drove to Koblenz in a monastery carriage . From there he fled into exile in Bohemia , where he found refuge in the Haid Castle of the Catholic Prince Karl zu Löwenstein . There was lively communication between the Diocese of Limburg and Haid Castle, and messengers traveled there with letters. But it wasn't until December 1883, a year before his death, that he was able to return to Limburg. The bishop died in Limburg on December 30, 1884, in poor health and almost blind.

Blum is considered one of the most important personalities of the Catholic Church in the Kulturkampf. He was buried in Limburg Cathedral . His tomb comes from the architect Max Meckel , the central composition being based on a representation of the bishop in the triptych by Peter Joseph Molitor in the ADJC's motherhouse in Dernbach. The same photographic view of the bishop was not only used as a sketch for the above. Used oil painting, but also later adorned his picture of the dead.

Motif: Tomb of Peter Joseph Blum (there is also a memorial for the first two bishops Jakob Brand and Johann Wilhelm Bausch ).

If you want to help, the instructions explain how it works.
BW