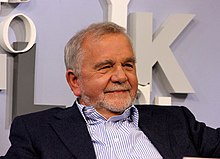 Safranski grew up under the formative influence of his pietistic grandmother. His parents were non-denominational , but, since they were mostly absent due to work, they formed such a small counterbalance that Safranski wanted to study theology after attending the humanistic high school in Rottweil . However, after the diaconal six months previously completed , he decided against it. Instead, from 1965 he studied philosophy (among others with Theodor W. Adorno ), German , history and art history at the universities of Frankfurt am Main and Berlin . In 1970 he was one of the founding members of the Maoist- oriented Communist Party of Germany / structural organization (KPD / AO). From 1972 to 1977 he worked at the Free University of Berlin as a research assistant in the department of German studies and received his doctorate in 1976 with the thesis Studies on the Development of Workers' Literature in the Federal Republic .

From 1977 Safranski worked as co-editor and editor of the Berliner Hefte . From 1977 to 1982 he worked as a lecturer in adult education and in 1987 settled in Berlin as a freelance writer . He was best known for his monographs on Friedrich Schiller , ETA Hoffmann , Arthur Schopenhauer , Friedrich Nietzsche , Johann Wolfgang von Goethe and Martin Heidegger . He has been a member of the PEN Center Germany since 1994 and of the German Academy for Language and Poetry in Darmstadt since 2001 . From 2002 to 2012 he hosted the Philosophical Quartet on ZDF together with Peter Sloterdijk . The Academic Senate of the Free University of Berlin appointed Rüdiger Safranski as honorary professor in the Department of Philosophy and Humanities in the summer of 2012 .

From September 2012 to May 2014, Safranski took part in the Swiss TV program Literaturclub , hosted by Stefan Zweifel , together with Elke Heidenreich and Hildegard Elisabeth Keller . 2015 he was invited to the speech at the opening of the Salzburg Festival to keep.

At the end of 2015, Safranski distanced himself from German refugee policy and, in particular, from the “ welcoming culture ” that was “only fun for a while”. He spoke of "soon several million" refugees and explained that the next wave of refugees from Afghanistan is already coming. He told the world : "Politicians have made the decision to flood Germany". The publicist Georg Seeßlen accused him - and the like-minded Peter Sloterdijk - of taking up an anti-modern discourse on the political right and contributing to the fact that a rational discussion was no longer possible. Sexually interpretable metaphors within the discussion about refugees, for example that of the “flood”, have been adequately analyzed and Safranski cannot be assumed to be ignorant.

In 2005, Rüdiger Safranski and his longtime partner Gisela Nicklaus married. He has lived in Badenweiler since 2009 .