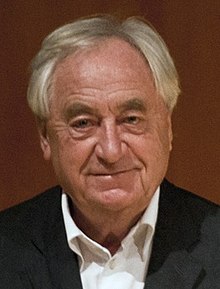 Cornelis Johannes Jacobus Maria (Cees) Nooteboom [ seːs noːtəboːm ] (born July 31, 1933 in The Hague ) is a Dutch writer. His work includes novels , short stories , travelogues and poems ; he was also active as a journalist and literary critic . In the Netherlands, his debut novel Philip and the others from 1955 was already widely received and awarded the Anne Frank Prize ; However, it was only the novel Rituale from 1980 that attracted international attention . In Germany, the author has reached a wide audience since his novella The following story was published in 1991.

Nooteboom has received numerous prizes and awards, including two honorary doctorates, as well as the 2009 Prijs der Nederlandse Letteren , the most important in the Dutch language. His books have been translated into more than 15 languages.

Nooteboom lost his father in early 1945 in a misdirected British bombing raid on the Bezuidenhout district of The Hague ; his parents had been divorced since 1943. His mother remarried in 1948; At the instigation of his strictly Catholic stepfather, Nooteboom then attended monastery schools run by Franciscans and Augustinians . According to his own information, he was drawn to the ceremony there , but not to the dogmatics , and he left school early.

From 1950 Nooteboom worked at a bank in Hilversum and took odd jobs. In 1953 he began extensive travels through Europe , often as a hitchhiker . These journeys inspired his first novel Philip en de others (1955; Eng: Paradise is next door , 1958); he was awarded the Anne Frank Prize (1957) and accepted into the school canon , thus making his author immediately known in the Netherlands. In Germany, the novel only reached a wide audience in the new translation Philip and the others (2003) by Helga van Beuningen .

In 1957 Nooteboom hired on a ship to the Caribbean as an ordinary seaman , in order to ask the father of his bride Fanny Lichtveld for her hand in Suriname . The two married against his will, but separated again in 1964. The experiences of this trip were reflected in the stories of the band De ranfde gevangene (1958; German: The prisoner in love. Tropical stories , 2006).

Nooteboom's second novel, De Ridder is gestorven (1963; Eng .: The knight died , 1996), was 17 years his last. During this time, mainly numerous travel reports became known. Nooteboom owes his reputation as a travel writer to this, although he sees himself primarily as a poet .

The first volume of poetry appeared as early as 1956 ( De doden zoeken een huis. Poems ), others a few years later . A first selection appeared in Germany in 1964 ( Organon-Poesie , translated by Heinrich G. Schneeweiß). Nooteboom also translated poems into Dutch and wrote lyrics, a. a. for Herman van Veen and Liesbeth List , with whom he lived for a while.

Attempts to write for the theater were largely unsuccessful.

Activity as a journalist

Nooteboom worked a. a. for the Dutch magazine Elsevier (1957–60) and the daily newspaper De Volkskrant (1961–68). In 1967 he became an editor at Avenue magazine ; he was initially responsible for the travel department, from 1977 also for poetry .

Breakthrough as a narrator

The novel Rituelen (1980; German: Rituals , 1985) helped Nooteboom to become internationally known. He received the Mobil Oil Company's 1982 Pegasus Literature Prize , which funded an English translation and translated into other languages. In 1989 Herbert Curiel made a film based on this model. After his carefree first work, Nooteboom had reflected a lot on the process of writing and the relationship between reality and reality in various literary genres, which contributed to the much more distant and ironic style of rituals compared to earlier works . In the short story Een lied van schijn en wezen (1981; German: A song of appearance and being , 1989) and the short novel In Nederland (1984, German: In the Dutch mountains , 1987), Nooteboom made these reflections an explicit topic . In both cases he tells both a story - in the case of In Nederland a modified form of the art fairy tale The Snow Queen - and the story of its fictional author, addressing problems of the writing process and the author's position on the work.

The novella Het volgende verhaal (1991; German: The following story ) brought the author, after an enthusiastic review by Marcel Reich-Ranicki, the commercial breakthrough in Germany. The novel Allerzielen (1998; German: Allerseelen , 1999) also achieved worldwide distribution, but received special attention in Germany, as the city of Berlin is the setting and its history as a divided city is one of its central motifs. The author is now being received more intensively in Germany than in his home country; It is significant that the German edition of the Nootebooms Hotel collection (2000) appeared before the Dutch one.

Nooteboom's 70th birthday on July 31, 2003 was an occasion in Germany to take a closer look at the author and work. Since then, Suhrkamp Verlag has published a nine-volume collection of works in which some texts are available in German translation for the first time.

The documentary Hotel Nooteboom - A Picture Journey into the Land of Words (2003) by Heinz Peter Schwerfel combines interviews with Nooteboom and some of his friends (including Connie Palmen and Rüdiger Safranski ) with landscape shots and readings from various books by the author.

Cees Nooteboom now lives with his wife Simone Sassen in Amsterdam and Menorca. On the Balearic Island as well as on Schiermonnikoog in the Netherlands, the poems of his poetry volume Mönchsauge (Suhrkamp 2018) almost “came about by themselves”.

Abroad, especially in Germany, Nooteboom is considered to be more important in contemporary Dutch literature than in the Netherlands itself. Among other things, this was expressed in the fact that Nooteboom was in Germany in the early 1990s by critics such as Marcel Reich-Ranicki and Rüdiger Safranski for the Nobel Prize for Literature , while it is only mentioned in subordinate clauses in the standard work Nederlandse Literatuur, een geschiedenis zur Dutch literature, which was written at the same time . In addition, Dutch literary criticism often speaks of the “big three” of post-war literature, including Willem Frederik Hermans , Harry Mulisch and Gerard Reve , but not Nooteboom. Ralf Grüttemeier takes the view that this cannot be explained either by a fundamental overvaluation of Nooteboom's texts in Germany or by an undervaluation in his home country. Rather, it plays a role that Nooteboom has always been an outsider in the literature business in his home country, while the Suhrkamp publishing house has made him known to a wide audience in Germany through numerous readings, among other things.

Collections of essays and reports

Hardcover of the collected works at Suhrkamp, ​​edited by Susanne Schabe