Party congress of the SED

5th party congress of the SED in the Werner-Seelenbinder-Halle in Berlin, 1958

Opening of the XI. Congress of 1986 in the Palace of the Republic 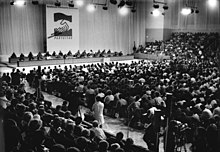 SED special party conference on December 8, 1989 in the Dynamo sports hall in Berlin-Hohenschönhausen

The party congresses of the SED were prepared and staged to a great extent by the party leadership . The delegates of the party congress were selected and invited by the Central Committee of the SED . Care was taken to ensure that the mass organizations had an appropriate number of members and that a proportion of women and young people as well as "exemplary workers" were selected. The candidates selected by the Central Committee were then ostensibly elected by the local party apparatus in delegates' conferences.

All contributions to the discussion at the party congress had to be submitted to the Central Committee for approval beforehand. Greetings from other mass organizations, in particular from the Thälmann pioneers and the youth association FDJ , the official “fight reserve of the party” , were part of the party congress direction. These younger speakers were allowed to loosen up the speeches, which often lasted for hours, with harmless joking remarks in their speeches. There was also a fighting address from comrades from the armed organs and international greetings from the fraternal socialist parties, whose chairmen or general secretaries were mostly represented by delegations in the presidium . In addition to the official part, there were long contributions to the discussion published in Neues Deutschland , as well as moderately critical discussions in the working groups during the party congress. On the occasion of the party congress, the comrades made “voluntary” contributions to over-fulfillment of the plan or particularly important party convention projects.

A special feature of every party congress was the non-stop writing down of the delegates, although all the official speeches on the next day were printed for pages in the party's central organ Neues Deutschland . Applause was precisely recorded in the wording, for example "long-lasting stormy applause, interrupted by cheers for the party and government of the GDR" . As a party convention gift, the delegates usually received a gold-plated watch that identified its wearer as an important person in the GDR.

In April 1946 an annual rotation of the party congresses was set at the founding party congress of the SED . The second party congress actually took place in 1947, but the third did not take place until 1950. Thereafter, the party congresses were held every four years (except between the fifth and sixth party congresses) and from 1971 every five years. The last regular party congress was the XI. Party Congress 1986. In the course of increasing economic difficulties, it was decided in 1989 that the XII. Party congress to be brought forward from 1991 to 1990 (15-19 May). As a result of the political change and peaceful revolution in the GDR in 1989, it no longer took place. Instead, there was a special SED party conference on December 8 and 9, 1989, where the SED acknowledged its new role and adopted the name SED / PDS.

The plenary sessions of the Central Committee took place between the party congresses . Their counting began anew after each party congress.

For the time after the renaming in 1989 see the list of party congresses of the PDS and the Left Party until 2007 .