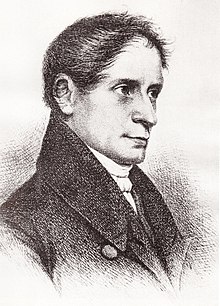 The Dürande Castle is a novella by Joseph von Eichendorff , which, written in the winter of 1835/1836, was published for the autumn fair in 1836 in the paperback "Urania" by FA Brockhaus Verlag in Leipzig.

At the beginning of the French Revolution, the hunter Renald revolted against the count's rule and died in the process.

Castle Dürande near Marseille around 1789 : After the young hunter Renald Dübois had to assume that his sister Gabriele had run away with the young Count Hippolyt von Dürande to Paris, he went to his master, the old Count Dürande, and asked “respectfully for a short vacation a trip to Paris ”. The old gentleman laughingly allows the trip because he knows the reason. He just asks his hunter not to make it too bad.

Arriving in Paris, Renald confronts the young Count Dürande. The nobleman supposedly knows nothing about Gabriele. Renald believes that the sister is being held against her will in the Count's Paris palace and only wants his rights. The hunter penetrated almost to the king . Count Dürande - following the ruler's entourage - has the intrusive Renald locked up in the madhouse for several months. The inmate can escape and makes his way to his native Provence . His position at home has meanwhile been taken by another hunter. The revolutionary turmoil is also growing in the south of France and advancing from castle to castle. As a precaution, old Count Dürande had all the powder gathered in the corner tower of his castle. The old man dies before the storm at Dürande Castle. The son hurries over from Paris. The "gang" penetrates the castle. Gabriele, meanwhile back at Dürande Castle, has dressed like the young count to enable her lover to escape from the castle. Both are hit by deadly bullets.

Renald, who as the attacker has the young lord of the castle and, to his own extreme horror, also the beloved sister Gabriele on his conscience, learns the truth from the faithful, dying castle warden Nicolo. The sister had run after the young count and had “earned” herself as a gardener's boy in the Paris palace. For his part, the young count also “loved Gabriele to death”. Renald's hair turns gray. The hunter voluntarily follows the lovers to their deaths: He sets the Dürande Castle on "all four corners". The flames reach the corner tower. With a "terrible lightning bolt" the walls collapse.

According to Goethe, a prose text should not preach morality. Eichendorff closes his novella with the appeal: "But be careful not to wake the wild animal in your chest so that it does not suddenly break out and tear yourself apart." Thus he violates this maxim.

The novella shows the class differences in pre-revolutionary France based on the private conflict between a nobleman, the young Count Dürande on the one hand, and his opponent Renald or his sister Gabriele on the other. The love between Count Dürande and the bourgeois Gabriele is inappropriate and therefore condemned to failure in its social reality from the start. As a nobleman, Eichendorff is on the side of the young Count Dürande. The opposing party, i.e. the attackers on the castle, are - with the exception of Renald - plundering "rabble". Nevertheless, the novella is inherent in some criticism of the nobility. The person of the old Count Dürande stands for that part of the nobility that clings to outdated aristocratic principles and has lost all relationship with the people. According to Manfred Häckel, his death on the eve of the revolutionary conflict would be "symbolic [for] the atonement [...] of his [r] guilt, which at the same time shows the failure of the traditional nobility."

The figure of the young count was drawn with sympathy by the author. He is distinguished by a chivalrous demeanor and has not lost touch with the common people. Nonetheless, he also sees himself in a superior position to the people and as a supplicant towards him, for example when he says: “I have nothing to do with the people, I did nothing but good for them, if they want something better, they should honestly demand it, I would give it gladly to them, but I don't allow myself a hand's breadth of my old land; Defiance against defiance! ” At this point the landlord's son Eichendorff can identify with the young count and his own aristocratic attitude becomes apparent.

For the young Count and Gabriele, crossing the class boundaries is not a problem personally. But in the absolutist society in which they live, breaking the barriers of class is not possible. The union of the two lovers does not take place until they die together.

The Leipzig bookseller FA Brockhaus turned to Eichendorff on October 19, 1835 with the request to contribute a contribution to Brockhausschen Taschenbuch, if "an inexpensive material for editing in the form of a novella [offered] whose publication in a paperback appears appropriate". It would be very pleasant for him to know a contribution by Eichendorff in his "Urania", "which gave me the honor of a business relationship with your high-born".

Eichendorff agreed, so that “Das Schloß Dürande” could be found in the “Urania. Paperback for the year 1837 ”.

In 2018 the concert performance of a revision of the opera took place, in which the compromised work and especially the difficulties of the libretto by Hermann Burte were "decontaminated" by a national fund project at the Bern University of the Arts . The first production of this new version was scheduled for 2019 in the Meiningen State Theater .