Carl Ludwig Ritter von Blume (born June 9, 1796 in Braunschweig , † February 3, 1862 in Leiden ) was a German-Dutch botanist . His merits lie mainly in the research and classification of the Indonesian (former term: "East Indian") flora. Its botanical author abbreviation is " flower "; earlier the abbreviation " Bl. " was also used. 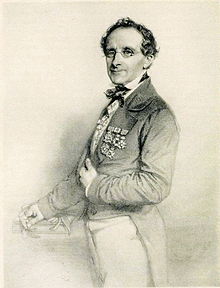 Blume was born in Braunschweig as the son of a businessman. He studied at the University of Leiden . In 1818 he went to Jakarta as a naturalist on behalf of his teacher and patron Sebald Justinus Brugmans (1763-1819) , which was then called Batavia. He lived in the Sunda Islands until 1827 and collected plants. When he returned home, he brought over 3,000 species of plants with him. After his return, Blume was ennobled; he was appointed councilor and knight of the order of the Dutch lion .

Blume became professor of natural history at the University of Leiden and director of the Rijksherbarium in Leiden.

Blume made the following contribution to his hometown Braunschweig: The head of Ferdinand von Schill , which has been inlaid in alcohol in the anatomical museum of the University of Leiden since 1809, was brought to Braunschweig in an urn in 1837 through his intercession to Prince Friedrich of the Netherlands , where fourteen of his comrades in combat were already there had been buried. In the same year a Schill memorial was erected in Braunschweig .

Blume published numerous scientific writings with illustrations, which were created by Johann Arckenhausen , among others . He was a member of the editorial team of the botanical journal Flore des serres et des jardins de l'Europe published by Louis van Houtte .