The title of this article is ambiguous. Further meanings are listed under Pathé (disambiguation) . 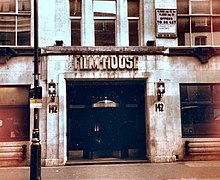 Pathé shellac record in the Phonomuseum "Old School" (50 cm diameter, Pathé Concert Record (1909) no 5860, is played from the inside out)

Pathé or Pathé Frères is the name of various companies in the music and film industry. Pathé also has a record company, see Pathé Records .

The company was founded on September 28, 1896 in Paris as Société Pathé Frères by Charles, Émile, Théophile and Jacques Pathé. The four brothers put together 8,000 francs each from their savings to sell phonographic equipment with the company . Production of our own rollers began as early as 1896, but production was discontinued in 1906 in favor of the record, and our own special formats were also developed. During the first half of the 20th century, Pathé became the largest film equipment and production company in the world and one of the leading record labels.

The driving force behind the company from its beginnings to 1929 was Charles Pathé , who had helped open a roller store in 1894 and later opened a record factory in the Parisian suburb of Chatou . He recognized the potential of the new branch of the entertainment industry early on: film.

From the beginning until 1929

After Pathé had obtained the rights to patents from the Lumière brothers in 1902 , they set about developing a studio camera and putting together an inventory of film equipment. Their technically advanced equipment, their aggressive merchandising and an efficient sales system resulted in them gaining a high market share on the world market. In 1902 the company expanded to Great Britain. In London they founded a production company and a cinema chain. In 1904 a subsidiary was founded in Vienna. For a long time, until the founding of the first Austrian film companies, this company had the sole right to film the emperor . In 1909 Pathé had built over 200 cinemas in France and Belgium . The following year they had company branches in Madrid , Moscow , Rome , New York , Australia and Japan .

In February 1929, Bernard Natan was more optimistic about the future success of the sound film than the other major film studios and producers in France. He took over the Pathé studio under the name Pathé-Natan.

The new studio produced 70 feature films from 1929 to 1935. The directors who worked for Pathé-Natan included, among others. Marcel L'Herbier , Jacques de Baroncelli , René Clair , Jean Grémillon , Jacques Prévert as well as Maurice and Jacques Tourneur . Among the actors, Jean Gabin and Renée Saint-Cyr deserve special mention. In addition, the distribution of the French-language versions of numerous foreign productions - such as B. Mickey Mouse - ensured. The company also acquired shares in a radio station and some early patents in cinemascope and television technology.

As a late consequence of the complicated Pathé takeover, but above all as a victim of a xenophobic and anti-Semitic campaign, Natan ran into financial difficulties and had to declare her insolvency in 1936. A distinction must be made between cinema operations and film production, which had been profitable until the end (the cinema division should also be able to settle its liabilities later, including interest on arrears). Bernard Natan then worked in the Paramount studios in Saint-Maurice.

In December 1938, Natan was arrested. In 1939 and again in 1941 he was convicted of fraud and served a prison term. He was still there when the Germans took Paris in 1940. After his release in 1942, after his French citizenship was withdrawn, he was handed over to the German occupiers and deported to Auschwitz on September 25, 1942 , where he is said to have perished a few weeks later.

Unlike his business partner and later adversary Charles Pathé , Natan had no way of retrospectively presenting his view of things.

After it was determined that the company Pathé-Natan had no liabilities, the Société nouvelle Pathé Cinéma was founded on the basis of the remaining assets .

In 1990 the French group Chargeurs , owned by Jérôme Seydoux , acquired Pathé. Due to the deregulation of the French telecommunications, entertainment and media market in 1990, the company was able to merge with Vivendi in June of the same year . Vivendi retained some of the Pathé holdings in Great Britain after the merger. All other rights went to Fournier SA , owned by the Seydoux family , which subsequently renamed Pathé.

In 2011, Pathé had the following business areas:

Outside France, Pathé releases its films on VHS or DVD. To mark the 20th anniversary of the company's realignment, a 21 DVD publication with 20 films from the period 1990-2010 with a 500-page booklet was published.