Entrance ticket (not torn off) for the Berchtesgaden spa cinema

Entrance ticket to the musical " Hair " 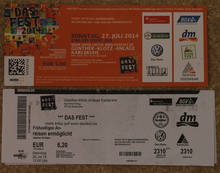 Tickets for the same event can look different

The admission ticket (also called ticket , in Switzerland ticket ) is a bearer paper that certifies the right to use a service , such as to attend an event . The entitlement certificate with which the holder can use public transport is known as a ticket .

The admission ticket serves as authorization for the holder to access an event or service. Furthermore, the ticket is a notarizing document for the contract that is concluded between the service provider and the cardholder, such as a so-called event visit contract. The contract becomes binding because the organizer or the advance booking office, acting as the organizer's representative, hands over a ticket to the visitor. It is agreed that ownership of the admission ticket should be transferred in accordance with Section 929 of the German Civil Code (cf. VI. Legal) and that there are claims against the organizer for delivery or performance of the event.

This is about a ticket that allows multiple use of services or events, a so-called subscription . Often the visitor receives a discount compared to a single booking of the services. In most cases, visitors to events with a subscription card are entitled to the seat indicated on the ticket for the entire subscription. In contrast to a season ticket, a subscription only entitles you to visit a certain number of events, or - as with theater or concert subscriptions - to several previously specified performances.

A special type of season ticket is the away season ticket. While the normal season ticket allows you to visit any number of events in a season at the same venue, especially in sports, high-class clubs with many fans who love to travel also issue so-called season tickets. A separate single ticket is reserved and given to the preferred team for each away game - unification on a single ticket as with the season ticket is not possible due to the different admission systems at the various venues.

In addition to admission to an event, this card also gives access to the area behind the stage, the so-called backstage area .

The season ticket, obsolete and also passepartout in Switzerland , entitles the holder to visit performances that are performed by one organizer as often as she likes , usually during a season; the venues can differ or organized in a single venue by different organizers or a combination same venue and same organizer. A season ticket for transport is z. B. an annual pass.

This is an admission ticket or a single ticket that entitles you to visit an event once or use a service once (such as a cinema ticket). After the card is validated or at the end of the period of use, it becomes invalid. If an assigned seat is indicated on the ticket, it is called a seat card. A single return ticket is a return ticket.

In this case, the note “free choice of seats” can usually be found on the event card. At the same time, it is stated that the card is only used for admission and loses its validity when you leave the site / location.

The ticket is equivalent to a single ticket and entitles the holder to travel by air.

A free ticket is issued by the organizer free of charge, i. that is, no fees or costs are charged.

With a group card, a number of people who have previously been specified with a maximum value can use a service on the specified date.

The combined ticket consists of an entry ticket with integrated authorization to use local public transport in order to be able to attend the performance. In many cases it is also a combination of admission ticket and gastronomic service.

This type of admission ticket entitles the holder to make multiple use of a service. In contrast to the subscription card, the date is not precisely set so that the holder can decide spontaneously when to use his card. Furthermore, the number of times it can be used is also printed on this card.

The day ticket is a variant of the season ticket, it entitles the holder to use a service that is fixed on a date for the whole day. This depends, for example, on the opening times.

The VIP card is only available for special guests at events. This entitles the owner to access a separate area, the so-called VIP area. At many events, VIP tickets can be purchased by anyone, but at a much higher price than regular entry tickets. Some VIP cards also contain additional services such as meals.

The season ticket entitles the holder to use a service as often as required for a specified period of time. The period varies depending on the location and service.

A customer buys a ticket for a specific performance, either in advance sales or at the box office. At the entrance, the visitor presents his ticket for inspection. The card indicates whether he is entitled to attend the performance. The admission ticket is a qualifying bearer paper with which the cardholder can prove his or her right.

Since the admission ticket is a bearer paper, it is transferable and can therefore be used by anyone who is in possession of this paper. This means that the buyer does not necessarily have to be the visitor. Unless it is contractually stipulated in the contractual terms and conditions before the purchase that the ticket is personal. In this case, the ticket loses its transferability. Furthermore, a photo ID must be presented during an inspection so that it can be proven that the card holder is authorized to attend the event.

By definition, the admission ticket itself is not regulated in the Civil Code. However, the admission ticket is a so-called small bearer paper , according to § 807 BGB . This paragraph refers to Section 793, Paragraph 1, Section 794 , Section 796 and Section 797 of the German Civil Code (BGB), which regulate the so-called bond to the holder. Ownership of the ticket is also transferred, in accordance with Section 929 ff. BGB, and ownership, as the exhibitor, in this case the organizer, is entitled to access the event by means of a document (admission ticket) to the purchaser (visitor ) transmits. The parties agree on the justification of the securitized claim under the law of obligations. For the event visit contract, this means that the organizer (usually the advance booking office as its representative) hands over the ticket to the visitor and both agree that ownership is to be transferred ( Section 929 BGB) and that the visitor is making a claim against the organizer justify the delivery of the event. The event visit contract is a contract for work and services with a tenancy effect with the result: The organizer owes the success, the performance.

The tickets can be purchased either at the box office or in advance. Ticket sales systems are mostly used for advance sales. External providers sell admission tickets via advance booking offices or ticket hotlines . In the case of sales via the Internet, sales are carried out directly via the organizer, such as cinema chains or via portals that encompass organizer.

If the demand for tickets for particularly popular events exceeds the number of available seats, this usually automatically triggers a so-called second ticket market (popularly also known as the black market , although this concerns the so-called gray market ). This particularly affects football clubs and concert organizers, but also low-cost airlines. A ticket reseller branch is increasingly emerging who specialize in reselling tickets to end customers outside of the official sales channels. This usually happens without the consent of the organizers, who often state in the terms and conditions that tickets that are resold at a price above their face value lose their validity. The revenue from ticket reselling is the maximum price offered by the end customer minus the printed face value. Profit margins of several thousand percent are not uncommon. The largest trading platforms for ticket reselling are Viagogo, Ticketbis, eBay, seatwave and other Internet classifieds portals.

Manufacturers of tickets are or were z. B.