ENSO has three phases: El Niño is the best known. There is also the "normal" state of the ocean and atmosphere as well as La Niña , which is the counterpart to El Niño, and is therefore often referred to as "Anti-El-Niño".

While ENSO operates in the tropical Pacific area, there are many teleconnections that appear to be related to ENSO. The variabilities of the Indian monsoons or the hurricane frequency in Central and North America are closely associated with ENSO.

Continuous measurements in the area of ​​the mesopause show that the variabilities of the ENSO extend to great heights and can thus be transported far to the south and north.

The term ENSO (El Niño - Southern Oscillation) consists on the one hand of the term El Niño  ( Spanish  for "the boy, the child", here specifically: "the Christ child  "), the occurrence of unusual, non-cyclical, changed  currents  and the warm sea surface temperatures associated with it gives it a memorable name. The name is derived from the time of occurrence, usually around  Christmas time . It comes from  Peruvian  fishermen, who get to feel the effect economically because of the lack of schools of fish. The second part of the designation refers to the oceanographic - meteorological  conditions described by the Southern Oscillation (these indices can use both sea surface temperature and air pressure as a basis for measurement) in the entire equatorial Pacific, which are divided into positive (El Niño) and negative phases (La Niña) let distinguish.

The three main phases of ENSO

In normal years there is a zonal temperature gradient along the tropical Pacific; d. H. in the west off the coast of Indonesia , the temperature of the sea surface is around 28 ° C, significantly higher than in the east off the coast of South America . Here the water temperature is around 24 ° C. The reason for the lower water temperature before South America's coast is the upwelling , which there by Ekman transport occurs due to the equatorial easterly winds - a transport of cool deep water to the surface (see also upwelling ). These upwelling areas can be found off the coast of Peru and along the equator as far as the central Pacific. They form part of the cool ocean currents, i.e. H. the Humboldt Current and the South Pacific Current . Thanks to the many nutrients in the deep water, there is a rich food supply for high fish stocks off the coast in the upwelling areas. As a result of the strong equatorial east winds, the sea level on the west coast of South America is half a meter lower than on the east coast of Australia or Indonesia, where the “missing” water off the coast of Peru is being pushed. This difference in sea level triggers a backward deep current to the east. This fact is the starting point for the idea that the sea level difference produced could become so great that it cannot be sustained by the winds and that a near-surface mass balance to the east would occur. 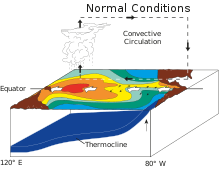 The high water temperature in the western Pacific ensures a large-scale convergence of humid air. The air rises above Indonesia in a low pressure area and forms clouds that bring rain almost every day. The ascended air becomes both meridional, i.e. H. to the north and south, as well as zonal, d. H. along the equator, transported away. Meridional transport is referred to as Hadley's circulation and zonal transport is referred to as Walker circulation . In the high pressure areas of the subtropical high pressure belt and in the high pressure area over the eastern Pacific, the air masses sink. Since such subsidence processes are associated with cloud dissolution, very little rain falls in these areas. The air then flows back towards the Indonesian low. These winches are also known as the Passate .

But the trade winds not only cause the swelling of cool deep water, but also a raising of the thermocline , a thermocline because of discontinuum the water temperature. The processes that lead to this elevation are brought about by the Ekman spiral .

The circulation over the Pacific is subject to seasonal fluctuations. In March and April the Walker circulation is poorly developed, while the Hadley circulation is strong. In September it is the other way round. Just like the circulation, the areas with pronounced convergence, i. H. with heavy cloud formation and frequent precipitation , a seasonal migration. In summer the South Pacific Convergence Zone (SPCZ) is only weakly developed, but the Innertropical Convergence Zone (ITCZ) is strongly developed over the entire length of the Pacific. Until the beginning of winter, the areas of heavy precipitation migrate southeast. The SPCZ becomes stronger, while the ITCZ ​​weakens. From April these areas migrate back northwest, while the ITCZ ​​gains strength and the SPCZ weakens. 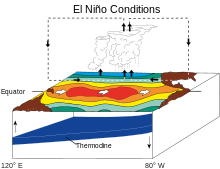 El Niño phase. The sinking of the thermoclines causes a warming of the surface water off the coast of South America in the form of a so-called warm water tongue.

In El Niño years there is a break in the seasonal cycle. Kelvin waves , which propagate eastward between the water surface and the thermocline, lower the thermocline in the eastern Pacific to such an extent that the upper water layer does not experience any mixing with the cool and nutrient-rich deep water. As a result, the water off the coast of Peru warms up and the plankton die off , causing the schools of fish to migrate.

The Innertropical Convergence Zone (ITCZ) is shifted further south by the warm water in the Eastern Pacific and the South Pacific Convergence Zone (SPCZ), of which the low pressure area over Indonesia is part, further to the west. This leads to a complete change in the circulation and the associated severe anomalies in precipitation, air pressure , wind direction and water temperature.

The rain over Indonesia does not occur, while the dry land in Peru is washed away by large amounts of rain, for example at the transition between 1997 and 1998. While the people of Indonesia are threatened by many forest fires, Peru has experienced a lot of flooding . Agriculture also suffers from these extreme weather conditions. 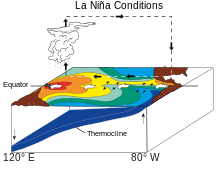 La Niña years mean a reinforcement of the normal phase of the ENSO. The low pressure area over Indonesia is particularly well developed. The trade winds are also strong and thus reinforce the Ekman spiral , which leads to a particularly strong cooling of the eastern Pacific. There is a lot of rain in Indonesia, while Peru is particularly dry.

In order to better determine the phase of the ENSO, in addition to the Southern Oscillation Index (which is determined by variations in air pressure at ground level), other indices such as the Oceanic Niño Index (ONI) of the NOAA and the index of the Japan Meteorological Agency (JMA) have been developed . Both refer to the water temperature of the near-surface layer ( SeaSurfaceTemperature ) in certain regions of the tropical Pacific. There is also the multivariate ENSO index, which takes into account several factors such as air pressure, water temperature, wind, air temperature and degree of cloudiness .

The changes in the Walker circulation and the shift in the jet stream result in changes in the weather both regionally and almost everywhere in the world.

Due to the drought and the heat, the area covered by rainforests and field plants is often affected by extreme crop collapses and forest fires.

Rest of the world - teleconnections

There are a few years in which droughts in Africa, but also climatic fluctuations in Europe (negative NAO, resulting in colder winters and hotter summers), resulted from an El Niño phase, but there is only evidence of an influence on these regions very limited possible.

It is assumed that the periodicity is mainly composed of two superimposed systems, with the atmosphere probably having a short-term periodicity of approx. 7 years, the ocean currents a 30-year period; one speaks here of warm and cold phases of the Pacific or the Pacific Decadal oscillation .

Based on the climate models available today, researchers assume that if the Walker circulation is weakened by climate change, the likelihood of positive and more positive ENSO events (El Niño phase) increases. The faster warming of the equatorial Pacific could lead to heavy precipitation in the area of ​​the equatorial east Pacific and to a shift of the Pacific innertropical convergence zone into equatorial areas. This corresponds to characteristics of an El Niño phase. A higher frequency of negative ENSO events (La Niña phases) is also expected. The reasons for this are seen as a continent that is warming more rapidly and a greater warming of the ocean surface temperature . Other researchers see El Niño phases as a higher probability of a higher number of tropical cyclones in the Pacific in the future.