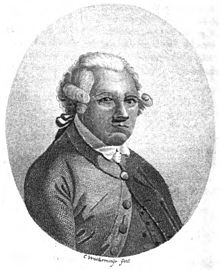 Dalrymple was historically significant above all in his role as a staunch advocate of the theory of a previously undiscovered southern continent . This thought already emerged with the Egyptian scholar Ptolemy - it was believed that this was necessary to bring the earth into equilibrium, otherwise the land masses in the northern hemisphere would dominate in a ratio of 8: 1. With this view, Dalrymple's rivalry developed with the navigator and cartographer James Cook , who was rather skeptical of the existence of such a continent.

Cook was sent by the Admiralty on his legendary three circumnavigations of the world. Among other things, he was commissioned to either prove or disprove the existence of such a continent. Dalrymple had initially hoped that the Admiralty would place him in charge of the expedition. But in the end Cook, who was far more experienced in seafaring, was preferred to the "desk scholar" Dalrymple.

Cook succeeded on one of his expeditions, probably as the first European ever to cross the Arctic Circle. Because of this, or because of his later circumnavigation of the Antarctic , it became obvious that there could be no more space for such a continent in higher southern latitudes. Antarctica could not be considered the south continent we were looking for, as it was assumed that the land was still in temperate, habitable latitudes. Dalrymple thus opened another chapter in the long history of scientific error.

Alexander Dalrymple, son of Sir James Dalrymple (Baron von Hailes) and Lady Christina Hamilton, spent his childhood in the family's country estate - New Hailes, near Edinburgh . He was the 7th of 16 children, outliving all others. The best known of his brothers was the legal scholar and historian Lord David Dalrymple . He received his first education in the school of David Young in Haddington.

His father died before Alexander was 14 and so he had to drop out of this education. His eldest brother continued to teach him for two years until he received the offer in 1752 to work as a clerk for the East India Company . In preparation, he completed courses in accounting and arithmetic at the Academy in Fort Hills.

After successfully passing the exams, he embarked for India in December of that year to reach Madras in mid-May of the following year. In accordance with his incomplete training, he was initially assigned to the camp administrator, but was promoted to the secretariat through the intercession of the governor, Lord Pigot, and the historian Orme. His two mentors personally taught him writing and accounting.

In the company's files, however, he came across clues about trade with the Philippines and the topic captivated him so much that he neglected his actual duties for the company, which fell out of favor with his mentors.

Nevertheless, he later managed to get to the Philippines. After the conquest of Manila during the British invasion of the Philippines , the English captured countless documents. Among other things, the reports of the Spanish explorer Luiz Váez de Torres , which had been kept secret by the Spanish for a century and a half. Alexander Dalrymple received the documents for translation and recognized the importance of Torres' discovery, the first to pass the Strait of the Sea between Australia and New Guinea , today's Torres Strait . He published Torres' discovery in his book on the explorations of the South Seas. He also helped negotiate a profitable trade agreement with the Sultan of the Sultanate of Sulu and Sabah .

In 1765 he returned to England to convince the authorities there of the chances of expanding trade in the Indian Ocean, but was less successful in this.

For many years in the service of the East India Company, he worked for the company as a hydrograph from 1779, and in 1792 he was appointed its first hydrograph. In 1795 the British Admiralty appointed him to the same position.

Compared to his role as a tragic figure in the history of science, his numerous contributions to cartography and ship safety are often overlooked: As the Kingdom of Great Britain became more and more involved in the naval war with Napoleonic France at the end of the 18th century, the need for systematic nautical maps skyrocketed and Dalrymple made a profound contribution to their standardization and cataloging. In ship safety, he created the basis for the Beaufort scale with his diagrams showing the distinguishing features of different wind strengths .

Incidentally, Dalrymple was the first to suggest the name Australia for what was then still known as New Holland .

In 1771 he became a Fellow of the Royal Society of London and in 1811 a corresponding member of the Académie des Sciences in Paris.

He is the namesake for Dalrymple Point , a headland on Joinville Island in Antarctica.