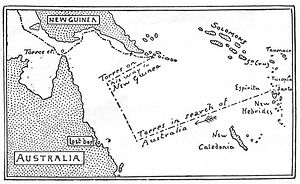 Map of the route along New Guinea and Northeast Australia

Luis Váez de Torres (* around 1565 , † after 1607 ) was a navigator and explorer in the Spanish service. Its origin is still unknown; he was either Portuguese or came from Galicia or Brittany .

In 1605 Torres commanded the second ship, the San Pedrico, in an expedition led by Pedro Fernández de Quirós , who inquired about the Pacific from Peru . The two discovered numerous islands. In October 1606 the ways of Torres and Quiros parted. Torres sailed on to the south coast of New Guinea , which he explored first. Another destination was the strait between New Guinea and the northern tip of Australia , which he also passed for the first time.

The Dutchman Willem Jansz , who sailed with the Duyfken in this area about six months off Torres , assumed that the Australian Cape York Peninsula , where he had landed, belonged to New Guinea. The strait was therefore in honor of Erstdurchseglers Torres Strait and the local Islands Torres Strait Islands called.

The reports collected from Torres were kept secret by the Spanish colonial rulers for a long time until the English captured them after the conquest of Manila in 1762. The Scottish geographer Alexander Dalrymple recognized the importance of the documents and published Torres 'discovery in his work An Account of the Discoveries made in the South Pacifick Ocean previous to 1764 , privately published in London in 1767. One reason why Torres' latest discoveries were initially few The fact that he most likely never returned to Peru and Spain after arriving in Manila on May 22, 1607 may have attracted attention. Torres may have died three years later.