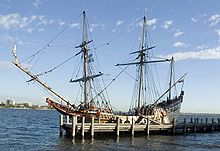 The replica of the Duyfken

Willem Jansz's route on the Duyfken 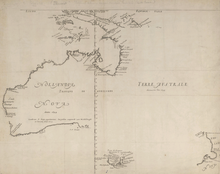 Melchisédech Thévenot's map of “New Holland” from 1663. The map is a copy of a work by Joan Blaeu from 1659. It is based on the travels of Willem Jansz and Abel Tasman

Willem Jansz (* around 1570 ; † around 1630 also: Willem Janszoon or Willem Janssen ) was a Dutch seafarer . He is officially the first European explorer of Australia .

Willem Jansz was probably born in Amsterdam around 1570 . Nothing is known about his childhood and youth. In 1598 he sailed as a helmsman on the ship "Holland" in the service of an advance company of the Dutch East India Company to Southeast Asia . After his return home, he was promoted to first helmsman and started again for the East Indies. A few more voyages later, he left Holland in December 1603 as captain of the Duyfken ( pigeons ), one of twelve ships in another East India expedition. His ship was to develop new sources of trade in Southeast Asia for three years. In November 1605 Jansz left Banten in the direction of the Banda Islands and then took an east-southeast course over the Kei and Aru Islands (southeastern Moluccas ) to De Jong's Point in New Guinea . From here he turned south, crossed the eastern Arafura Sea without entering the Torres Strait , and drove into the Gulf of Carpentaria . Probably in March 1606 he went ashore on the west coast of the Cape York Peninsula near the mouth of the Pennefather River ( 12 ° 13 ′ 0 ″  S , 141 ° 47 ′ 0 ″  E ). Although there is evidence that seafarers from China, France and Portugal had previously come to Australia, Jansz was the first European who verifiably set foot on Australian soil. -12.2167 141.7833

Jansz found the country boggy and inhospitable. On several land expeditions a total of ten men of his crew were killed by Aborigines . Jansz mapped a good 300 km of the Australian coast, but believed it to be a southern part of New Guinea ; an error that persisted in Dutch maps for a few years. He called the newly discovered strip of land "Nieu Zelandt", a name that did not catch on, but was later used by Abel Tasman to name New Zealand . His course took Jansz to the 13th parallel. At Cape Keer-weer ("Kehrwieder", 13 ° 0 ′ 0 ″  S , 141 ° 34 ′ 48 ″  E ) in the south of Albatros Bay, he turned around and began his journey home. He passed the Prince of Wales Island in northern Australia, crossed the Torres Strait and reached the coast of New Guinea again. In May 1606 he returned to the Banda Islands and finally arrived back in Banten in June of that year. -13 141.58

The originals of his diaries and the map he made during the 1606 voyage are lost. However, there is a copy of the map in the Austrian National Library in Vienna, which dates from around 1670 and shows the location of the Duyfken's first landing in Australia. It is part of the Blaeu-Van der Hem atlas , which came to Vienna in 1730 through Prince Eugene of Savoy .

Jansz led other expeditions until he returned to Holland in 1611. In December of the same year he sailed again to the Dutch East Indies . In 1614 he was appointed governor of Fort Henricus on the Solor Archipelago ( Lomblen ). In 1617 he lived again in Holland for a short time. For the capture of ships of the British East India Company , which supported the resistance against the Dutch in Jakarta on Java , Jansz received a military award in 1619. After the peace agreement with the British, Jansz, now with the rank of admiral, was deployed together with the British against the Philippines . From October 1623 he was governor of Banda until he returned to the Netherlands in 1627 . Soon afterwards he again led a fleet of eight ships as admiral on a diplomatic mission to India, of which he reported in July 1629 in The Hague . Then the trace of Janszen is lost.