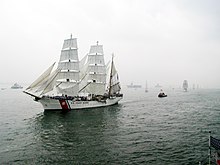 Operation Sail (short form: OPSail or Op Sail ) describes several sailing events that are held on special occasions and in which sailing ships from all over the world take part. Each of these events is coordinated by Operation Sail, Inc. This non-profit organization was founded in 1961 by the then President of the United States and has to be confirmed by the United States Congress on a regular basis.

The aim of the events is to strengthen international understanding and cooperation between countries against the background of the celebration of maritime history and training in the sense of Sail Training . It is mistakenly referred to as an event for tall ships . Although these form the heart of the event, smaller ships also take part.

If dates are set for Operation Sail events in the USA, they run at the same time as the annual International Naval Review , at which current warships from various navies are presented. So far, five events have been realized, all of which culminated in a parade on the Hudson River on the American Independence Day of the respective year with the destination New York Harbor . The Eagle , the training ship of the United States Coast Guard served at all events as host.

The first Operation Sail was a combined event with the then world exhibition , the New York World's Fair .

The organization took 4 years to complete. The organizers saw this as a possibly unique opportunity in his life to experience such a concentration of square sailors and clearly emphasized their fascination for sailors trained on sailing school ships in the guide published for the event . The organizers interpreted the training goals and the political background of the operation of such ships to the effect that they are suitable for forging a bond of understanding and promoting mutual respect on earth . (to forge a bond of understanding and mutual respect around the world) .

The event was planned in such a way that the participants from a total of 13 countries first met in Bermuda to sail together in a squadron trip to New York. On July 13th they left Gravesend Bay to reach their anchorages below the George Washington Bridge . On July 15th , they moved to the assigned piers to be viewed by the public at daily open ships until the following weekend .

Celebrates the bicentenary since the adoption of the United States Declaration of Independence . 16 ships took part in the parade.

Centenary of the landing of Christopher Columbus in North America