The title of this article is ambiguous. Further meanings are listed under Westerland (disambiguation) .

Until it was designated as a seaside resort in 1855

Dorfstrasse in Westerland, postcard (around 1900)

The Westerland beach towards the south (summer 2017) 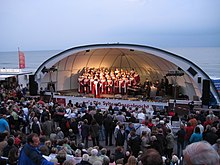 Music shell on the beach promenade 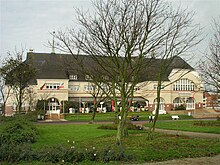 The formerly independent city ​​of Westerland is the youngest town on Sylt after Hörnum . After Eidum was completely destroyed by the All Saints flood on November 1, 1436 , the survivors founded a new place on the heather north-east of the old settlement. The name Westerland is probably derived from an old Tinnum field name on which this new settlement arose: It was the land west of the village, i.e. the Wester-Land . Today's Alt-Westerland was first mentioned in a document in 1462.

After the former Eidumers had used their church standing between the dunes for 200 years , which was still marked on Johannes Mejer's map in 1648 , they began to build their own church on the eastern edge of their new village in 1635, today's village church of St. Niels how the Eidum Church was dedicated to Nikolaus von Myra , the saint of sailors. The inventory and the bell come from the old Eidum church.

Westerland consisted of only 124 houses in 1778 and was so poor that not a single landowner could live on his land because the fertile marshland was either washed away by the sea or silted up by the dunes, as the church council wrote to the duke, connected with the Please approve a collection for the renovation of the now dilapidated church.

The seaside resort before the construction of the Hindenburg dam

In 1855 the place received the title of a seaside resort . The approximately 500 residents accommodated 98 guests in the first season. Soon Westerland was considered to be the most progressive pool, as men and women were allowed to bathe together in the so-called family pool. The first newly built hotel in the village was the Dünenhalle , opened in 1858 , later Hotel Union on Deckerstrasse. This house survived the times until it was demolished in 2002. Westerland only became the capital of the island when it was recognized as a seaside resort; Until then, Keitum had been the main town on Sylt for centuries ; For example, the only pharmacy on the island was located there until the beginning of the 20th century. Due to its central location at the intersection of all traffic axes and due to its proximity to the beach, Westerland's island supremacy has been consolidated over the past 150 years. In 1905 Westerland was finally granted city rights .

The many Catholic spa guests prompted the building of a Catholic church, the Herz-Jesu-Kirche, in 1896. This was followed in 1957 by a larger building, the Christophorus Church . The old church was then torn down by the city of Westerland. Due to the poor quality of construction, however, a decision was made in the 1990s to tear it down and replace it with a new building in the same place, which was inaugurated on Palm Sunday in 1999.

When the small village church of St. Niels was no longer sufficient for the rapidly growing population and the large number of guests, the town church of St. Nikolai was also built in 1908.

Since the construction of the Hindenburgdamm

In the 1920s, Westerland was on the way to becoming a fashionable seaside resort. During the time of National Socialism , Westerland, which until then had been considered friendly to Jews , was one of the beach baths that refused to accept Jews in 1934. With that, it lost much of its previous audience.

In 1949 it was finally recognized as a seaside spa . Many old villas and lodging houses fell victim to the construction boom that hit the city in the 1960s. Between 1951 and 1964, the former SS group leader Heinz Reinefarth was one of the commanders in the suppression of the Warsaw Uprising as mayor of Westerland.

The cityscape changed significantly in the 1960s. Large apartment blocks and hotels emerged as a result of the tourism boom. Most noticeable here was the Westerland spa center , which was built between 1966 and 1969. The three apartment blocks still tower above all other buildings in 2013. A long-lasting dispute broke out over another large building, the planned Atlantis holiday center , which was to include a 25-storey spa center, 750 apartments and 1200 underground parking spaces. The building was finally stopped by the Ministry of the Interior in Kiel, further urban development no longer relied exclusively on modern apartment blocks.

In 1988 the band Die Ärzte from Berlin wrote a song about Westerland , which is still one of their greatest hits today.

On May 25, 2008, the merger with the municipality of Sylt-Ost was decided by a referendum on January 1, 2009. Since January 1, 2009, these two communities together with Rantum have formed the new community of Sylt . 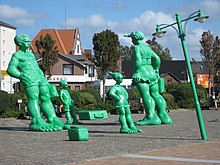 Blazon : “In silver over blue-silver waves, a red lighthouse with a golden lantern, from which three red, gold shimmering beams emanate to the right and left. The masonry below the lantern is covered with a divided sign: above silver without a picture, below blue with a silver herring inside. "

Westerland has with the " graveyard of the homeless " a special cemetery for the nameless driven dead sailors with a central time, a mighty boulder that of the Romanian Queen Elisabeth of Wied was founded in 1888 and with a poem of the hymn poet and court chaplain Rudolf Kögel is provided . On June 11, 1896, a monument to Heinrich von Stephan based on a design by the sculptor Hugo Berwald was unveiled . Westerland is also known for its long promenade along the west beach: it is over six kilometers long and has existed for over 100 years. On this promenade, there are regular spa concerts in the so-called "music shell" in the evenings. The Sylt Aquarium , opened in 2004, offers visitors an insight into the underwater world of the seas. Since 2001, the sculpture ensemble by the artist Martin Wolke The Giant Travelers has stood on the forecourt of Westerland station. 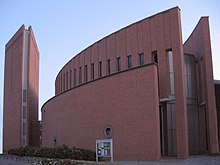 The old village church of Westerland contains a number of valuable works of art. The tower was built in 1875.

The economy of Westerland is very much geared towards the island's tourism . In 2002, Westerland was the second most important place for tourism in Schleswig-Holstein after Sankt Peter-Ording : 96,120 guests, of which 271 (0.28 percent) from abroad, booked 819,935 overnight stays. The city had 9,159 guest beds. There is a campsite in the south of the city.

Westerland is a supply center for the island of Sylt; Retail and service providers cater to residents and guests across the island.

The Adler-Schiff shipping company is based in Westerland.

Train the NOB at the station Westerland

On Sylt, as on all North Frisian islands, car traffic is permitted. There is a well-developed road network in Westerland and plenty of (partly chargeable) parking spaces. In the 1970s and 1980s, a night driving ban was introduced in some streets of the "Kurzentrum" in Westerland, for the implementation of which some streets were closed with a barrier at night from 10:00 pm, so that no car traffic was possible. The night driving ban was lifted again in 1998 and the barriers dismantled.

Sylt and thus also Westerland cannot be reached by road. Instead, there is a connection with the Sylt-Shuttle or RDC Autozug Sylt called Autozug between Niebüll and Westerland (Sylt) . The railway line, also known as the Marschbahn , leads over the 11.3 kilometer long Hindenburg dam through the Wadden Sea . Passenger traffic is carried out by Deutsche Bahn with InterCity trains and local trains.

Westerland is centrally located on Sylt. In addition to the train station with connections in an easterly direction to Keitum and Morsum, there are Sylter Verkehrsgesellschaft bus routes going south to Hörnum and north to List. These lines as well as the Westerland – Munkmarsch line represent the former network of the Sylt Inselbahn , whose operation was discontinued in 1970. There are two city bus routes in Westerland, one of which runs through the north of the city to the North Sea Clinic and the other runs through the south of the city. This bus line is intended to better connect the now scattered residential areas of the city to the city center.

Westerland can still be reached by scheduled and charter services via Sylt Airport, which is around two kilometers east of the city center .

Westerland itself does not have a port, but there are ferry connections to the neighboring islands from the ports in Hörnum and List. Sylt can be reached by car ferry on the Rømø-Sylt-Linie from the Danish neighboring island of Rømø . There is also a ferry line - without car transport - from Nordstrand via Amrum to Hörnum .

Westerland has two primary schools, a community school and a grammar school (Sylt grammar school) . There is also a Danish primary and secondary school (Vesterland-Kejtum Danske Skole) and a special needs school. The vocational schools in the Nordfriesland district have a branch in Westerland.

The Volkshochschule Sylt is responsible for adult education.

In Westerland there is a district office of the North Friesland District Music School .

Districts of the municipality of Sylt