from Wikipedia, the free encyclopedia
This is the spotted version , flagged on January 18, 2020 . There is 1 pending change that has yet to be viewed. 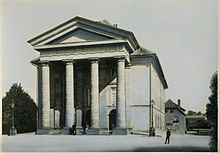 The court theater after the fire of 1912 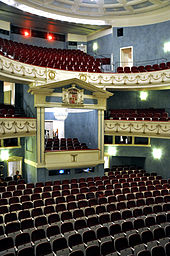 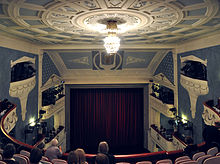 View of the stage

The Landestheater Detmold is a three-part theater with five venues in Detmold . With its guest performances in more than a hundred locations in Germany and neighboring countries, the theater is considered the largest travel stage in Europe.

In 1820, Prince Leopold II , supported by his mother Princess Pauline , decided to have a court theater built in Detmold and commissioned the state master builder from Natorp to do so . The foundation stone was laid on April 18, 1825.

After only seven months of construction, on November 8th, 1825, the curtain of the Lippische Hoftheater for the opera Titus, the Kind by Wolfgang Amadeus Mozart , was raised for the first time . August Pichler was appointed director of the new theater . The respected Pichler troupe had already been guests in the old Detmold comedy house. In 1839 the Detmold Court Theater, under the direction of August Pichler in Pyrmont, gave the world premiere of the play Die Hermannsschlacht by Heinrich von Kleist .

Both musical theater and drama were on the schedule of the court theater. Famous artists such as Christian Dietrich Grabbe as an author and feared critic and Albert Lortzing as a singer, actor and conductor worked at the theater.

On February 5, 1912, during the performance of the play The Beggar of Syracuse by Hermann Sudermann , the theater burned down to the ground because of a damaged chimney. But it was rebuilt during the First World War 1914–1915 according to plans by the Berlin architect Bodo Ebhardt . The new building was financed with donations from the Detmold citizens and funds from the Princely House. The current season could provisionally be brought to an end in the Detmold summer theater . Before the reopening, the theater building passed into the hands of the Free State of Lippe and reopened on September 28, 1919 with Lortzing's opera Undine .

On February 27, 1924, the monumental film The Hermann Battle was premiered in the Detmold State Theater. The nationalist-minded premiere audience celebrated the performance by singing the Deutschlandlied .

Like all German theaters, the theater had to close its doors on September 1, 1944 during the Second World War . After the end of the war, the British occupying forces set up their officers' mess here . The theater was therefore relocated to the Detmold Summer Theater. On July 5, 1952, the release took place and the game operations normalized again. From 1934 to 1969 Otto Will-Rasing was the theater's director. General music director was Paul Sixt , who was jointly responsible for the Degenerate Music exhibition in Düsseldorf in 1938 .

The orchestra of the Landestheater Detmold

The Fürstlich-Lippische-Hofkapelle , founded in 1843, is regarded as the forerunner of the State Theater's orchestra. The castle in Detmold was the seat of the then smallest German principality of Lippe . The regents founded and promoted music theater to such an extent that well-known composers such as Albert Lortzing and Johannes Brahms took up residence in Detmold.

After the Second World War, the music ensemble took on the tasks of a theater orchestra in the Detmold State Theater with a focus on opera , operettas , musicals and ballet . The musical theater's program includes such sophisticated productions as Georg Friedrich Handel's Alcina or Purcell's King Arthur . In addition, operas by Wolfgang Amadeus Mozart , Giacomo Puccini , Giuseppe Verdi and Richard Wagner are performed, as well as contemporary operas by Giselher Klebe , Hans Werner Henze and Udo Zimmermann . The light muse is represented with operettas by Franz Lehár , Johann Strauss and Karl Millöcker and increasingly with musicals.

Under the direction of General Director Erich Wächter, some of the productions were relocated to the symphonic area in the 2001/02 season . In addition, the orchestra took part in festivals and large choral concerts, thereby demonstrating its versatility. In 2002 Richard Wagner's Lohengrin was performed and in the following years also Tannhäuser , Parsifal and Der Ring des Nibelungen . Wagner productions have a long tradition in Detmold, so Tannhäuser was already in the 1952/53 season, Die Meistersinger von Nürnberg 1953/54, The flying Dutchman 1954/55, Lohengrin 1955/56, Parsifal 1957/58 and Die Walküre in the Performed in the 1958/59 season.

The Landestheater Detmold has five venues at its headquarters in Detmold: the Landestheater itself with 648 seats, the small stage in the Grabbe House with around 60 seats, the court theater in the inner courtyard with 250 seats, the Detmold summer theater with up to 349 seats, and since March In 2009 the children's and youth stage of the Detmold State Theater under the name “Young Theater KASCHLUPP!”. The made-up word was created by members of the former theater youth club from arbitrary syllables. Since the 2018/19 season this venue has been called “Das Junge Theater”.

The Landestheater Detmold is the largest travel theater in Europe. Half of the 300 or so performances during the season will be held outside Detmold. The Landestheater Detmold thus supplies cities and communities without their own ensemble with theater culture and is one of the so-called state theaters . The play area covers the entire state of North Rhine-Westphalia and also extends beyond the national borders, in the past to Hasselt in Belgium , Luxembourg and since 2014 once during the season to Winterthur in Switzerland .

The Landestheater Detmold operates as a four-part theater with opera, ballet, drama and young theater.

The following table gives an overview of the development of the number of visitors to the Landestheater Detmold by season . Both sold tickets and free tickets for all performances, including guest performances at other venues, are considered visitors. Subscriptions can entitle the holder to visit different numbers of performances. For the most part, it is rounded figures from press releases from the theater.

Director of the Detmold State Theater

Ensemble of the Landestheater Detmold in the 2015/16 season

Ensemble of the Landestheater Detmold in the season 2016/17

Ensemble of the Landestheater Detmold in the 2017/18 season

Ensemble of the Landestheater Detmold in the 2018/19 season

Ensemble of the Landestheater Detmold in the 2019/20 season

The Landestheater Detmold has no ballet ensemble in the 2019/20 season.