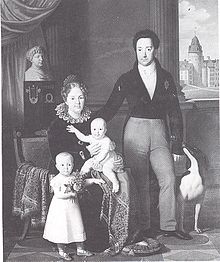 Since he was only six years old when his father Leopold I died , his extremely capable mother Pauline took over government until her death in 1820 at the beginning of his reign .

“The only thing that Princess Pauline couldn't do was bring up her two sons, her only children. In order to teach them the principles of strict morality, she had tyrannized the two of them moderately and treated them like children for so long that the oldest had become shy and reserved by nature, half a savage. "

This is what Malwida von Meysenbug , who lived in Detmold as a child, wrote in her memoir . From his youth on Leopold was a shy child, shy and reserved towards strangers and never easy to treat. Class arrogance formed early on.

Having come to the government, Leopold led a true hermit life. Leopold had two passions, hunting and the theater , which were among the best in Germany, but the cost of which was disproportionately high compared to the state's income. Albert Lortzing was engaged at the Detmold Theater from 1826 to 1833.

As his mother's political legacy, Leopold took on a constitutional dispute with the estates. On June 8, 1819, Pauline had given her country a contemporary constitution , with a state parliament of 21 members from all classes, elected according to the same, direct suffrage. The nobility, feeling neglected, achieved the repeal of the constitution at the Bundestag in Frankfurt. It was not until July 6, 1836, that a new constitution was presented which did not grant adequate representation to the citizens, peasants and workers, who made up the majority of the population and the main taxpayers. Under the influence of the March Revolution in 1848, Leopold granted the general, equal and direct suffrage to the Lippe Landtag, which was introduced by the ordinance of January 16, 1849. However, there was no agreement between the state parliament and the government on the issue of the draft of a new constitution. Leopold died on January 1, 1851, and passed on his mother's legacy, the constitutional dispute, to his successor.

His wife, Princess Emilie von Schwarzburg-Sondershausen (born April 23, 1800), was a good, gentle woman who submitted to the strict way of life of her husband. The couple had nine children and had an exemplary family life: