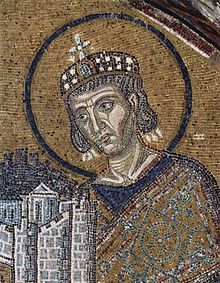 Constantine the Great with the city model of Constantinople (mosaic in Hagia Sophia , around 1000)

In late antiquity , after the acceptance of Christianity by the Roman emperor Constantine I, his successors intervened extensively in the internal affairs of the church, including the definition of their doctrine of the faith. All-church councils met until the 5th century on the orders of the emperor , who personally or through representatives directed the procedure of the council. This position of the emperor is sometimes referred to as Caesaropapism . After the division of the Roman Empire in 395 and the fall of the Western Empire in 476, this role was assumed by the Eastern Roman Emperor in Constantinople .

The question arose about the relationship between kingdom and church and between secular and spiritual power. While theologians like Eusebius of Caesarea in the 4th century, under the influence of the Constantinian turning point, made a strong identification between empire and church, Augustine pleaded in De Civitate Dei in the 5th century for a clear separation between political and salvation history.

A doctrine of two powers was first formulated in 494 by Pope Gelasius I. This happened against the background of an ongoing schism caused by imperial politics . The doctrine of Monophysitism had been condemned by the Council of Chalcedon in 451 , but had a large following , especially in Egypt . In order to avoid the theological dichotomy from endangering the unity of the empire, the emperors had pursued a balancing policy since Zeno, which they also had the patriarch of Constantinople put into practice in the church. Following this approach, it was avoided to mention the controversial council to the Monophysites and the administration of monophysite bishops was tolerated in Egypt and also in Syria, where the doctrine now spread increasingly. The Roman popes protested against this, who played a major role in the definition of Chalcedon and were less under imperial power, so that there was a break between Rome on the one hand and Constantinople on the east. The situation was exacerbated in 493 when Emperor Anastasios I, a man suspected of Monophysite sympathies, ascended the throne.

To emphasize his non-recognition of imperial measures in relation to the decisions of the Council of Chalcedon, Pope Gelasius sent a letter to Emperor Anastasios teaching that God had imperial power ( regalis potestas ) and the spiritual authority of the bishops to govern the world ( auctoritas sacrata pontificum ) used. Of these two, the weight of the latter is all the more difficult, since the bishops also have to give an account of the kings before God's judgment. “For you know,” continued Gelasius in his letter to the emperor, “most gracious son, that although you are dignified above the human race, you piously bow your neck to the rulers of divine things and expect from them the means of your salvation. “The papal auctoritas was of particular importance for Gelasius , since God installed the Bishop of Rome“ as the highest above all bishops. ”The new thing about Gelasius' statement was that he put the state potestas and the episcopal auctoritas on the same level . The episcopal auctoritas was defined as the spiritual power to bind people and resolve their sins. The decisive factor for Gelasius' position is the fact that his doctrine of dual violence is still a decidedly defensive concept. In his letter he calls for the Church to be responsible for her own area without wanting to interfere with the worldly order.

The term "two-sword doctrine" is not yet applicable to the writing of Gelasius. This designation is based on the allegorical exegesis of Lk 22.38  EU from the early phase of the investiture dispute in the 11th century. There it says about the apostles: “But they said: Lord, see, here are two swords. But he said to them: It is enough. ”(Latin At illi dixerunt Domine ecce gladii duo hic at Ilse dixit eis satis est . ). This passage was then interpreted very differently by supporters of Emperor Henry IV and supporters of Pope Gregory VII. Gelasius, on the other hand, does not work with this biblical reasoning.

In the early phase of the investiture controversy, for example, King Henry IV was able to introduce the two-sword doctrine to emphasize his unrestricted position in the secular area. On the papal side it was pointed out that with Luke the apostles are in possession of the swords; furthermore, the doctrine was further sharpened to the Pope with reference to Matthew ( Mt 26,52  EU ), where Jesus instructs Peter to sheath his sword. As the successor of the Apostle Peter, the Pope therefore has the secular sword ( gladius materialis ) and the spiritual sword ( gladius spiritualis ), but leaves the worldly sword voluntarily and revocably to the emperor. A first formulation of this interpretation can be found in Dictatus Papae from 1075 and later also in Bernhard von Clairvaux .

In this form, the doctrine of two swords became an argument for the primacy of papal over imperial power that was often repeated up until the 14th century. This was particularly aggravated by Pope Boniface VIII , who in 1302 in the Bull Unam Sanctam did not claim actual secular power for himself, but the subordination of the monarchs, which in this case was directed against the French king. The secular sword is subordinate to the spiritual, it is used and tolerated by the Pope, or in other words: the spiritual sword is wielded by the church and the worldly for the church. In addition, the spiritual should speak right about the worldly power, whereby it itself is only obliged to God. Since the political influence of the Pope ended with the death of Boniface, the factual significance of the two-sword theory waned at the end of the Middle Ages.

The fundamental problem of a politically active church and the connections between throne and altar persisted. Following the two-swords doctrine of the interpreted Protestantism in resorting to writings and statements of Martin Luther , this new in terms of a two kingdoms doctrine , which later helped the secularism to establish and make theologically acceptable.