The so-called Trivulzio portrait (1476) is one of Antonello's portraits suggested as a self-portrait (Museo civico d'arte antica ( Palazzo Madama ), Turin)

Antonello da Messina , actually Antonio di Giovanni de Antonio (* around 1429/1430 in Messina , † 1479 in Messina) was an Italian painter who made a decisive contribution to the spread of the then new technique of resin oil painting in Italy in the mid- 15th century . He succeeded in balancing the light, the mood and the love of detail of old Dutch painting with the monumental, rational spatiality of the Italian school. His portraits are famous for their vibrancy and psychological depth.

Throughout his entire career, he has shown a dynamic ability to absorb the artistic impulses of his respective places of residence. At the same time, he supplied his own developments that contributed to the enrichment of the local painting school. In Venice, in particular, he used his influence to renew local painting, where the pittura tonale developed, which is characteristic of the Venetian Renaissance and is characterized by an extremely soft and humane style. 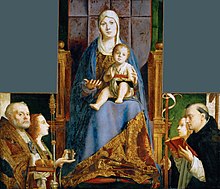 Maria with child and the hll. Nikolaus von Bari, Anastasia (?), Ursula, Dominikus and (cut by the frame) Helena (1475/76), Kunsthistorisches Museum (fragment of the altarpiece for the Church of San Cassiano)

Antonio di Giovanni d'Antonio was the son of the stonemason Giovanni d'Antonio Mazonus from Messina and his wife Garita (probably Margherita). His son Jacobo , called Jacobello d'Antonello, was his heir and also a painter. Antonio was buried in 1479 in the church of Santa Maria di Gesù Superiore in Messina. Antonio is known by his nickname Antonello da Messina, after the town he was born in.

Antonello was already a highly esteemed painter during his lifetime, of whom only a few biographical details are known to this day. The year he was born in Messina can only be inferred from the age at which he died. According to Giorgio Vasari , the artist is said to have been only 49 years old when he died, he died of consumption . A teaching of the young Antonello with the Neapolitan Colantonio around 1450 is relatively reliably documented. This emerges from a correspondence between the humanist Pietro Summonte (1463–1526) and Marcantonio Michiel , which is dated to the year 1524. Between 1450 and 1453 Antonello then worked in Naples, Messina, Palermo and in Reggio di Calabria . After completing his training, he returned to Messina in 1456.

The legend, already brought up by Vasari, belongs to the realm of fantasy that Antonello da Messina learned his detailed painting style with its precise materiality in the Netherlands from the brothers Jan and Hubert van Eyck and, after his return from Flanders, perfected oil painting there (i.e. the one with distemper with painted pictures with oil paints to glaze ) to Italy brought. An early picture of Christ of Flemish character in the National Gallery in London, which bears the year 1465 , has long been considered evidence of this . Today, art historians largely agree that even the life data of the van Eycks and Antonellos speak against this thesis.

It can be assumed that Antonello da Messina at least saw works by Rogier van der Weyden or Jan van Eyck himself in Italy and developed his own technique of oil painting from this view. A meeting between Antonello (under the name Antonello da Sicilia ) and the Flemish Peter Christ in Milan in early 1456 is assumed to be possible. A more recent, controversial thesis claims an influence from the works of the Provencal painting school around Enguerrand Quarton , which were present in Naples at the time , but which presented itself in a different artistic expression than Antonello.

The stay of Antonello and his family in Amantea in Calabria in 1460 and in Messina before 1465 and then again in 1473–74 can be reliably proven. From 1474 to 1476 he probably stayed in Venice, initially for the altarpiece of San Cassiano . Thanks to his new style of painting, he quickly gained a great reputation as a portrait painter and had contact with Giovanni Bellini and Vittore Carpaccio . The fact that research into Antonello's precise life data is hardly successful even today is a consequence of the destruction of the archives during the great earthquake in Messina in 1908. Antonello's success in Venice is reflected in artist legends, according to which Bellini, for example, is driven by envy of his colleagues would have crept into his workshop. In fact, the majority of Antonello's surviving works come from this short creative period in the lagoon city. 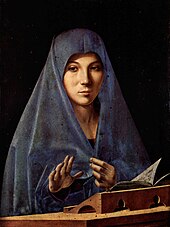 Mary of the Annunciation ( Annunziata di Palermo ), around 1475

From the Pala di San Cassiano (1475) only the figures of saints are preserved today ( Kunsthistorisches Museum , Vienna ), representations of the work have only survived in a reduced size. Without this extremely large work, the devotional pictures of Bellini and the school around Titian are hard to imagine. Other major works are the Annunziata (1474) in Munich , 1475 another, further developed Annunziata in the Galleria Regionale della Sicilia in the Palazzo Abatellis in Palermo , an Ecce homo (1473) in the Collegio Alberoni in Piacenza , a crucifixion in Antwerp ( Royal Museum of the Beautiful Arts ), the Condottiere , a male portrait, in the Louvre (both from 1475), a young man in the Berlin (1478) and a Saint Sebastian in the Dresden picture gallery .

Many of the portraits differ from the Flemish style of representation in the presence and openness with which the portraits show themselves to the viewer. The dramatic light-shadow modulation in some works already heralds an artistic concept that Caravaggio developed to mastery much later .

The Annunziata of Palermo is a peculiarity in Renaissance painting. The angel of the Annunciation is not in the picture, Mary is shown sitting behind an open book. The action is only reflected in the gestures and facial expressions of Maria. According to Robert A. Gahl jr. ( Pontifical University of the Holy Cross in Rome ), the book is said to be the Old Testament . According to Gahl, the indicated text is probably verse 14, chapter 7 of the book of Isaiah , in which the birth of the Redeemer by a virgin is prophesied.