The Uckermark city Lychen [ lyːçən ] is a middle of the natural park Uckermark Lakes situated nationally recognized resort in the district Uckermark in the north of Brandenburg . Lychen carries the additional designation Flößerstadt . Due to its location in the Neustrelitz Kleinseenland , it is a popular holiday destination.

In terms of nature , Lychen is part of the Neustrelitz Kleinseenland . The city lies between seven lakes in the Uckermark : Wurlsee , Großer Lychensee , Nesselpfuhl , Stadtsee , Oberpfuhl , Zenssee , Platkowsee . The urban area also includes other lakes such as the Großer Küstriner See or the Mellensee . In the south, Lychen has a share in the Himmelpforter Heide forest area with the former Tangersdorf military training area ; the area is part of the Kleine Schorfheide nature reserve . Lychen is connected to the Upper Havel waterway via the Woblitz and to the Feldberg lake landscape via the Küstriner Bach . In the north, the Lychens area borders on the Mecklenburg Lake District , in the west on the Oberhavel district .

According to its main statute, the city of Lychen (in addition to the core city) is divided into three districts and municipal parts:

It was first mentioned in documents in 1248 as in Liechen . The spelling Lychen is considered proven for 1299. The first finds of a settlement in the Lychen area date from the Middle Stone Age . Slavs settled in the course of the Great Migration (5th – 6th centuries) . They built their settlements on islands and peninsulas and built refuge castles, such as B. the castle wall (current hotel "Lindenhof") on a peninsula in Wurlsee .

Margrave Johann I founded the city in 1248. It was given a six-meter high city wall and three gate towers, of which the Fürstenberger Tor and the Stargarder Tor are only partially preserved. In 1976, the Stargard gate tower collapsed in a strong storm. As a result of armed conflicts, Lychen fell to Mecklenburg in 1302 . 150 years later the Margrave Johann von Brandenburg recaptured the city and after the Peace of Wittstock it came back to Brandenburg. The Thirty Years War (1618–1648) and two large fires (1648 and 1732) destroyed almost the entire city several times. During the Seven Years' War (1756–1763) Lychen came under Swedish occupation.

The opening of the Britz – Fürstenberg railway in 1899 brought Lychen's economic development with it. A post office, pharmacy, train station and chapel were built by 1910. In 1901 Lychen received the first telephone connection to Templin and in 1903 his own newspaper - the Lychener Zeitung . Especially through the establishment of the sanatorium, jobs and apprenticeships were created in the construction, printing, laundry, household school, on the poultry yard, in the gardening and in the spa hotel, and Lychen developed into a climatic health resort. In the early 1930s Lychen recorded the highest number of overnight stays by summer guests in the province of Brandenburg. The sanatoriums looked after around 1000 patients and employed 380 Lychen residents.
In 1923 the villages of Hardenbeck , Rosenow and Warthe were separated from the Lychen district court. In February 1934 the NS-HAGO issued signs with the inscription German business . During the Germany flight from June 13-14, 1938, over 100 aircraft landed and took off in Rutenberg. 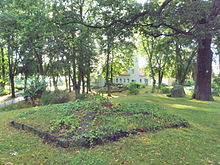 Area of ​​the former Jewish cemetery on Oberpfuhlstrasse

During the " Reichskristallnacht " ( Reichskristallnacht ), the cemetery of the local Jewish community in Stargarder Strasse behind the city gate, which has been based in the town since the 15th century, was desecrated and destroyed. In the Heinze und Blankert company from Berlin, which manufactured parts for grenade detonators and machine-gun ammunition from 1939, 20 to 25 prisoners from the Ravensbrück concentration camp worked every day . In 1942 the municipality bought the area of ​​the Jewish cemetery and designed it as a small green area. A memorial stone erected by the Mecklenburg State Jewish Community has been commemorating the devastation of the cemetery since 1970 . In addition, the city administration had a plaque attached to the lower entrance, which keeps the events alive. The large oak on the hill is specially mentioned.

1957 Tangersdorf was incorporated into Lychen. From 1968 to 1990 the Himmelpfort special weapons depot was located southwest of Lychen . This former nuclear weapons depot of the armed forces of the Soviet Union is also known as Lychen II . 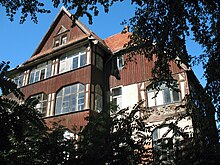 In 1903 Gotthold Pannwitz founded the Hohenlychen sanatorium as a community sanatorium belonging to the community sanatorium association of the Red Cross to fight tuberculosis , initially to treat sick children. After gradual expansion, Department XIV, the Kaiserin Auguste Viktoria Sanatorium, was built in 1912 and a hospital in 1913.
During the Second World War , the sanatorium, under the direction of Karl Gebhardt, was initially converted into an orthopedic clinic and then a hospital for the Waffen-SS . The lung specialist Kurt Heissmeyer worked here, among others , who from June 1944 carried out human experiments on Soviet prisoners of war in the Neuengamme concentration camp and infected twenty Jewish children between the ages of 5 and 12 from Auschwitz with tuberculosis in November 1944 .

During the GDR era, a number of companies in Lychen maintained holiday properties and company holiday camps for their employees and their children, for example the VEB Walzwerk Finow and the VEB motor vehicle plant " Ernst Grube " ( Werdau ) and the VEB Lacke und Farben Berlin in the Tangersdorf district at Zenssee .

The city council consists of 16 city councilors and the full-time mayor. The local elections on May 26, 2019 resulted in the following distribution of seats:

In the mayoral election on February 28, 2010, Sven Klemckow was elected for a term of eight years with 74.5% of the valid votes. The city council retired on January 31, 2016 for health reasons.

In the mayor's election on June 26, 2016, Karola Gundlach was elected as the new mayor for a term of eight years with 58.0 percent of the valid votes.

The coat of arms was approved on June 2, 1993. Blazon : “In red over a blue-silver corrugated shield base, a silver castle, with two pyramid-shaped tinned towers, each covered with a black window, and a goalless tinned and square wall in between; above it, between two six-pointed silver stars, a silver shield with a gold-armored red eagle. “
The castle is supposed to symbolize the city wall with its towers. The waves represent the lakes around Lychen. Since Lychen belonged to the Mark Brandenburg, the eagle was included in the coat of arms. The stars in the coat of arms remind us that coins were minted in Lychen in the 14th century, on which the Margrave of Brandenburg was depicted between stars. 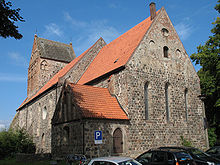 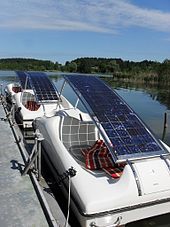 Solar boats on the Nesselpfuhl

Lychen's twin cities are Hopsten in North Rhine-Westphalia and Czaplinek in the Polish West Pomeranian Voivodeship.

In addition, there is a Catholic Church, a New Apostolic Church , an open-air theater, the Malerwinkel and the Chors Stift in the city .

Lychen can be reached by boat from Berlin or Hamburg via the Havel , through the Woblitz and the Großer Lychensee . Large parts of the Lychen area are part of the Uckermärkische Seenlandschaft nature park. Therefore, some lakes, such as the Wurlsee, are not allowed to be sailed with motor boats, the Küstrinchener Bach is not allowed to be used when the water level is low, otherwise only up to the first lock (in case of purgatory). Lychen's waters offer various opportunities for water sports, such as swimming, pedal boat , steamboat, raft or solar boat trips . The approximately 4 × 2 m large solar catamarans SOL 10 , which are stationed in Nesselgrund, have a motor output of 550 W (0.75 PS) at a speed of 5 km / h (around 2.7 knots) and can be used without a sports boat license . The solar cells also serve as a hood.
Also, trolley rides , wagon rides, nature walks or bike rides are possible. The Uckermärkische Radrundweg leads through Lychen (with connection to the long-distance cycle route Berlin-Copenhagen ). Every spring Lychen hosts the Lychener Seenlauf over a distance of 30 kilometers.

Lychen barrier-free
There are two paved, partially barrier-free circular paths of different lengths with information boards in the form of oversized thumbtacks, which point out interesting things as well as handicapped accessible toilets and the gradient of the paths. The passenger ship Möwe and the tourist raft Pläätz are accessible for guests in wheelchairs. There are wheelchair-accessible draisines on the Fürstenberg – Lychen route, and one of the Kremser in Lychen is equipped with a ramp. Two barrier-free holiday apartments can be found in the Sonnenhof apartment complex near the steamboat landing on the Stadtsee.

In earlier centuries rafting was one of the city's most important industries. Not only was timber assembled into rafts and brought to larger construction projects, often in weeks of work, but people also transported other non-perishable goods on the rafts.
With the establishment of the health resorts in the 20th century, tourism developed into an important economic base for the city. Furthermore, the construction industry with various trades of construction planning and construction, fishing with fish smoking and fish trade (in the Beenz district and on the Großer Lychensee), various therapeutic practices, car trade, car and truck service, timber trade, green space service, computer service, boat service and - sales and other companies based in Lychen.

The Fürstenberg – Templin railway, with stations in Lychen , Hohenlychen and Tangersdorf , has been used by tourists since 1996 as a route for bicycle draisines after it was closed . The connection to Fuerstenberg / Havel , Templin and other surrounding places today with the buses of the LAA ensured.

Personalities with connections to the city