The office free community field Seenlandschaft is located in the southeast of the district Mecklenburg Lake in Mecklenburg-Vorpommern. It is shaped by tourism and forms a basic center for its surroundings . Historically, it is part of the Mecklenburg-Strelitz cultural region .

The district of Feldberg has been certified as a Kneipp spa since October 2015. The districts of Carwitz , Fürstenhagen, Lichtenberg, Schlicht, Waldsee and Wittenhagen are state-approved resorts .

With almost 200 km², the community is the largest in Mecklenburg-Western Pomerania. It is located in the southeast of Mecklenburg-Western Pomerania on the state border with Brandenburg . The name refers to the former town of Feldberg and the numerous lakes in this area, which lies between the Mecklenburg Lake District and the Uckermark Lakes . The largest of the lakes in the municipality are Carwitzer See , Breiter Luzin , Zansen , Schmaler Luzin , Feldberger Haussee , Dreetzsee , Dolgener See and Krüselinsee .

The state border with Brandenburg runs along the Bibelsee , the south bank of the Carwitzer See, the east bank of the Dreetzsee as well as the Krüselinsee, the Küstriner Bach , the Kleiner Mechowsee and the Großer Mechowsee . The area belongs to the terminal moraine of the Pomeranian stage of the Vistula Ice Age . With the bird cherry (north of the latitude Luzin) a height of 166.2  m above sea level. Reached NHN . The community is located in the Feldberger Seenlandschaft nature park . The district of Waldsee is located in the easternmost part of the Müritz National Park . 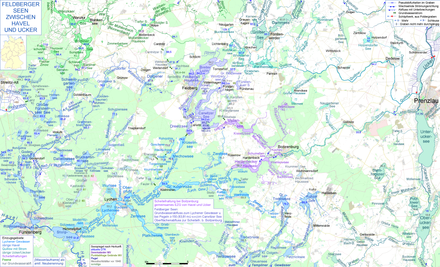 The eponymous lake group (bluish purple) and its drainage routes: Lychener waters (bright blue) to the Havel and Strom → lower Quillow to the Ucker

The districts of the municipality are:

On June 13, 1999, the city of Feldberg and the communities of Conow, Dolgen, Lichtenberg and Lüttenhagen merged to form the new community of Feldberger Seenlandschaft.

From 1701, today's districts of the Feldberger Seenlandschaft belonged to the partial duchy, partial grand duchy and Free State of Mecklenburg-Strelitz until its reunification with the Mecklenburg-Schwerin part of the country in 1934.

→ Main article : History of the district of Carwitz

During mowing work in August 2009 several holes over five meters deep were discovered in fields near Dolgen. After geological investigations it turned out that these were geological exploration wells from the 1970s, which were carried out in preparation for the Feldberg 1/87 well. This well was used to search for oil and / or natural gas and had a depth of 4920 m.

Plain was the domain . Landlord was u. a. August Weißenborn, who had the manor built around 1880. Not far from the manor house are the remains of the fixed house (tower hill) "Maledei" .

Tornowhof was established in 1730 as a dairy from Wittenhagen. In 1870 this was built as an independent estate and the two-story manor house, connected to a one-story administrator's house.

Waldsee was in half-timbered style as a hunting lodge for Erbgroßherzog 1900 Adolf Friedrich V. built. From 1933 the hunting lodge was used by Reichsstatthalter and Gauleiter Friedrich Hildebrandt . Since 1952 it has been the apprenticeship home of the Neustrelitz forestry company. Today it is a hunting hotel.

Weitendorf was a princely farm after 1648 . The manor house dates from 1908 and was after 1947 a. a. School with teacher's apartment and kindergarten.

Wendorf was a manor village with many different owners. The manor house dates from 1857 and was the seat of LPG and consumption after 1958 .

The former village of Krüselin, located in today's municipal area , has been desolate since 1945.

The municipal council consists of 15 members and the mayor. They have been distributed as follows since the local elections on May 26, 2019 :

Lindheimer was elected in the mayoral election on September 24, 2017 with 54.6 percent of the valid votes for a further term of eight years.

The municipality does not have an officially approved flag .

The official seal shows the coat of arms of the municipal coat of arms with the inscription "GEMEINDE FELDBERGER SEENLANDSCHAFT".

In 1965 the Feldberger Carnival Club (FKK) was founded, the first president was Johannes Huebner ("Hannes the Heavenly Dog"). The carnival initially took place in Carwitz and in the Hotel Hullerbusch before the event established itself in Feldberg. There the battle cry "Schlaewitzberg Huneu" arose, which stands for the districts (Schlicht, Laeven, Carwitz, Feldberg, Hullerbusch, Neuhof). There are over 100 members and a children's dance group with around 30 children, the Waldhotel Stieglitzenkrug has been the parent company since the 2000s. In Feldberg there is also its own Rose Monday parade , which is a specialty for Mecklenburg-Western Pomerania.

In 1855 August Friedrich Erfurth (around 1820–1904) opened a hydrotherapy institute in Feldberg . Since then there has been a spa in Feldberg. In 1998 the rehabilitation clinic at Haussee was opened with 235 beds, a clinic with the departments of cardiology, neurology, orthopedics, psychosomatics and medical wellness. The clinic is a certified MS center. Also in 1998 the Luzin Clinic was opened as a specialist clinic for addictions with 52 places. It treats both alcohol and drug addiction.

The municipality of Feldberger Seenlandschaft is located on the L 34 state road between Möllenbeck (on the B 198 Neustrelitz - Woldegk federal road ), Feldberg and the state border with Brandenburg south of the Conow district and on the L 341, which connects the Triepkendorf, Feldberg and Schönhof districts.

The community has no rail connection. Until May 28, 2000, there was a connection over the railway line Neustrelitz South Feldberg with the breakpoints Dolgen (Meckl) , Weitendorf (b Feldberg) (until 1995) and the railway station Feldberg (Meckl) . In November 2000, trains ran again to mark the 90th anniversary of the line, but it was shut down on December 22, 2000. In 2005 the company ELS Eisenbahn Logistik und Service acquired the route, until 2015 occasional special trips were offered.

Sons and daughters of today's districts

Personalities associated with the community and its current districts

Cities and communities in the Mecklenburg Lake District