Elsa Brändström , also known and honored as Elsa Brandström , (born March 26, 1888 in Saint Petersburg , † March 4, 1948 in Cambridge, Massachusetts ) was a Swedish philanthropist . She became known as the "Angel of Siberia" because she stood up for German and Austrian prisoners of war in the Russian prison camps of the First World War . 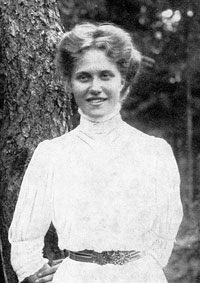 Elsa Brändström was the daughter of the Swedish military attaché in Russia Per Henrik Edvard Brändström (1850–1921) and his wife Anna Wilhelmina Eschelsson (1855–1913). She attended the teachers' college in Stockholm and in 1908 returned to her parents in St. Petersburg . Her mother died in 1913.

Elsa Brändström experienced the beginning of the First World War in St. Petersburg and volunteered as a nurse in the Russian army . In 1915 she traveled to Siberia for the Swedish Red Cross in order to set up basic medical care for the German prisoners of war in Russian custody. During her first visit to a Siberian camp with her helper Ethel von Heidenstam , she encountered desolate conditions in completely overcrowded barracks. Typhus was rampant in the woodshed ; there was a lack of beds, blankets, water and laundry facilities. Typhoid , frostbite , starvation or diarrhea led to a death rate of up to 80%. Brändström and Heidenstam campaigned successfully with the Russian authorities for better care for prisoners of war and organized help through the German , Swedish and Austrian Red Cross . The measures were successful: in the Krasnoyarsk camp , mortality fell to 18% over time.

After returning to St. Petersburg, she helped set up a Swedish aid organization. Their work was severely hampered by the outbreak of the October Revolution of 1917. Her work permit was revoked in 1918, but she nevertheless traveled to Siberia several times between 1919 and 1920. After being arrested in Omsk , she returned to Sweden and from there organized money collections for the prisoners of war.

In 1923 she went on a six-month lecture tour to the USA at her own expense in order to collect 100,000 US dollars for a children's home, which she set up that same year in Mittweida in Neusorge Castle for 200 children and operated for seven years. In 1925 a lecture tour followed through Sweden. She was a co-founder of the German National Academic Foundation . 1927 it was approved by the University of Tubingen , the honorary doctorate awarded.

In 1929 she traveled to the Soviet Union , which was founded in 1922, to create settlement opportunities for former prisoners of war in Siberia, but had to give up the project because private initiatives were not wanted in the Soviet system. In the same year she married the Ministerialbeamten and Professor Robert Ulich in Schmeckwitz-Marienborn and moved with him to Dresden. In 1931 she sold the Schreibermühle and handed over the Neusorge home to the Leipzig Welfare Association. She founded the Elsa Brändström advertising community for women (fund for student money for former children from Neusorge). Their daughter was born on January 3, 1932 in Dresden .

In 1933 Robert Ulich accepted a professorship at Harvard University , and the family moved to the USA, where Elsa Brändström-Ulich took care of refugee aid for arriving Germans and Austrians. In 1939 she opened the "Window Shop", a restaurant as a job creation measure for refugees in Cambridge (Massachusetts) , a suburb of Boston . In 1948 this facility was renamed “Elsa Brandstrom Ulich Assistance Fund” in her honor.

Grave of the Brändström family in Sweden

Towards the end of the war , she began an aid campaign for needy children in Germany, which eventually resulted in the organizations CARE International (Cooperative for American Relief in Europe) and CRALOG (Council of Relief Agencies Licensed for Operation in Germany). In 1945 she made one last lecture tour through Europe for the Save the Children Fund .

Her last planned trip (to Germany) was due to her illness. Elsa Brändström died in Cambridge in 1948 of bone cancer at the age of 59. She found her final resting place in the north cemetery of Solna outside Stockholm .

"The war produced many heroines in the various nations, but in my opinion never again someone who would be more worthy of admiration than Elsa Brändström."

“It is a precious gift to meet someone in whom love - and that is to say God - reveals itself so overwhelmingly. Theological arrogance and pious isolation lose ground to such love. [...] Your life was irrefutable proof of the truth that love is the most perfect power of being, even in a century that is one of the darkest, most destructive and cruelest of all centuries since the beginning of human history. "

Postage stamp (1951) from the series Helpers to Mankind

Sculpture with memorial plaque in Krems an der Donau

March 4th is the day of remembrance for Elsa Brändström in the Evangelical Name Calendar .

Elsa Brändström as the namesake

An exhibition is dedicated to Elsa Brändström, which in 2017 and 2018 stopped at the Frauenmuseum Bonn , the Tapetenwerk Leipzig and the monastery church Grimma . They created 40 female artists from GEDOK Bonn and Leipzig, the female artists' association founded in 1926.

Elsa Björkman-Goldschmidt was a childhood and school friend of Elsa Brändström who had a lifelong friendship. She was also active in looking after prisoners of war. The first book was to appear in German, which was no longer possible for political reasons.