PureBasic is a programming language based on BASIC . The key features are portability (currently Windows, Linux, macOS are fully supported and AmigaOS partially supported), the creation of very fast programs and the easy to learn BASIC syntax . In addition, PureBasic offers a large number of library functions that are clearly and simply structured. This makes PureBasic suitable for beginners as well as experts. Despite the beginner-friendly syntax, the advanced options such as B. pointers , structures, procedures and dynamically linked lists, fields and maps PureBasic to a versatile programming language. The use of inline assembler for time-critical code sections is also possible.

The PureBasic inventor Frédéric Laboureur wrote many additional instructions in 68000 assembler ( assembly language for the Motorola 68000 family ) for the Amiga version of Blitz Basic at the end of the 1990s . Since Blitz Basic for the Amiga had been officially discontinued a few years earlier, he and Roger Beausoleil developed the first compiler that used the commands written for Blitz Basic. Even back then, this compiler supported various processor architectures (initially code generation for PowerPC and 680x0 ). It was later ported to the Windows, Linux and macOS systems supported today. The result was PureBasic. At first, Laboreur wanted to baptize its language Phoenix . However, he rejected this idea because he feared that users would not find this name in search engines without the BASIC appendix . Then he wanted to call it PowerBasic . But this name was already given for another programming language. In the end, Laboreur decided on PureBasic. With pure (German clear , pure ) he wants to express that PureBasic is easy to understand and easy to use. The first version of PureBasic that did not have beta status appeared on December 17th, 2000. Since November 4th, 2007 version 4.10 is available for Windows, Linux and macOS, with which it is possible for the first time, independent of the operating system to use the entire instruction set of PureBasic, which simplifies the portability of the source code.

PureBasic must be approved (licensed) for each user individually. This means that a user can set up PureBasic on any of his computers with the purchase of a license .

The license may therefore not be shared between several people. Exceptions to this are special licenses for school classes and companies, which then cover an entire class or a company location.

A PureBasic license is valid for all supported platforms, so it is not tied to a development platform. The license of PureBasic is therefore not free ( proprietary ) for everyone (except the manufacturer ). The only exception are the standard libraries of the version for AmigaOS , which are open source and freely available. A special feature of the license is the right to free updates to new versions for life.

The following source code represents a simple PureBasic program that outputs the message "Hello world!" In a notification window:

The output under Windows: 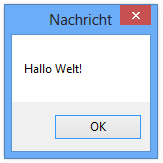