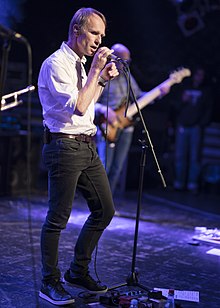 Norbert Leisegang on December 6, 2017 in the Hamburg market hall

Norbert Leisegang (born September 13, 1960 in Bad Belzig ) is a German musician . He is co-founder of the Germination group .

Leisegang was born the second of four children to a teacher. After graduating from high school in 1979, he founded the band “Jogger” with his siblings Marion, Roland and Hartmut.

Norbert Leisegang at the TFF Rudolstadt 2013

After serving in the army, he studied from 1981 to 1985 at the "Karl Liebknecht" college of education in Potsdam to become a graduate teacher for mathematics and physics. He then worked as a tractor operator , warehouse worker and lifeguard, among other things . His main occupation, however, was songwriting and singing in the band "Keimzeit".

Leisegang lives and works in Potsdam and Berlin .

His first publication of twelve original compositions appeared in 1989 on the Keimzeit album "Irrenhaus".