As Curacao [ kyʀasaːo ] and partly as Triple Sec are liqueurs with oranges called taste, after the prior Venezuela lying Dutch island of Curacao are named.

In its original form, these are liqueurs with the skins a characteristic of the island sour orange flavored type settings. The Curaçao liqueurs, alternatively or additionally referred to as Triple Sec , traditionally have a higher alcohol content. Since the terms Curaçao and Triple Sec are not protected designations of origin or quality in the sense of the EU Spirits Regulation , liqueurs named in this way can have been produced worldwide and with a wide variety of recipes.

After the Spanish discovered the island in 1499, they tried to grow oranges there from 1527; However, the trees could not stand the soil and weather conditions there, their fruits were inedible. When the plantations were then abandoned, the orange trees overgrown, so that a bitter orange subspecies was created. These so-called "Curaçao fruits" are a separate subspecies of the bitter orange ( Citrus aurantium currassuviensis ).

Over time (exact dates are not known) it was found that the dried peels contain essential oils with a particularly intense aroma, which are suitable , among other things, for the production of orange- flavored spirits .

Such liqueurs were very popular in France in the 19th century: the Combier Triple Sec was launched in 1834, Cointreau after 1875 and Grand Marnier in 1880 . It was not yet the "Cordon Rouge" made with cognac, which is better known today, but a Triple Sec based on neutral alcohol. On the island itself, however, larger production began in 1896 with the Curaçao of Curaçao from the distillery of the Senior family, which is still produced today .

Traditionally, the dried peels of normal oranges, bitter oranges or real laraha ( bitter oranges that grow on the island of Curaçao) are soaked in neutral alcohol , which releases the aromas. In addition, peels of other citrus fruits, spices and flavors are used for flavoring, so that Curaçao liqueurs from different manufacturers sometimes have very different tastes. The addition of flavorings is also permitted. The resulting macerate is then bottled mixed with alcohol, sugar and water.

For liqueurs, the EU Spirits Regulation stipulates a minimum sugar content of 100 g per liter, but for orange liqueurs it is usually more than 250 g per liter. The alcohol content must, like all spirits , at least 15% vol. be. Curaçaos usually contain at least 20 percent alcohol by volume . Orange liqueurs with 30 percent or more are often referred to as "Triple Sec" (after an old brand for orange liqueur; French literally "three times dry") or "triple orange". Other additions such as “dry orange” or “red orange” only indicate the taste or color of individual products, but do not represent recognized generic terms or quality levels. 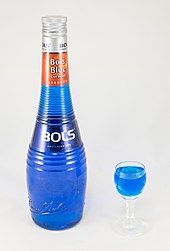 Most of the major liquor manufacturers such as Bols , Marie Brizard , De Kuyper or Giffard have both Curaçao and Triple Sec liqueurs on offer, often in different colors and designs. The Triple Secs include the well-known brands Cointreau (although the liqueur is no longer rated as Triple Sec), Grand Marnier Triple Sec (in the "cordon jaune" variant) and the 2013 Mixology Bar Award for "Spirit of the Year" Pierre Ferrand Dry Curacao . There are also innumerable private labels .

Brightly colored curaçaos were brought onto the market at a time when classic cocktails were hardly in demand and many customers valued more options for color design of cocktails than their taste quality. In addition to red and green, the blue Curaçao, which is colored intensely blue with brilliant blue FCF (E 133) or patent blue V (E 131) , for example, is known. He made it possible for the first time to give cocktails a blue color, since there was no other blue ingredient. Today, cocktails colored with Blue Curacao are symbolic of the drinking culture of the 1980s; a well-known example is the swimming pool created by Charles Schumann in 1978 .

In order to be able to use the success of Curaçao for non-alcoholic mixed drinks, the taste was soon adapted for the production of Curaçao syrups. However, the blue-colored variants are far more successful than the clear ones.

Curaçao and Triple Sec liqueurs are mainly used as an ingredient for mixed drinks, with some Triple Secs in particular also being enjoyed neat. Well-known cocktails with Curaçao or Triple Sec liqueurs are Margarita , Mai Tai , Sidecar , Cosmopolitan , Golden Dream , Brandy Crusta , Between the Sheets and White Lady , in some cases the B52 is also prepared with orange liqueur.

Blue Curaçao is often mixed with orange juice as a long drink called “ Green Meadow ”, “Green Widow”, “Green Frog” or “Green Angel”, poured with sparkling wine or used in the Colada variant Swimming Pool . Besides lemon juice, it is also the main component of the traditional Baden-Württemberg drink "Schüttler".