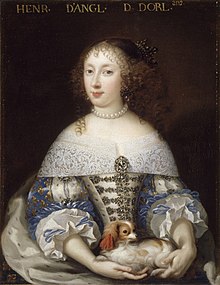 The daughter of Charles I of England and Henrietta Maria of France was brought to Paris by her mother, who was returning to her homeland because of the civil war , when she was only two weeks old , where she grew up in exile and under constant lack of money. She was four years old when her father was executed in London.

Minette developed a deep, loyal relationship with her older brother Charles II , as she was known in the family. As the youngest sister of a king without a kingdom, she had limited marriage opportunities, but made up for this with an in-depth education. With the restoration of Charles' royal dignity in 1660, Henrietta Anne Stuart was a "good match" and on March 31, 1661 married her cousin Philippe of France, Duke of Orléans, Monsieur , the brother of King Louis XIV of France.

Philippe I de Bourbon led a thinly veiled homosexual relationship with the Chevalier de Lorraine called Philippe de Lorraine , and the arranged marriage was unintentionally for him. He got Henrietta Anne pregnant nine times in ten years and otherwise ignored her. Henrietta Anne bore him six children, but only two of them reached adulthood. Under pressure from Louis XIV, who thereby promised himself political concessions from the English royal court, Philippe de Lorraine finally had to leave the court of Philip of Orléans in the Palais Royal and went into exile in Rome. Henrietta had played a major role in his banishment. When Henrietta Anne could no longer endure the public humiliation and the loveless marriage with her husband, she traveled to the court of her brother Charles II in England in 1670. As his advisor, she was instrumental in the secret negotiations on the Dover Treaty . After the negotiations in Dover, she returned to Philip in Saint-Cloud Castle , where she died unexpectedly and in great agony a few days later. This happened within a few hours of a violent fever attack and drinking ice-cold chicory water, which was believed to have antipyretic properties. Due to the perplexity of the doctors, rumors quickly spread that Philippe had poisoned his wife or that the Chevalier de Lorraine had a hand in it.

Since the alliance with England was at stake, an autopsy was ordered on the evening of her death, which was performed by a dozen French doctors in the presence of the English ambassador and a few English doctors. This resulted in colic . Rumors, however, said that the doctors had been bribed because before Henrietta Anne Stuart died, she had actually been given poison , possibly on the orders of the Chevaliers de Lorraine . Contemporary reports admit that Henrietta herself believed she was poisoned, but show reluctance as to whether this suspicion was actually well founded.

The murder thesis was only expressed in writing much later, in 1716 in a letter from Henrietta's successor, Philip's second wife Liselotte von der Pfalz , and from the Duc de Saint-Simon in his memoirs. The former relied on the testimony of a valet that Lorraine had sent the poison to the Marquis d'Effiat through a messenger named Morell, another favorite of Philip's, who had taken Madame's drinking bowl out of the cupboard in the morning and wiped it out with a piece of paper, which he had done Servant wants to have observed. Saint-Simon relied on Attorney General Joly de Fleury, who told him many years after the events that Madame's steward de Purnon had confessed to him that Lorraine had sent the poison to the courtiers d'Effiat and de Beuvron. Purnon himself even admitted this to the king personally during an interrogation, but when asked whether his brother had been involved, he said that he had deliberately not been informed, about which the king was relieved. Shortly after her marriage, Louis XIV also assured Liselotte von der Pfalz that he would never have given her his brother as a husband if he were capable of such a crime; Liselotte also always assumed her husband's innocence. With regard to the cause of death and the possible perpetrators, no further research was carried out. Unfortunately for Liselotte von der Pfalz, the Chevalier de Lorraine was soon allowed to return to the court of Philip because the king had him in hand - also with monetary payments - and in this way exercised control over his brother, who blindly obeyed his lover.

The funeral oration for Henrietta was given by the respected and popular pulpit preacher Jacques Bénigne Bossuet .

After the Stuarts in the direct male line died out in 1807, the descendants of Henrietta were viewed by the Jacobites as Jacobite pretenders to the throne through their daughter Anne Marie . 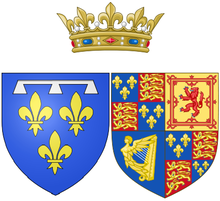