Kurt Aland was the son of Paul Aland and his wife Anna Aland. From 1933 he studied Protestant theology at the Friedrich Wilhelms University in Berlin . He passed his theological exam before the examination board of the Brotherhood Council of the Confessing Church on March 23, 1938. During his studies he worked on the magazine of the Confessing Church, Junge Kirche . In the ideology-critical brochure Wer fälscht? , which was directed against the National Socialist Mathilde Ludendorff , among others , he clearly positioned himself on the side of the Confessing Church. He obtained his licentiate in 1939 from Hans Lietzmann . Unfit for military service due to a war injury (1940), he took over the editing of the Theologische Literaturzeitung in 1941 and, after the death of his teacher Hans Lietzmann, increased professorial duties. In 1941 he completed his habilitation and in 1944 he was ordained a Protestant pastor in Berlin-Steglitz.

Aland's critical attitude towards the Marxist regime in the GDR and his membership and activities in the Spirituskreis led to persecution by the GDR authorities. In 1953 he was taken into custody for three months on charges of smuggling watches to West Berlin . He was also accused of having had contacts with the investigative committee of freedom lawyers and the RIAS . Aland spoke out several times publicly against the oppression of the churches and the freedom of teaching in the GDR. Because of "malicious inhibition of the socialist transformation of the universities" Aland was dismissed on July 14, 1958 by the university without notice. Aland fled to West Berlin in September 1958. Its 8,000-volume library was incorporated into the university library.

In September 1958 Aland initially received an “all-German assistant position” at the Westphalian Wilhelms University in Münster , until he became an associate professor in 1960 and a full professor in 1961. Aland did not accept a call from the University of Chicago in 1960. In Münster he founded the Institute for New Testament Text Research , which he headed until 1983, and in 1979 the Münster Bible Museum , which was unique in the world for many years. With the publication of the Novum Testamentum Graece, known as Nestle- Aland , the institute gained worldwide importance.

Aland's first marriage to Ingeborg Aland had three children. In 1972 he was married to the theologian Barbara Aland in his second marriage . 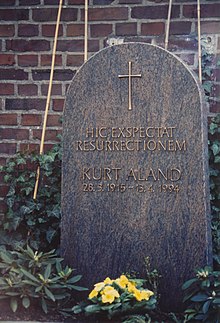 The grave of the theologian Kurt Aland in the Münster Central Cemetery .

In a time of increasing specialization, also within theology, Kurt Aland can be regarded as one of the last representatives of both comprehensive and thorough historical and theological scientific work.

In the field of New Testament textual criticism , his work and that of the Institute for New Testament Textual Research, headed by his wife Barbara Aland after his retirement in 1983, are globally trend-setting. He is the author of a large number of text-critical publications. Most famous is the completely revised edition of the Novum Testamentum Graece (Nestle / Aland) 1979. The focus of his work was the intensive and sometimes adventurous search for old manuscripts, the evaluation of which continues to this day. This text basis serves the scientific work on the New Testament with the aim of the closest possible approximation to the "original text" of the New Testament.

Kurt Aland made several trips, including to the monasteries of Russia and Greece, with which the "discovery" and documentation of numerous New Testament manuscripts was connected. In addition, he worked, among other things, through the Hermann Art Foundation for the Promotion of New Testament Text Research , in which personalities from politics, business and society have gathered since 1964, to promote and support the Institute for New Testament Text Research.

With the Institute for New Testament Text Research, Kurt Aland has shown himself to be a great ecumenist who left the narrow framework of German Protestantism far behind.

Another focus of his work was his church history work, both in the early church area, as in the history of the Reformation, the more recent church history of Pietism and the beginning revival movement. Critics highlight the depth and breadth as well as Aland's extensive knowledge of sources. This gives Aland's individual works on church history a presence and liveliness, which is an important aspect in terms of scientific didactics.

Aland initiated and participated with publications in numerous scientific discussions, among others on the subject of baptism and infant baptism with Joachim Jeremias and Karl Barth , and on the question Did Peter die a martyr in Rome? (Discussion with Karl Heussi ). He discussed the timing and veracity of Martin Luther's 95 theses with Hans Volz , Erwin Iserloh and Klemens Honselmann , as well as the beginnings of Pietism with Johannes Wallmann .

Aland also paid attention to quantitative aspects in historical questions. So he compared the first two volumes of Biblia Patristica and found that there are fewer parallels to the letters of Paul recorded in them for the third century than for the second century.

Kurt Aland was of the fundamental conviction that all historical work ultimately depends on the knowledge, reliability and accessibility of its sources, and he endeavored to evaluate the sources in a balanced manner. He criticized z. B. the tendency among Patrists and New Testament scholars to late dating the origin of individual New Testament texts. It seemed more appropriate to him, within a possible dating framework, to assume a mean value rather than the latest possible date. He made the following recommendation:

"The first reliable testimony from the Church Fathers also means an indication of the time of writing, which must be set two to three decades in advance, at least according to the average values ​​that the historian reckons with."

Kurt Aland's estate is in the archive of the Westphalian Wilhelms University of Münster .

He received the following awards:

Kurt Aland was a member of the following academic academies:

Works on the philology of the New Testament