The Krak des Chevaliers ( Arabic قلعة الحصن, DMG Qalʿat al-Ḥuṣn ; the Arabic name literally means citadel of the fortress ; also Crac des Chevaliers ) is a castle in Syria , the components of which are visible today mainly from the time of the Crusades . It has been part of the UNESCO World Heritage Site since 2006 .

The name Krak probably comes from Syriac Aramaic and means "fortress". A derivation from the Greek word charax , which means “pile work” or “wall”, is also possible. To distinguish it from Krak de Montréal Castle (today Shobaq , Jordan ), the name Crac de l'Hospital ( Fortress of the Hospitallers ) or Crac des Chevaliers ( Fortress of the Knights ) was established.

The castle stands about 30 km west of Homs on a 755 m high foothill of the Alawite Mountains called Jebel Khalil and dominates the Akkar plain, through which the Nahr al-Kabir flows, between this and the Lebanon Mountains . Since ancient times, the valley is used as an important trade route between the coast and interior country. Owning the fortification was of crucial importance for trade, but also for the military security of the region between Tripoli and Homs. Together with the Akkar fortress located about 25 kilometers south on the edge of the Lebanon Mountains and a series of forts and towers, Krak des Chevaliers formed an effective defense system. The closest visible base was Castel Blanc, 15 km away in what is now Safita . 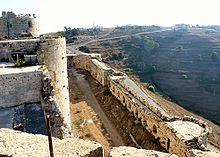 The first historically tangible fortification was built on the mountain in 1031 by the Emir of Homs . It was named Hisn al-Akrād (Kurdish Castle).

In 1099, the army of the First Crusade under Raymond of Saint-Gilles , which was on the way to Jerusalem , reached Hisn al-Akrād. The army occupied the castle and stayed there for ten days before moving on and besieging the city of Arqa . After the crusader army had moved on, the castle came back into Muslim possession.

A few years after the successful end of the First Crusade, Raymond of Toulouse returned to the area and tried to build his own rule. While he was able to take the port city of Tartus as early as 1102, Hisn al-Akrād and the port city of Tripoli offered bitter resistance. After Raimund's death in 1105, his son Bertrand von Saint-Gilles continued his project of establishing the county of Tripoli with the conquest of Tripoli in 1109 . Hisn al-Akrād was conquered in 1110 by the Norman military leader Tankred of Tiberias , who, in competition with the Provencal Saint-Gilles and their county of Tripoli, pursued the expansion of Norman rule to include the principality of Antioch founded by his uncle Bohemond of Taranto .

Time of the crusaders

When Bertrand von Saint-Gilles died in April 1112, his underage son Pons followed him . Tankred died in December 1112. While still on his deathbed, Tankred arranged the marriage of his widow Cecilia of France to Pons, who brought Hisn al-Akrād and several other castles of Tankreds into the marriage. Hisn al-Akrād was henceforth part of Tripoli County. The castle was administered by vassals of the Count of Tripoli, who called themselves "de Crato".

Pons' son Raymond of Tripoli could no longer finance the preservation of the castle and its garrison, which is why he ceded the castle to the Order of St. John in 1142 . Willelmus de Crato was settled with 600 gold Byzantines and land rights. There is no tradition of the appearance of the castle at that time and there are no structural remains above ground. Perhaps there was a high, relatively thin curtain wall with slender, round wall towers - as in other Arab castles of the time.

Two earthquakes, which caused severe damage in 1157 and 1170, prompted extensive construction work on the castle from 1170 onwards. Arab sources say that after the earthquake on the castle hill, no stone was left standing on the other. 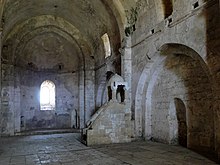 The castle that has now been built was therefore a new building. It essentially consisted of the main tower, the chapel, the gate and the circular wall with a surrounding hall. Three little protruding wall towers strengthened the complex. In the northwest the latrine tower protruded from the wall line. It was integrated into the kennel wall, which probably enclosed the entire castle. There was a bailey in the east. As a special feature of a hilltop castle in such an arid country, the castle had a moat on the south, west and north sides, the remainder of which is the water reservoir that is still present on the south side. 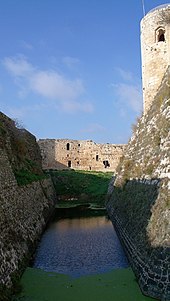 In May 1188, Sultan Saladin moved in front of the castle on his campaign to northern Syria, but renounced a longer siege and had to refrain from attacking Antioch in consideration of the strategic location. This made the castle an effective barrier to the south.

After repeated earthquake damage in 1201/02, the castle was extensively expanded. The west side of the core castle and the towers there were encased to form round towers, the talus was built as an earthquake protection and the outer fence wall was built. The south side of the inner castle received an extraordinarily strong fortification. Three huge towers rounded on the outside were connected by a strong wall. The wall thickness on the middle tower reached eight meters. The handcrafted stonemasonry at the intersection between the south wall and the talus is remarkable . The access ramp to the main castle is secured by a pentagonal tower made of large boss stones . Most of these new buildings were probably completed after just a few years. The construction of the provided with the semi-circular towers outer moat wall was at 1250. There were probably at the time of the Mamluk conquest of the defensive elements of the kennel is not yet fully established. Inside the main castle, the hall was built - also in the middle of the 13th century. It was designed in the high Gothic style and has a representative character. The decorative elements can be traced back to French or antique models.

In the first half of the 13th century, the rule of St. John in Krak des Chevaliers was at its height. This is expressed in the extensive expansion of the main fortress. During this time it often served as a military base of operations against neighboring rulers.

In the second half of the 13th century, the outer kennel wall on the south-east and north-east side of the complex was reinforced. The masonry of this time is of inferior quality and evidently demonstrates the distress and thus the decline of the Order of St. John.

End as a crusader castle

In 1267, Sultan Baibars attacked the Krak des Chevaliers for the first time and captured three castles and 16 fixed towers in the area. In 1271 there was a siege of the castle, in which the Sultan participated personally from February 21st. A mountain ledge about 300 m from the castle was chosen as the location for the Bliden ; today the excursion restaurant is located there. A tower on the south-west corner and the outworks that no longer exist today were damaged by fire. The outwork and a fortification in front of the east gate were taken by the Sultan's army on March 22nd. After undermining , the southwest tower of the kennel collapsed and the Mamluks stormed the kennel on March 31st. The Johanniter withdrew to the inner castle. On April 8, 1271 they surrendered - misled by a forged letter - against the assurance of free withdrawal, which was not kept. 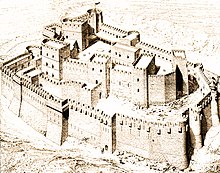 The Krak des Chevaliers in the reconstruction drawing by Guillaume Rey, 1871. It shows the maximum expansion stage around 1290 with numerous buildings by the Mamluks.

The damage caused by the siege was quickly repaired. The repair points can now be identified using different masonry technology. Both round towers were rebuilt, especially on the southern Zwinger wall. The east gate was re-clad and raised, the access ramp was vaulted. Two lions, the heraldic animals of Baibar, were carved over the portal on the west side. Sultan Qalawun finally had a square tower built on the south side of the outer wall in 1285.

Development in the 20th and 21st centuries

1921–1922, the Frenchman Camille Enlart visited the Krak des Chevaliers. He was followed in 1926 by the architect Maurice Pillet , who removed the first fixtures. On November 16, 1933, the building was bought by France. Paul Deschamps (1888–1974), who first stayed on the Krak on April 11, 1926, published his standard work Le Crac des Chevaliers with Geuthner in Paris in 1934 . Étude historique et archéologique . Extensive restoration work took place from 1934 to 1936 under the direction of Pierre Coupel , and further fixtures from the Ottoman era were removed. In a state treaty between France and Syria, the two countries agreed on the return on February 7, 1949. The Syrian antiquities administration commissioned the architect Georges Kalamkarian with the further restorations. 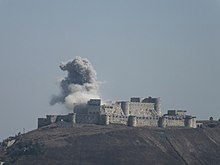 The facility during an air raid in the 2013 civil war.

During the civil war in Syria in 2011/12, the castle was occupied by insurgents. Devastation occurred during the occupation and, in mid-July 2013, air strikes by government forces led to further destruction.

On March 20, 2014, government troops retook the castle and the nearby village of al-Hosn after air raids. At least 40 rebels were killed. In August 2015 it was announced that the fortress has reopened to tourism and that guided tours are being offered there.

The Krak des Chevaliers is - from the point of view of the Occident as well as that of the Orient - an outstanding symbol of the Crusader era . The castle has been and is being transfigured and romanticized in the past.

The castle has been a UNESCO World Heritage Site since 2006 . At the same time, the Saladinsburg was also on this list. In June 2013 the Krak des Chevaliers was added to the UNESCO list of endangered cultural assets.