Outside staircase to the tower entrance from 1684 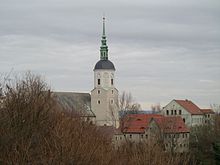 The Protestant Marienkirche zu Dohna is a late Gothic three-nave hall church in the district of Saxon Switzerland-Eastern Ore Mountains in Saxony . It is located on the west side of the market square on the "Taschenberg" near Dohna Castle and is the city's most important architectural monument.

Foundation of the Church

Christian Bartsch, pastor in Dohna, wrote about the founding history of the church in 1735:

[…] And one has from the Vossio and Desserio news in appendices that they started to build by Burgrave Ottone the Elder under the reign of the Roman Emperor Friderici II in 1212: But only in 1250 the building was completely completed and inaugurated in the honor of the Blessed Virgin Mary and the consolation of Peter as from this an old indulgence letter on parchment with 14th red seals in origine on local parish to be found in it the Pope Innocentius 40th days indulgence promises those who devotion, prayer, pilgrimage with the Church in Dohna performed on public holidays or something venerated to the church is dated 1357 d. October 10 in documents P […].

This letter of indulgence testifies that the first church was consecrated to Mother Mary and the Apostle Peter .

The first church, a Marienkirche and later a pilgrimage church , was built near the protective ancestral castle of the Donins on the "Taschenberg" in the early 13th century. The first church building was completely changed through renovations and extensions. Nothing can be seen of him today.

The late Gothic three-aisled hall church was built in 1489 by an unknown master builder on the site of the previous church and corresponds to the appearance of today's town church. The hall construction with star rib vaults was supported by six round pillars (two pillars were added when the hall was later extended). The ornate late Gothic font dates from the time the church was built (1489).

The three-story winged altar with colored and gold-plated figures in high relief is a wood carving created in the late Gothic style. Its artist and workshop are unknown. During the restoration in 1928, the year 1518 was found. The wings are worked on both sides. The closed wings show four saints, including St. Nicholas at the top right . (In Saxony, St. Nicholas was the saint of traffic, to be found in churches on old trade and traffic routes.)

The most significant tomb is in the northeastern prayer room . It shows the standing figure of the knight Hans von Carlowitz , who is known for staging the last feud in Saxony, the so-called Saukrieg (1555–1558).

Renewal of the church

In the years 1833 to 1843 the restoration of the church took place under the direction of the Dresden academy professors Joseph Thürmer (1832-1833) and after his death Gottfried Semper (1836-1843). The extension of the ship by six meters to the west, the extension of the windows and entrances, the formation of the roof and the exterior architecture go back to Thürmer. Under Semper the wooden galleries were built in, the choir restored and the interior design carried out.

An organ with 28 registers from the Eule company from Bautzen has been playing in the church since 1896 . In 1913 electrical lighting was introduced and the church was completely redesigned. Another restoration of the interior of the church took place from 1995 to 1999. During this work, Semper's interior painting was restored. The church tower was restored between 2001 and 2003.

The bell consisting of four bronze bells was renovated with the bell cage in 2003. The bronze bell from the time of the burgraves, which stood on the sandstone plinth in front of the church until 2001, is again in the church tower next to three new bronze bells. Below is a data overview of the bell: