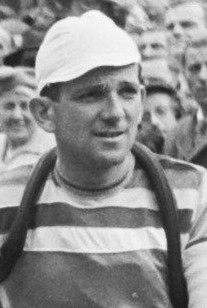 Diederich got his nickname Bim when he was 16 years old when he worked in a pharmacy and sold the sexual enhancer "Yohimbine", or "Joe Bim" for short. Since 1937 he was a member of the Union Cycliste Pétange (UCP) and drove his first race in 1939. In July 1947, he switched to the professional camp.

He had his greatest sporting success in the Tour de France of 1951, when he rode in the Maillot jaune for three days and won the stage from Reims to Gand . At the time, he duped his three companions on the Geraardsbergen wall , which is notorious among cyclists , which is why he was also called "Duc de Grammont" (Grammont = French for Geraardsbergen).

In 1954 he drove his last race, the Tour of Luxembourg , in which he finished 11th. Then he ran a bicycle workshop in Pétange .

Diederich is the father-in-law of the cyclist Lucien Didier and the grandfather of Laurent Didier .

In his hometown, the community has set up a gallery with memorabilia from his sporting career in the local sports hall in his honor.