This article describes the cycling event. For the current event, see Vuelta a España 2019 . For individual years see here . 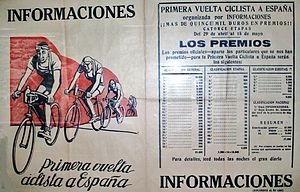 Display of the first issue

Vuelta a España 2004 in Saragossa

The cycling race Vuelta Ciclista a España , shortly Vuelta a España (Germanized: Tour of Spain ) is one of the three "Grand Tours" ( Great tour ) in cycling and after de tour France and the Giro d'Italia the most important stage race (21 stages) of World. From 2005 to 2007 the race was part of the UCI ProTour . Since 2011 the race has been part of the successor series UCI WorldTour .

Held for the first time in 1935 and annually since 1955, the Vuelta takes three weeks in alternating routes across Spain and neighboring countries. After the tour of Spain initially traditionally took place in spring, its date was moved to September in the mid-1990s .

The Spaniard Roberto Heras (2000, 2003, 2004, 2005) holds the record with four overall victories at the Vuelta . Behind them with three overall victories are the Swiss cyclist Tony Rominger (1992–1994) and the Spaniard Alberto Contador (2008, 2012, 2014). The race, which was overshadowed by the Tour de France among the German public, was won by three Germans: Rudi Altig in 1962, Rolf Wolfshohl in 1965 and Jan Ullrich in 1999. Marcel Wüst is the most successful German stage hunter with 12 stage wins. Overall, however, the Spaniards dominate, having won 32 of the 68 editions of the Vuelta so far (August 2014). The Swiss Alex Zülle was the second Swiss to win the overall rankings in 1996 and 1997, and he can also book most days in the gold jersey.

The course of the race is always made up of flat stages , which the sprinters favor, medium-difficulty stages , which are suitable for breakaway groups, and high-mountain stages on which the tour is decided. In addition, there are usually two individual time trials. The overall very wavy profile of the Vuelta meant that in its history mostly strong climbers were able to prevail in the overall individual ranking. The destination of the Vuelta is traditionally the Spanish capital Madrid .

In 1999 the ascent of the Alto de Angliru in Asturias was mastered for the first time , which with its extraordinarily steep ramps of up to 24 percent is considered one of the most difficult climbs in a cycling race and has now become the trademark of the Vuelta.

The Vuelta a España is held according to the regulations for stage races of the World Cycling Federation UCI and the special regulations of the organizer, which partly change from the event.

The leader of the overall standings wears the Maillot Rojo (German red jersey , since 2010) - the Spanish counterpart to the yellow jersey of the Tour de France. The jersey color of the overall leader has changed frequently in the history of the cycling tour:

A special feature of the Vuelta was the combination rating. In this evaluation, the total of the placements in the overall, mountain and point evaluation was taken into account. The combined ranking was first held in 1986. After it was discontinued in 1994, it was repeated from 2002 to 2018. With the exception of 2005, when the leader's jersey was gold and green, a white jersey was awarded.

In 2009 the Vuelta reached German territory for the first time on the third stage near Emmerich .